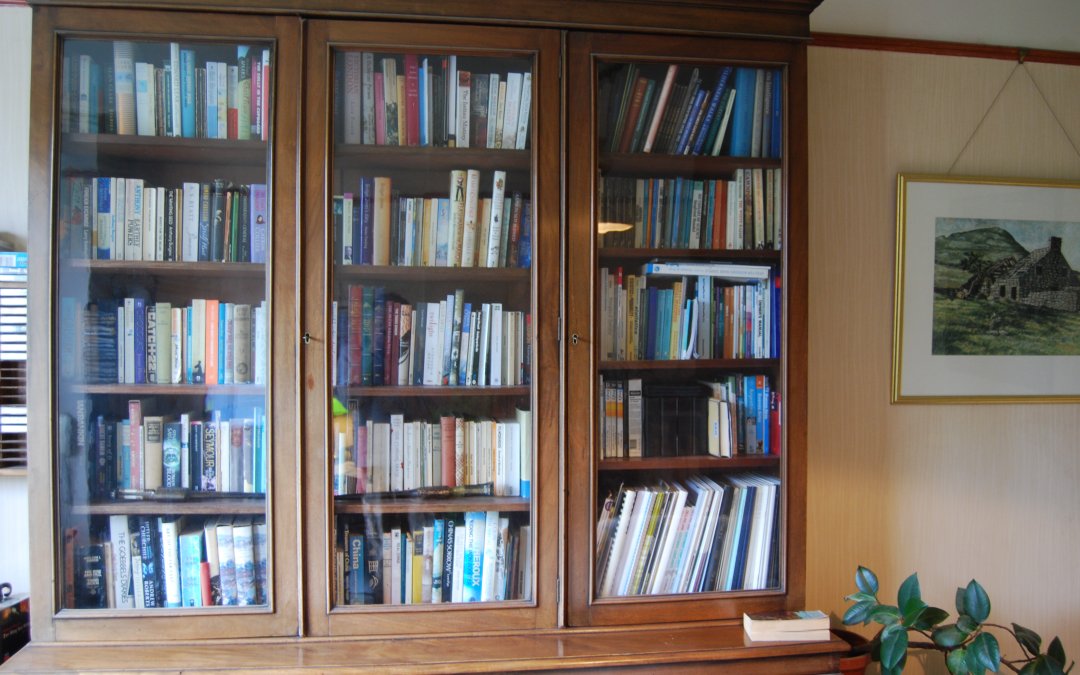 Book covers seem to have become something of a theme here recently with lots of authors, like me, launching new copies of their books and suddenly developing a fascination with cover design. I thought that this week I’d have a look at the modern development of book covers, thus neatly combining the sudden enthusiasm for looking at covers and the historical theme of my blog. That’s my excuse anyway. Mostly it’s really an excuse to show some pretty pictures of books.

From ornament to marketing tool

Books, they say, do furnish a room.

Once those books would have been fine leather-bound volumes, the embossed trim and the gilded titles complementing the dark mahogany of the bookcase.

Time passed and leather bindings became a thing of the past. Now books were more utilitarian, with card covers. These covers were no longer decorative and not necessarily protected in glassed bookcases. So we got the dustjacket, a paper cover that guarded the card cover from damage. These could be quite plain. This is a comparatively decorative one.

When paperback books became more popular they originally had the same relatively plain covers as the dust jackets. Penguin famously changed all that with the introduction of brilliantly coloured covers, the different colours originally being linked to different types of content – yellow for psychological novels, green for crime, dark blue for biography, cerise for adventure, red for plays and in this case orange for fiction. The covers originally had a grid design with the title and the penguin logo like this:

Gradually, though, more illustrations were introduced.

Paperback design became an art in itself, both decorative and part of the business of selling the books. Book covers became a practical sales tool as well as, in a return to the days of leather bound volumes, a decorative element. Books once again came to furnish a room. In fact, there are companies that will supply books purely as decorative items, such as booksbythefoot.com whose website features this example of book covers as ornament.

Booksbythefoot.com is concerned only with the spines of the books, but the covers can be works of art. Dust covers have followed the design lead of paperbacks and, especially on large “coffee-table” books they can incorporate beautiful images.

The artwork on paperbacks has become increasingly elaborate, but at the same time often quite formulaic, with different types of cover clearly representing different genres. Here are a couple of non-genre (“literary”) covers.

Interestingly, The Last Days of Leda Grey was given a much more genre specific “romance” cover when it was released for mass-market publication.

The most elaborate and striking covers, unsurprisingly, are often those of graphic novels where cover designs can be so significant that the books often include an appendix with additional covers, some of which are spectacular images in their own right.

This can even lead to the rather strange situation where a hardback cover has a dramatic decorative image which is then protected by a dust cover with another startling image. By now any functional, marketing, rationale for the cover is consumed in the effort to produce a book which is in itself ornamental in appearance so we’re back to the idea that the covers are mainly there to furnish a room.

Book covers are practical in that they keep the books from falling apart. These early 19th century volumes are bound copies of separate plays, all protected by being placed in “proper” covers.

They are, however, also ornamental. The tooled spine and gilded title go beyond anything that is strictly required to protect the pages.

In time the ornamental aspects came to serve a double function – aesthetically pleasing but also selling (sometimes aggressively selling) the book. Here we see books that represent historical, romance, and action/adventure genres. All are reasonably typical (though the James Bond design is a little dated). All are aiming to be reasonably decorative, but this is subordinated to the selling message.

When I came to commission new covers for my ‘James Burke’ series, the designer used a typeface and layout that is generally recognised by potential buyers as fitting the ‘historical fiction’ genre.

Compare this with the work the same designer did for my one non-historical novel – a supernatural contemporary story.

The images and font could hardly be more different.

Are these covers more use or more ornament? Obviously they are designed to sell the books, but it is doubtful that the additional sales of an e-book priced at under £3.00 will cover the significant cost of the cover. But to me, like many authors, the cover is the face that my baby shows to the world, and I want my baby to be as pretty as possible. The cover is practical, certainly, but it is also a thing of beauty – an ornament to any bookcase.

The two James Burke covers are from books that are being relaunched ahead of the publication of two new stories in the James Burke series later this year. They will very soon be joined by the third story featuring James Burke, Burke at Waterloo.

Dark Magic was published last October and is a departure for me. It’s comedy horror and Amazon reviews suggest that it makes people laugh and shiver. It was huge fun to write and lots of people seem to think it’s fun to read. It’s just £1.99 and you can buy it here: mybook.to/DarkMagic.

You can read about all of my books (with buy links via Amazon) on the book page on this website: http://tomwilliamsauthor.co.uk/my-books/