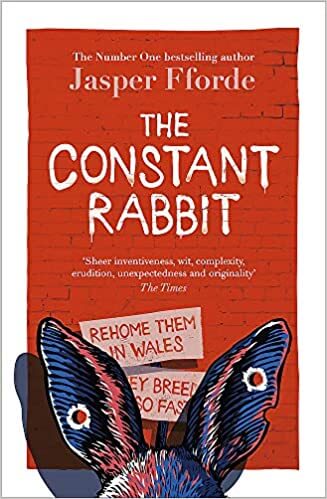 I’ve enjoyed work by Jasper Fforde before, so I was delighted when I got a copy of his latest, ‘The Constant Rabbit’ through NetGalley.

How to begin to talk about this joyfully eccentric work? I suppose the most important thing to say is that I absolutely loved it. Beyond that, it’s difficult to say anything that will sound remotely coherent to anyone who isn’t familiar with Fforde’s particular style of outlandish humour. This is a book set in a world populated, alongside humans, by anthropomorphic rabbits. The story is told by Peter Knox, who had met a rabbit, Connie, at university and fallen deeply in love. Not that his love was consummated or even, as far as he knew, requited. But when Connie turns up at the library where he volunteers for the six minutes it is open every fortnight, he wonders if he might ever be able to rekindle their relationship.

Things look up for Peter when Connie moves in to the house opposite. There are problems though. Connie, it turns out, is married and her husband, Major Rabbit, is a military veteran and crack shot. Peter earns his living working for RabCoT, the Rabbit Compliance Taskforce. RabCoT is part of the government response to the Event, when anthropomorphic rabbits first appeared. It is fair to say that the government’s prime objective is not to improve life for rabbits. Since the electoral success of UKARP, fiercely anti-rabbit, RabCoT has been enforcing increasingly restrictive rules governing rabbits’ opportunities in human society. RabCoT is aided in this by anthropomorphic foxes, created by the same Event. It is fair to say that Fforde does not view the foxes sympathetically.

Will Peter’s love ever be reciprocated? Will Connie’s husband demand satisfaction in a duel? (With pistols: notions of honour are very traditional in the rabbit community.) Will RabCoT succeed in rounding up all the rabbits to work in a MegaWarren, specially built on the Welsh borders?

It’s a surprisingly gripping story. There is rather more violence and rather less sex than you might expect in a story about rabbits, but there are fascinating details about Peter Lorre (who played Ugarte in Casablanca and had bulging eyes), the car driven by Jake and Elwood in The Blues Brothers (a 1974 Dodge Monaco), and the name of the character played by Jenny Agutter in The Railway Children (Roberta but known as Bobby). If random side-tracks like this are not for you, you probably should avoid this book. It even has footnotes (with more than a nod to Terry Pratchett).

Is this just random silliness, or is there a point to it all? The library that is open for six minutes every fortnight should give you a clue: “the UKARP Government’s much-vaunted Rural Library Strategic Vision Action Group had kept libraries open as to per their election manifesto, but reduced the librarian staffing levels in Herefordshire to a single, solitary example working on greatly reduced hours – which meant that each of the county’s twelve libraries could be open for precisely six minutes every two weeks.” Yes, we are maybe talking satire here. Maybe satire drives the whole story. Fforde gives us a further clue:

“The Event does have all the trappings of satire” I said, “although somewhat clumsy in execution.”

I’d say ‘unsubtle’ rather than clumsy, but given that we live in an age where we have a Prime Minister whose response to national disaster is to quote Latin very badly at bemused audiences, I think the time for subtle satire has long since passed. And if unsubtle satire suits you (think Spitting Image with less sympathy for the establishment and more furry animals), then this will suit you very well indeed.

It races on like a bunny in a marathon (yes, there is) and may sometimes get carried away with its own exuberance (there are what look suspiciously like traces of an entire sub-plot that has been excised leaving just some odd, unexplained details) but it holds together surprisingly well. I found the ending both unexpected and satisfying. And it has the advantage that, quite apart from the satire, it is genuinely laugh out loud funny.

It’s not published until 2 July. I’d pre-order it now.