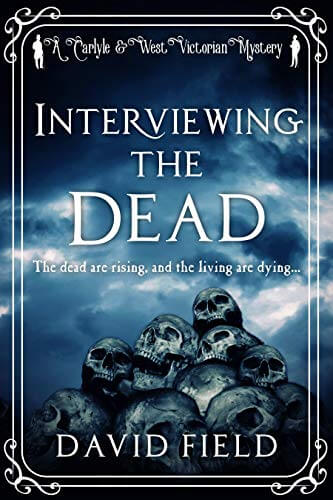 It’s been an exciting week, with the relaunch of the Burke series. Burke in the Land of Silver came out on Kindle last week, with the paperback following any day now. This means my blog has inevitably been ruthlessly focused on plugging my own books, but I’m taking a break today to write about another book that came out last week – Interviewing the Dead.

Field does a nice line in Victorian murder mysteries. I was at first a bit put off this one which seemed to be more fantasy than murder mystery: the dead walking among us, revenging themselves on Londoners because of the disturbing of a plague pit during the construction of the Aldgate Underground Station. (The station was opened in 1876: the London Underground system is a lot older than most people imagine.) It turns out, though, that I was simply taken in like the Victorian victims of this elaborate and deadly hoax. But how come honest men and women are seeing the dead rise from their graves?

It turns out that there is a totally rational explanation. Methodist preacher, Matthew West, teams up with Dr James Carlyle (a student of Dr Bell, the model for Sherlock Holmes) to help Detective Inspector Jennings solve the mystery. The plot allows a lot of fun contrasting the strictly scientific approach of Dr Carlyle with West’s more spiritual views on life. There’s a great deal of arguing about religion and the best ways to help London’s poor, which allows a bit of exploration of some of the social issues of the time. Carlyle’s daughter, Adelaide, provides the love interest. A strong, independent woman who assists her father in his lab work, she dabbles in politics and supports the suffragettes.

There are elements of liberal cliché in the approach to these social and political issues. The strong (but clearly lovable) independent 19th century woman struggling to make her way in a man’s world seems a fixture in books like this. I’m beginning to wish we could have just one heroine who only wants to run the house and have babies, not because these are admirable qualities but because they were, I think, quite common at the time. What with Adelaide wanting to go into politics and West’s sister trying to become a magazine illustrator, I think that the cutting edge of feminism is perhaps over-represented.

In the end, though, this isn’t a social history or a philosophical essay on the role of religion in late 19th century philanthropy: it’s a detective story and a pretty good one. There’s sufficient reference to social issues to embed it thoroughly in its time and Field has written enough Victorian detective stories to know his period. It reads well and the characters are sympathetic. If they sometimes seem caricatures of their “types” that is, I think, one of the difficulties of writing the first in any series. As readers (like the writer) become more familiar with them, there is room for growth and I expect they will become more rounded as the series goes on.

The plot is convincing (though perhaps more sophisticated than is entirely credible given the limitations of the villain when he is unmasked). Good triumphs; bad people get their just desserts; love may well find a way. In the end, what more can you ask for in a detective story?