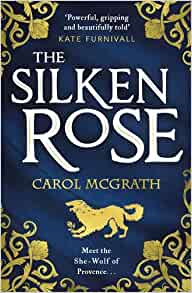 Carol McGrath’s latest is a fictionalised biography of the life of 13th century Queen Ailenor, wife of Henry III. You probably know her (if you know her at all) as Eleanor but McGrath prefers the alternative spelling.

I knew practically nothing about the 13th century when I started this book and I was certainly massively better informed by the end. It is packed with politics and personalities as well as details of everyday life.

McGrath used to teach history and her knowledge of the period is evident throughout the book. It is a great primer for anyone wanting to understand the power plays of the medieval period and the importance of marriages to bind together the families that controlled the countries of Europe. At the top, King Henry’s marriage ties together England and Provence, just as his daughter’s marriage will, in time, bond Scotland to the English throne. Further down the social scale, the marriage prospects of the embroideress, Rosalind, are viewed by her tailor father as a way to further his business connections, as his own marriage with a widowed haberdasher has.

The web of family relationships that marriages produce can bind the prosperity of a tailor to the political success of an earl. The personal is always political, the political always personal.

The book reminds us that England and France shared ties of blood as well as economic and political alliances. Tracts of what is now France were the property of King Henry, while Scotland then was a foreign country. And over all, there was the Church, a separate and mighty power, able to mobilise armies as well as threaten excommunication to those who crossed it.

Money, too, was central to the relationships in this book. Money has to be raised so that money can be spent. The church must be taxed and God appeased by ever more extravagant buildings. Henry is building Westminster Abbey and the nation is paying for it. Unrest is calmed with acts of extravagant generosity but stoked when taxes are raised to pay for them. Earls are, essentially, bribed to support the king against other earls who will, in turn, demand bribes of their own.

It’s a chaotic, dangerous world, in which Queen Ailenor often retreats to shelter amongst her own ladies, dressed in the finest gowns, eating food flavoured with spices imported from thousands of miles away – a life of unimaginable luxury, not only intrinsically desirable but necessary if she is to retain the status and authority of her role.

McGrath’s book offers an insight into a lost world. It almost makes the world of today’s political and economic powers look sane by comparison.