Cover reveal: Burke and the Bedouin 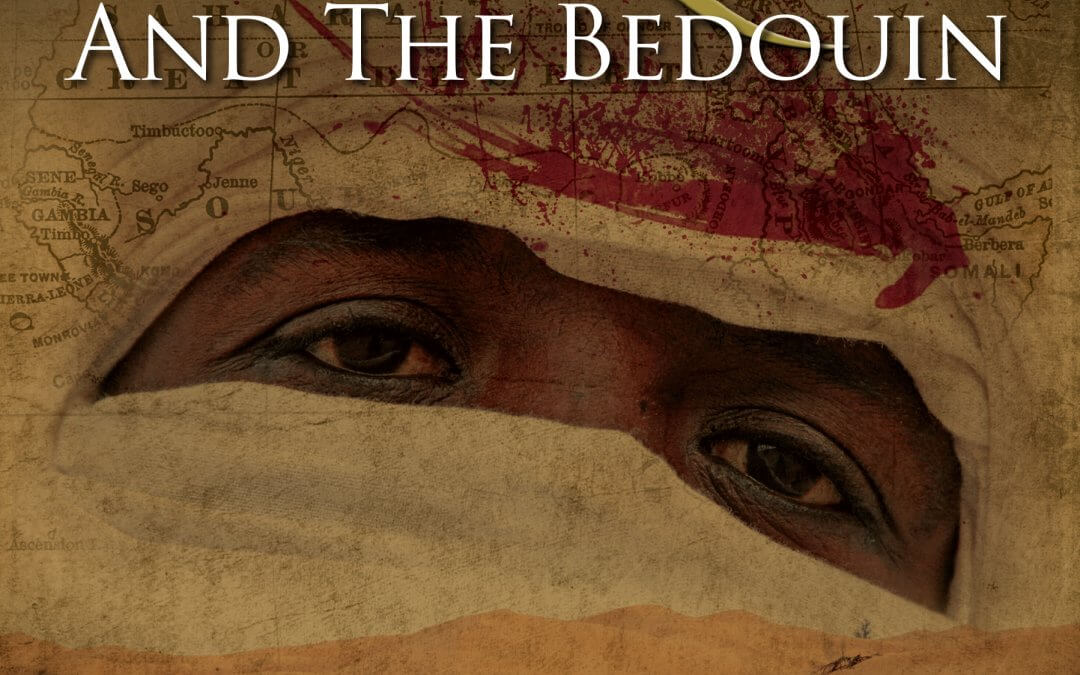 So here it is! The cover for the rerelease of Burke and the Bedouin.

I’m really excited about this cover – the latest for me by Dave Slaney. And I’m delighted that people have already been tweeting to say they’re looking forward to seeing it. I hope they like it as much as I do.

The Eyes Have It

Some people were not overenthusiastic about this design because it features eyes. In the dim and distant past there was a sort of rule that you didn’t put eyes on book covers because they could be seen as rather threatening. Then somebody realised that humans are hard-wired to notice eyes so covers with eyes on them get a disproportionate amount of attention. They are (and I’ve tried so hard to avoid this phrase) more eye-catching. People may find them mildly disturbing but they do notice them and that’s the important thing. The result was a zillions of covers with eyes on. So many that there is even a Pinterest pin for ‘Eyes on the cover’ (and thanks to Amanda Merlos for putting that together).

The result of this deluge of eyes was a reaction against eyes on covers, even though some original cover designs featuring eyes were critical as well as commercial successes. For example, the Smithsonian Magazine singles out Francis Cugat’s cover design for The Great Gatsby as “one of the more prominent literary symbols in American literature”.

I was tempted to have eyes as the unifying theme for all the covers on the Burke series, but it really didn’t work out. We went for maps in the end (a suggestion I first made to Accent, who were Burke’s original publisher and whose cover designs I thought were very impressive). Burke and the Bedouin was the only one that ended up with eyes. It’s a striking design and I hope you like it.

What’s inside the cover?

I’m relaunching Burke and the Bedouin as I spruce up the first three Burke books ahead of two new ones coming out later this year. (I wrote more about this earlier this week, so I won’t go into that again.) Burke and the Bedouin was the second book about James Burke and it was written purely as an entertainment. While Burke in the Land of Silver made a gentle nod towards the problems that arise when you send an army to ‘liberate’ people from their own government (Iraq was fresh in my mind while I was writing), there is no sub-text at all to Burke and the Bedouin. It’s designed purely as entertainment and, although the history (Napoleon’s invasion of Egypt and the defeat of his navy at the Battle of the Nile) is solidly factual, Burke’s adventures are total fantasy. There is a beautiful girl to be rescued, dastardly French spies to be defeated, and even a treasure to be found. Despite the bloodshed (and there’s a fair bit of that), it’s essentially fun. (One of my favourite Amazon reviews says, “In spite of the violence the book has a light air to it.”) It must have done something right: my royalty statements suggest it was the most commercially successful of the three Burke books.

Preparing this book for re-publication meant reading it for the first time since it was originally published in 2014. Re-reading old books can be a nightmare for a writer, but I must admit that I really enjoyed it. I had forgotten an awful lot of the plot and I was caught up in Burke’s adventures, trying to remember what happened next. And, though it’s always dangerous to admit to finding your own work amusing, I did enjoy passages like this, where the ever-reliable William Brown is summing up Burke’s plan to collect information from some French spies he has discovered:

‘So we meet up with our Arab friends, raid the camp, truss up the Froggies, have a nice little chat with them, and then head home.’

‘You have, as ever, William, summed up the situation in a nutshell. You should have been an officer.’

‘It’s the book learning, sir. I’m more a hit-them-in-the-goolies-and-run-away kind of bloke. I rely on officers like you to write it all up nice afterwards.’

Burke and the Bedouin is now available in the same edition (with the same cover) in both the UK and North America (and, indeed, everywhere else). It’s being published on Kindle next Tuesday (14 July) with the paperback along soon after. You can pre-order the e-book now for £2.99: mybook.to/Bedouin.