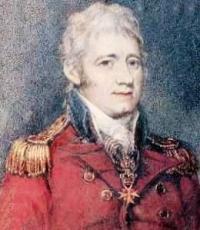 As promised last week, I bring you more on Sir Home Riggs Popham, the man who took it upon himself to take an army to South America in 1806 on the grounds that there was a city worth invading and he had some spare men to invade it with. (It’s the incident that Burke in the Land of Silver revolves around.)

Popham’s exploits are so implausible that I don’t expect you to take my word for it, so here is proper historian (and historical novelist) Lynn Bryant to tell you more about the man. Take it away, Lynn. That’s ‘Weigh anchor and cast off’ in Popham’s world.

The mad but glorious world of Home Riggs Popham

During a recent interview on a Napoleonic history blog, I was asked if I had come across any real historical character that I would never write in fiction, because he would be too unbelievable. I didn’t have to stop to think about this one – Sir Home Popham, who features as the antagonist in both books in my Manxman series, was a real person, which is just as well because I would never have had the nerve to make him up.

Popham was a naval officer, a controversial figure during his own time, who is best remembered for the system of naval signalling that he designed in around 1800, which was eventually adopted as the Admiralty standard in 1812. There was a lot more to Popham, however, than a naval officer with a scientific bent. During his forty two years in the navy, he was a prisoner of the French, was accused of being a smuggler, was promoted at the request of the army, gained and then lost the favour of Tsar Paul of Russia, was investigated for fraud, became an MP, and was court martialled for an apparently unauthorised invasion of South America. That is not an exhaustive list of Popham’s activities.

So how did a younger son of an unremarkable family come to play such a significant role in political and international spheres in the late eighteenth and early nineteenth century? I suspect the key to Popham’s success lies in his usefulness. Popham was highly intelligent and a talented organiser, with a genius for logistics and this placed him in an excellent position to find favour not only with the navy, but with the army. During his career, he acquired a reputation for being the man to call on during joint operations and was frequently consulted in the planning of campaigns.

In 1794 Popham was appointed agent for transports at Ostend for the Flanders campaign. It was a job to which he was ideally suited and Popham made the most of it, winning the patronage of the Duke of York, who eventually wrote to the First Lord of the Admiralty requesting his promotion to post-captain. 1798 found him in Ostend during the invasion threat, and the following year he was sent to St Petersburg where he successfully persuaded Tsar Paul to provide troops for a proposed landing in the Netherlands. Later that year, Popham was once again in charge of an evacuation during the Helder campaign and while the expedition was unsuccessful, Popham came out of it with his reputation further enhanced. He was elected to Parliament in 1804 and sat for various constituencies until 1812.

The breadth of Popham’s assignments is astonishing and an apparently simple job often turned into something more complex. A straightforward command of a troop ship during the Egyptian campaign led to a commission by a secret committee of the East India Company to negotiate trade treaties with the sheriff of Mecca and other Arabian states as ambassador directly responsible to the governor-general of Bengal, Lord Wellesley. In 1804 he was involved in the extraordinary work of Robert Fulton in developing naval mines. And at the end of the year, he sailed as commodore and commander-in-chief of an expedition to take the Cape of Good Hope with a force under General Sir David Baird.

It should be no surprise by now, to find that with the Cape in British hands, Popham did not stick to his official orders to remain in Table Bay to guard against a possible French attack. Instead, he decided to take his forces to attack the River Plate in South America. There is no evidence that Popham had any authorisation for this invasion, but in 1806, he landed his troops near Buenos Aires. The city fell to English forces under Beresford, but this early success did not last, and in August the Spanish took back the city, imprisoned Beresford’s men and left Popham facing recall and a court martial.

Popham’s 1807 trial ended with an inevitable guilty verdict, but surprisingly he was let off with nothing worse than a reprimand, undoubtedly due to his friends in high places. Further postings followed; Popham was Captain of the Fleet during the Copenhagen campaign in 1807, and performed the same function although without the title, during the Walcheren campaign of 1809 when he was heavily involved in the planning of what turned out to be a disaster for the British forces.

Once again, Popham managed to negotiate the ensuing Parliamentary inquiry without formal censure, and with his reputation officially intact, but there is a sense that Popham was running out of friends. Prime Minister William Pitt died in 1806 and Lord Melville, Popham’s long-time patron, died in 1811. Melville’s son took over at the Admiralty in 1812 and Popham was sent to northern Spain to co-operate with the guerrillas and conduct a naval guerrilla warfare against the French in support of Wellington. He was highly successful at this, keeping an entire French army ‘distracted’, and capturing Santander.

Popham was keen to be sent back to Spain in 1813 to continue his work, but he was not. He was promoted to rear-admiral, but he was not employed on active service again, ending his days in a miserable posting as commander-in-chief in Jamaica, where he suffered from yellow fever, lost two of his children to illness and finally suffered a stroke. He died soon after his return to England in 1820.

So what went wrong for Popham? There is no doubt that along with his many talents, Popham had a genius for making enemies. Lord St Vincent, who was First Lord from 1801 to 1804 openly loathed him, and there are endless letters and memos from Popham describing his sense of persecution. Popham was also unpopular with many of his fellow naval officers. This may have stemmed from his early promotion to post-captain at the behest of the army, and there was a furious protest from several very senior captains in 1807 when Popham was appointed Captain of the Fleet ahead of them.

Popham was a relentless self-publicist. He was undoubtedly good at what he did, but his compulsive need to announce his successes in pamphlets, news reports and endless letters to the government and the Admiralty, seems to have infuriated even his supporters. Lord Wellington was genuinely pleased with Popham’s success in northern Spain in 1812 but was less impressed to find that Popham was sending direct reports to the English press and expressed it with typical Wellington candour in a letter to Lord Bathurst.

“It might have been as well also if Sir H Popham’s exultation upon the success of his operations in diverting the attention of the enemy from me had not been published. I mention this, because I know that the French act a good deal upon any information from our papers which they deem at all authentic.”

By the end of 1812, Popham’s career was in decline. His expertise in planning was offset by his tendency to oversell his schemes, and he was quick to abdicate responsibility when things went wrong, as in Walcheren. His reputation for financial irregularity may or may not have been deserved, but accusations dogged him throughout his career, and there was a sense of “no smoke without fire” which made him appear untrustworthy. Popham was an intelligent and inventive officer who punched above his weight in terms of influence at the heart of government foreign, military and naval policy for many years, but he could be arrogant, self-important and disastrously indiscreet. I suspect by 1813 he had simply run out of influential friends.

There is so much more that I’d like to know about Popham. There is one biography of him, A Damned Cunning Fellow: Eventful Life of Rear Admiral Sir Home Popham, by Hugh Popham, which was published in 1991, and Dr Jacqueline Reiter is currently working on a new study, and has been generous in sharing her insights as I grapple with my fictional version of Popham. Popham appears in both books in the Manxman series and makes a very brief cameo appearance in my new book, An Unmerciful Incursion which will be published on July 31st 2020. Popham is pure gold for a novelist, and I love writing him, so he will definitely return in all his glory in book four of the Manxman series, which is set during his 1812 campaign in northern Spain.

Lynn Bryant was born and raised in London’s East End. She studied History at University and had dreams of being a writer from a young age. Since this was clearly not something a working class girl made good could aspire to, she had a variety of careers including a librarian, NHS administrator, relationship counsellor, manager of an art gallery and running an Irish dance school before she realised that most of these were just as unlikely as being a writer and took the step of publishing her first book.

She now lives in the Isle of Man and is married to a man who understands technology, which saves her a job, and has two grown-up children and a Labrador. History is still a passion, with a particular enthusiasm for the Napoleonic era and the sixteenth century. When not writing she spoils her dog, reads anything that’s put in front of her and makes periodic and unsuccessful attempts to keep a tidy house.

Lynn Bryant is the author of the five books of the Peninsular War Saga, set in Wellington’s army, and the two books of the linked Manxman series, which follows the fortunes of a Manx navy captain.

You can find Lynn on her website at http://www.lynnbryant.co.uk/ or on social media at the following links.

Burke in the Land of Silver (featuring Popham) has been republished and is now available as an e-book and in paperback.