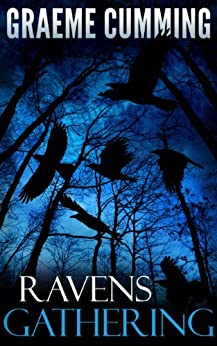 I’m taking another break from plugging Burke in the Land of Silver (it’s really good, just buy it already) to give a bit of a lift to Graeme Cumming’s excellent Ravens Gathering.

When Graeme offered me a copy of this book I had to tell him it was not at all the sort of thing I usually read. It seemed churlish to refuse, though, so I loaded it onto my Kindle intending to give it a quick glance when I have absolutely nothing to do sometime around 2050.

I looked at the first page to make sure that the download had worked and I was drawn in almost immediately. Looking back, the prologue (yes, I know some people won’t read books with prologues but some of my own have a prologue, so get over yourselves) is one of the least satisfying bits of the book. When I first read it, though, all I was aware of was that the words flowed and the drama made me want to know what happened next. What more can you ask of a thriller?

I say “thriller” because it’s an exciting work of fiction without literary pretensions, but it’s difficult to stick it firmly into one genre. In the end, it’s a fantasy novel, but the fantasy elements are embedded in a lovingly created real-world setting. The whole story takes place in the village of Ravens Gathering, an isolated spot straight out of a horror movie. There is The Major Oak, a pub where the regulars have their own seats and the presence of strangers causes an immediate lull in the conversation. There is a village idiot and an ineffective vicar. There is a pub landlady who is a flirt and a post-office that is a hot-bed of gossip. All the characters are sketched with enough detail for us to remember them, despite the number of individuals featured.

The detail of “everyday life” is carefully built up. When the police are involved, the book even moves in the direction of a police procedural crime novel until we are suddenly precipitated into a full-on fantasy which makes The Exorcist look a model of restraint. The thing is that by now we believe in the place and the people, so we are prepared to suspend our disbelief in an increasingly lunatic train of events that I’m not going to spoil the book by detailing.

If you are not generally in the market for fantasy adventures, but open-minded enough to give one a go, I strongly recommend this one. (But do feel free to buy a copy of Burke in the Land of Silver first.)