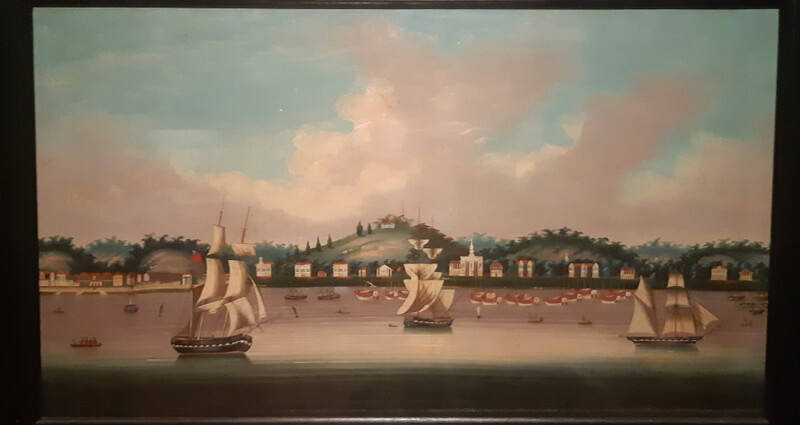 Last week’s blog post ended with James Brooke, Victorian merchant-adventurer, setting off to the Far East on his ship, the Findlay. It was to be, he hoped, an expedition to bring both pleasure and profit. In fact, it was a disaster. The whole enterprise was ill-conceived.

The Findlay expedition is the starting point for my book, The White Rajah. My narrator is a seaman, hired for the voyage. As an experienced sailor (which Brooke was not) he could see immediately what the first of the mistakes is.

The Findlay was to be no gentleman’s pleasure yacht but a working ship, paying her way on the short but busy passages between the islands of the Indies. With all her pretty paint, her toil would be much the same as that of the colliers I had sailed for ever to and fro between Newcastle and London. Such work could well be handled by a schooner, but the Findlay was a brig. The square rigging took a full crew to handle. There were 32 seamen and a full complement of officers and officers’ servants, making the Findlay an expensive ship to run.

As it became increasingly obvious that the Findlay expedition was never going to be profitable, rows between him and the Master – a professional seaman – became more and more vicious, until eventually Brooke decided to give up the enterprise and return to England, leaving the Findlay in the East.

That should have been that. Brooke should have learned the lesson of his youthful escapades and settled down to responsible employment. But Brooke seemed incapable of settling down to anything. His father’s pension meant that there was no urgency in finding alternative employment and he remained in England doing nothing in particular. Not that long after his return, though, his father died, leaving him with enough money to relaunch his idea of voyaging in the Far East.

He had originally intended to buy a schooner and he was now in a position to do so. In March 1836 he offered £2500 for a 142 ton ship, the Royalist. The illustration below is not the Royalist, but a schooner rigged vessel very like her. You can see how much less rigging there is.

It was, Brooke wrote:

… as trim a craft as you could wish, ideally suited to trading in these waters. As if to demonstrate she was no mere merchant, though, she mounted six six-pounders and a number of swivel guns. Most important, her mainmast carried the White Ensign, for though she was a private vessel, the Royalist belonged to the Royal Yacht Squadron and, in foreign ports, she had all the privileges of a man-of-war.

Because a schooner has so much less rigging, it is much easier to handle and Brooke needed a crew of just 19.

After a proving trip in the Mediterranean he set off again in December 1838. He had announced that he was to sail to the South China Seas where the Royalist would ostensibly work as a trading vessel. Trade, though, was never his primary goal. For him the emphasis was on adventure. At the time Britain and the Netherlands were disputing for advantage in what was then called – tellingly – the Dutch East Indies. Brooke had decided that the power of the Dutch was in decline and that now was the time to expand British influence in the area and that he was the man for the job. He would sail to Singapore, which Raffles had recently developed as the centre of British influence in the region, and using that as his base, he would explore into Borneo.

Luckily for him, he arrived in Singapore at the ideal time to build links with Borneo The political buzz there was all about Muda Hassim. Raja Muda Hassim was the Bendahara of Brunei. The Bendahara is an administrative position within classical Malay kingdoms comparable to a vizier. Essentially he runs the place, though he is nominally responsible to the Sultan. However, the legitimacy of the Sultan lies with the bendahara. If you think of Muda Hassim as the Sultan of Brunei, you will be hopelessly wrong in terms of the formalities of the Brunei court, but you’ll have a fair handle on the realities of the situation.

Anyway, a few months before Brooke’s arrival in Singapore a British brig called the Napoleon had been wrecked in Borneo. Muda Hassim had treated the crew with every courtesy, fed and clothed them at his own expense, and arranged for their safe return to Singapore.

This is how my narrator viewed the situation in The White Rajah:

In part of the world where piracy was still widespread and where a lost sailor was an easy victim for all manner of thieves and rascals, this was more than a common politeness. It reinforced suggestions that the Sultan was tired of the way the Dutch were lording it over the China Seas as if they had a divine right to colonise the place. If he were cooling toward the Hollanders and turning toward Britain as the rumour said, then Borneo offered wonderful opportunities for trade … opportunities the merchants of Singapore would be anxious to exploit.

As you have probably already realised, Brooke was not a man to set out a plan and stick carefully to it, but rather somebody always more than willing to take advantage of any change in his circumstances to strike out in a new direction. He decided to seize this opportunity to develop a relationship with Hassim.

Back to The White Rajah.

[Brooke] came up with the idea that [Hassim] should be thanked in a formal letter, beautifully penned by one of the Governor’s clerks on the finest parchment available – which in Singapore, in those days, was probably not saying much.

The letter was produced and ceremonially signed by the Chairman of the Chamber of Commerce and half the nabobs of the European community. Mr Brooke undertook to deliver it personally and, on the strength of the goodwill generated, persuaded the Governor to produce an official introduction for him which, taken together with the White Ensign fluttering proudly from the Royalist’s mast, was likely to suggest his expedition had more authority than an impartial judge might understand to be the case.

On Saturday, 27th July 1839, the Royalist slipped quietly away from Singapore and headed East to Borneo.

Brooke had taken the first step on the road to running his own country.

As you will have gathered from the passages quoted above, my novel The White Rajah is based quite closely on the adventures of James Brooke in Borneo. It is an exciting story but it also tells you a lot about the history of British influence in the South China Seas in the mid-19th century.

British colonialism (though Brooke’s personal kingdom was never technically a colony) was neither the unmitigated good that it was presented as up until the late 20th century, nor the straightforwardly exploitationist affair that we are often told it was nowadays. The White Rajah tries to tell a good tale while exploring some of the moral nuances of the Age of Empire.

The White Rajah is available in paperback or, in this age of lockdown, is rather more easily obtained on Kindle where it is ludicrously cheap at 99p. Click on mybook.to/TheWhite Rajah.