A Crown in Time: Jennifer Macaire 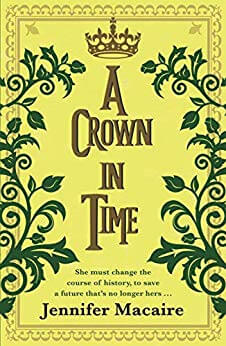 Publicity about this book talks about somebody being sent back in time to save the Crown of France, but it’s not an actual physical crown that she is sent to save. Rather, she has to save the life of one young man whose descendants will eventually become rulers of France.

The plot’s immaterial, really. The book is mainly an opportunity to explore the world of the 13th century. There’s a bit of history about the Crusades, but mainly it’s social history. What was it like to live then? Dull, if the truth be told. If you want to get from A to B you walk. If you’re lucky and rich, you may ride. There’s a lot of getting from A to B in this book. Walking or riding, travelling takes a very long time and for most of that time nothing really happens. According to this story your journey may be broken by occasional extreme violence and quite a bit of sex, but much of the sex will be boring too. (A huge shame as Macaire’s other books include some brilliant sex scenes, both erotic and hilarious.) If your journey takes you across the sea, you will do it in a boat which, lacking portholes, will mean being shut up in a small, dark cabin. Inevitably this is, once again, dull stuff until you are caught in a storm when it is extremely unpleasant and for many of the travellers, fatal.

Our heroine’s journey takes us to Tunis, on the Eighth Crusade. There are a couple of battles, but little detail of the military goings-on. There is rather more detail of the aftermath – the dead and dying and the general unpleasantness of war. As with most wars at the time, disease is an even greater threat than the enemy and when the army returns to Europe (more storms, more dull travelling) it’s a great deal smaller than it was when it left.

All that sex results in pregnancy. (We are told that people are very relaxed about sex, but I doubt that that is true given that the danger of pregnancy – and the terrible consequences if unmarried – must have discouraged most young women from casual encounters.) Our heroine ends up with a baby, but no husband. Awkward. Fortunately, love (in the form of a kind older man) conquers all and we have a happy, if hardly politically correct, ending.

A Crown in Time is a great introduction to the 13th century and Macaire is certainly more fun to read than a school textbook. There’s more than a little school textbook in it, though, the narrator often commenting on life at the time, with even the odd statistical snip:

“Childbirth was the main cause of death among women at that time, with one-third of the deaths of adult women due to complications.”

Read it if you’ve always wanted to know more about 13th century France or if you enjoy exploring new worlds in an undemanding story.

A Crown in Time