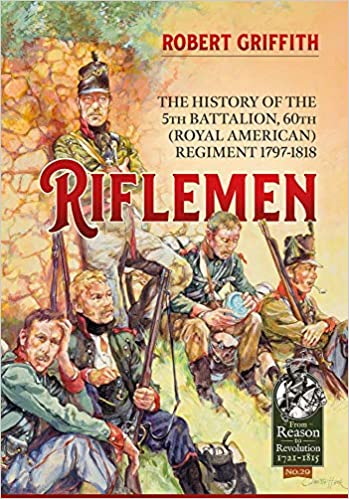 While I’ve been self-isolating (one very mild case of coronavirus in the house, over now) I’ve had the chance to finish Robert Griffith’s Riflemen, a history of the 5th Battalion, 60th (Royal American) Regiment.

The first thing to say about this book, and the most important, is that it is very, very good. Technically it’s not the first history of the battalion, because a couple were produced early in the 19th century, but it’s the first modern history.

I’m not an academic historian, so I’m probably not the right person to say how these things should be done, but this seems a remarkable piece of historical research. Rob has spent a spectacular amount of time with army pay lists and battalion details in the National Archives. This book is the product of a considerable amount of original study. (I know that reviews don’t normally refer to the author by given name, but Rob is a well-known figure on the army historical research scene and calling him anything else just seems odd.)

The 5/60th was formed in December 1797. Originally made up mainly of German (or vaguely Germanic) soldiers, it introduced many of the practices that distinguished rifle regiments, from tactics to the green uniform at a time when most British troops still wore scarlet. The 5/60th served the British Army until 1818 when it was lost with a reduction of the number of battalions in the 60th. Its impact on light infantry tactics, though, remained for many years.

The 5/60th was formed at a time when the 60th operated mostly in the West Indies – regarded as part of the Americas, hence the American (later Royal American) regiment. It was because the regiment served mainly in America that it was seen as a safe place to man almost exclusively with foreign soldiers, often with their own foreign officers. Despite this, the 5/60 first saw action in Ireland during the 1798 rebellion. Later it saw active service in Surinam and garrison duty in Nova Scotia as well as the West Indies. It was the Peninsular War, though, that made the reputation of the 5/60th (though the 95th Rifles is the regiment best remembered nowadays, partly because of the efforts of the fictitious Sharpe). The battalion was awarded 16 battle honours for its campaigns in the peninsula and across the Pyrenees into France. It was still fighting at Toulouse when Napoleon abdicated in 1814.

I have to admit I did not find this an easy read. It has over 400 pages and there are three distinct but interwoven threads throughout. Firstly, it is the story of the men who served. Rob provides an astonishing amount of detail about individual men, from their lives before joining the regiment, through their service with brilliant insights culled from court-martial records, to the time and nature of their deaths. Detailed accounts are sometimes given of the medical treatment they suffered (and I use the word advisedly) before their deaths and these can make uncomfortable reading. I had the pleasure of listening to Rob lecture on the men of the battalion at the National Army Museum. In many ways it was better than reading the book, because anecdotes about real people bring home the reality of the times so well.

The second strand is information that puts the battalion into the wider military context. We get details of the need to build up the army and how this was done, how men were recruited and trained, with a lot of detail on the tactics that were taught. There’s a discussion of the rifle and the way it was loaded and fired. (Lying down with your feet to the enemy and firing from that position is counter-intuitive but apparently could work.) We learn about garrison life in various colonial outposts and how officers lobbied for, or bought, promotion. There is a lot about life on campaign with details of provisioning, medical treatment and arrangements (or the lack of arrangements) for sheltering the troops. If you are interested in the nitty-gritty of life in Wellington’s army – mainly, but not exclusively, the light infantry – this is a must.

The second strand, in particular, comes and goes with whole chapters on various aspects of military life interspersed with a chronological account of the campaigns of the 5/60th, which are inevitably dominated by the Peninsular campaign. It helps, I think, if you already have some idea of Wellington’s war. I imagine most readers will, and when Rob is talking about a battle I know or I place I’ve visited, I found the accounts enlightening. Without that background, though, the incessant marching, counter marching, flanking, advancing and retreating can just become something of a blur. It’s massively better than my ‘O’ level history (where the Peninsular War, for some unfathomable reason, featured heavily) but still not nearly as clear as some fictional accounts. (Lynn Bryant’s Peninsular War saga, for example, gives staggeringly accurate and understandable accounts of many of the battles.) Riflemen does benefit from some nice maps, though occasionally significant details are missed off. Rob also adopts the standard use of differently shaded blocks to separate cavalry and infantry with colour distinguishing the British and French forces. Sadly, the maps are all in black and white, leaving room for considerable confusion and far too many jokes about shades of grey.

I have always been interested in how Wellington moved from the often defensive warfare, largely in the south and west of Spain, to taking the war to the enemy and crossing the Pyrenees and this book gives a good overview of this. I do understand now why so many writers seem to overlook what should be a dramatic end to the story of the campaign. In fact, the move into France seems to have been very scrappy with few clear victories and defeats and even more marching to and fro than in Spain, but now with the added bonus of extreme cold. I honestly struggled with this bit, but I don’t think it’s Rob’s fault. Almost 400 pages in, accounts of the tides on the Adour robbed me of the will to live. I think the soldiers (with rather more excuse) were beginning to flag too. A disproportionate number of the 5/60th died in these last weeks of the war while the French, fighting on their home ground with decent numbers of men, were unable to turn the tide. I think both sides knew the war was over and were by now going through the bloody motions without conviction. The weariness the reader may well feel at this point is probably a fair reflection of the subject matter.

Obviously I found some parts of this book better than others and, for me, it could well have been a bit shorter. But other people will be gripped by exactly the bits I skimmed over while they may find the accounts of courts-martial (all gripping stuff in my view) irrelevant and dull. The fact is that this isn’t really a book to read carefully cover-to-cover (unless you are a very serious military history nerd, in which case your dreams have all just come true). It’s the definitive history of one battalion which had a disproportionate role not only in the war against Napoleon but also in developing the infantry techniques of the British Army. It’s an astonishing work of scholarship and an invaluable reference for anyone with a serious interest in this period. If you have a passion for almost any aspect of the British Army of the time, there will be something in this book for you.

Robert Griffith is to be congratulated on this excellent work.

My interest in the Napoleonic era stems from the research that I’ve done for my books about James Burke. Burke was real person and although most of his adventures are fictional a lot of research goes into making the backgrounds authentic (though nothing like the level of research that Rob Griffith does). Eventually it gets to the point where I spent more time writing stuff like this than I do writing fiction. (I am working on a non-fiction account of the background to Waterloo, if anyone knows a publisher who might want it.) Nobody pays me for writing these blog posts, although I do now accept donations if anybody wants to buy me a coffee. What I would really appreciate, though, is if you bought one of books. They are all available on Kindle and cost £2.99 or less.