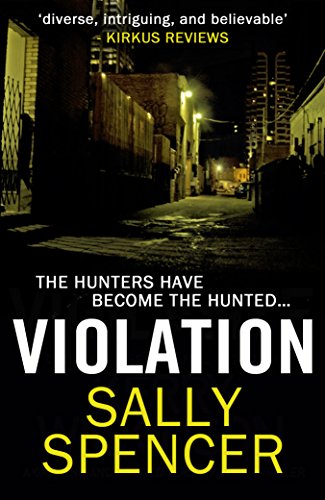 My publishers, Endeavour Media, are running a promotion on Sally Spencer’s books. I started reading her because of her Inspector Blackstone mystery series set in Victorian London, but she also writes contemporary crime fiction. As part of the promotion, Endeavour are giving away one of her contemporary thrillers, The Vital Chain, so this seemed a good time to post a review of one of her other contemporary stories that I wrote a couple of years back.

Spencer is British and most of the stories I’ve read are set in England (as is The Vital Chain) but Violation is firmly established somewhere in the American rustbelt. Our hero (and first person narrator), Mike Kaleta, is an East Coast liberal who has moved to this tiny town where his wife’s father is the mayor. His marriage, though, has collapsed and he is now a liberal fish out of water in a police department staffed largely by thugs and headed up by an idiot. The only exception is Caroline Williams. Rule-bound and officious as she is, the only woman on the detective force is, inevitably, attractive.

Kaleta and Williams are set to work together to solve a series of paedophile sexual assaults. I must admit to finding the detail of some of these assaults quite unpleasant and I’m not sure how suitable this kind of crime is for what is, essentially, a lightweight novel. Still, the seriousness of the crime does provide some grist to what might otherwise be an overly predictable tale of corrupt officials, dirty cops and a heroic committed crime busting team. At first I thought the story, which pulls up every cliché of hard-boiled crime fiction, far too predictable. (Kaleta’s romance with Williams is inevitable from the moment that he tells us how much he hates her whilst trying to guess what her legs look like under her uniform.) I suspect Spencer would say that she was aiming for homage rather than rip-off and eventually I decided that she does pull this off. She’s not Raymond Chandler but her style has wit and a hard-boiled humour. Turning down a courtesy blow-job from the town whore, Kaleta says, “I hate to look a gift-mouth in the horse.” In a story-so-far aside he tells the reader, “Only a couple of days ago I forced two cops off a cliff, and now I’ve sunk to lying. By tomorrow I’ll probably be stealing from the cookie jar.” More importantly, the prose bowls along, carrying the reader with it. As the plot develops it becomes a little less predictable than you might have expected, although anyone paying attention will have spotted the evil villain more or less when they first appear with “Evil Villain” stamped across their forehead. Still, the twist at the end is worth waiting for and I found that, for all my reservations, I had genuinely enjoyed the read. I’ll probably read another (for a sequel is as predictable as Kaleta’s enthusiasm for bourbon).