The swords on my latest cover 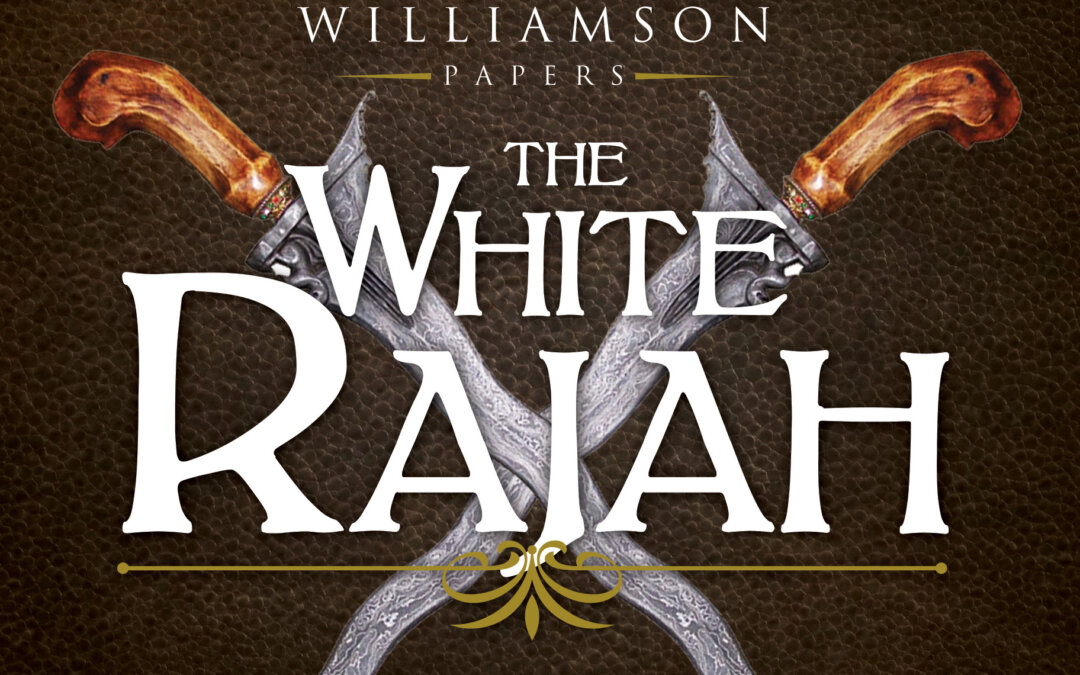 I do love the new cover for The White Rajah. It’s another by Dave Slaney, who consistently produces lovely work. This one features a kris, a traditional weapon of South East Asia. The White Rajah is set in Borneo where the native Dyaks are under the rule of Malays. The Malays traditionally carry the kris and kris do feature quite a lot in the story. I’ve blogged about them before, but perhaps it’s time to revisit the subject.

I first came across kris on holiday in Borneo. This was the holiday where I discovered James Brooke, so kris and Brooke have always been linked in my mind.

What exactly are kris? Most are really too long to be called daggers but too short for swords. In the UK they’re usually depicted (as in the cover illustration) as wavy, though they come in a variety of shapes and sizes with marked differences from one area to another. Some old kris are as small as any dagger and the largest are the size of a sword. There isn’t even any agreement about how it should be spelt. Although ‘kris’ is the usual English spelling, I have also often seen it spelt ‘keris’. Wikipedia throws up even more variants: ‘cryse’, ‘crise’, ‘criss’, ‘kriss’ and ‘creese’, although these appear obsolete terms used by European colonists. Generally, the usual spelling in the West is ‘kris’, while ‘keris’ is more popular in the East.

Despite the variety of spellings, sizes and shapes, kris are easy to recognise. What are the attributes that define them?

The first thing is that all kris have, to a greater or lesser extent, “watered” blades. I’m going to write a lot more about this in a separate post, which is likely to appeal to a more specialist audience, but for now I’ll just say that the watering here is produced by a technique called ‘pattern welding’. Although the pattern can resemble that seen in the famed damascene steel, these blades are produced by a completely different technique and are vastly inferior in quality. They are quite beautiful though.

Some legends say that this pattern, known as the “pamor”, is made by the waves of the hair of a spirit inhabiting the blade. In fact, the waves are the result of the kris being made from thin bars of iron or steel which are beaten together. I’ll be writing separately about how these and other blades are made in a post for sword/metallurgy geeks.

The top of blade is wider on one side, maintaining a sharp edge. The other side is decorated with a curl in the metal, which resembles an elephant’s trunk (the ‘belalai gajah’). A good example of this is shown in figure 2. FIG 2. Detail of a Kris Ksay Cantrik from Jogjakarta, Java.

The widening of the blade allows it to form a guard (the ‘ganja’).

Some people suggest that the shape is derived from the shape of a stingray’s ‘sting’. The idea is that people used the sting as a weapon and then produced metal weapons based on the same shape. Unlikely as it is, the oldest kris are very small and thin and the resemblance there is more marked.

The details of the decoration at the top of blade vary considerably.

The tang (the bit of the blade that fits into the hilt) is very narrow. This is a significant weakness of the kris as a weapon. European sailors fighting natives armed with kris would typically use a belaying pin (essentially a large, heavy stick) to disarm their opponents by striking the kris blade, which would snap at the tang.

The hilts are usually made of wood, often kemuning, which some people claim has magical qualities. Weapons owned as status symbols may well have hilts of horn, ivory (elephant or walrus) or bone.

The hilts of kris are always carved into symbolic decorations, often with a religious element. Many hilts represent the garuda bird, which carries the god Vishnu in Hindu myth. Sometimes these images are elaborate, but, in many cases, they are very stylised and can appear quite plain. Examples of two extremes of decorative style are shown below. A particularly interesting type of hilt is tajong, known in the West as a “Kingfisher” hilt. This is characterised by a long “beak” extending from the end of the hilt. Carving these takes considerable skill, and such hilts are rare. The workmanship would have made them valued when they were originally produced, but their scarcity nowadays means that they are worth considerable sums to collectors.

Although Western collectors attach great significance to the hilts, it is important to remember that the culture is that produced the kris saw the true magic and value of the weapon as lying in the blade. The blade will be preserved as the furniture is changed. This is particularly the case with kris that have been traded by collectors. It is common for hilts to be removed from blades so that a particularly good hilt can be matched with a particularly good blade to make a more saleable piece.

Kris sheaths are also distinctive. Sheaths are made of wood, although they may be covered with a metal sleeve. The end of the sheath might be tipped with a chap of bone or ivory (the buntut). They are distinguished by a wide wooden crosspiece (the sampir) which protects the guard of the weapon. This is often described as “boat shaped”. The sampir may be a relatively functional rectilinear shape or an elaborately carved piece of decorative work. The kris as a spiritual object

Kris are valued as spiritual objects. Although there is some uncertainty surrounding their origin, it is likely that the very first kris were the kris majapahit. ‘Majapahit‘ refers to the Majapahit Empire, which was based on Java in the 14th to 15th centuries. The very first kris were made when iron was a rare and precious metal. Early kris may well have been made of meteoric iron. They were very small, and may have been intended for use in religious ceremonies, rather than combat. The symbolic carving of the hilts reflects their continuing religious links.

Traditionally, the manufacture of kris was surrounded with ceremonies reflecting the fact that the early smiths were practising an art which was viewed as as much magical as technological. Some stories say that women smiths would temper the blade by drawing the red hot metal through their vulva before throwing it into water. Another version says that every kris would be tempered by being stabbed into the body of a prisoner, so that a person would be killed for every kris that was made.

Although kris are functionally defined by their use as weapons, they have always been much more than that. Often beautifully decorated (sometimes with gold worked into the surface of the blade) and with hilts and scabbards so ornate as to make them almost useless for fighting, kris are symbols of status, and of craft and cultural values at least 700 years old. Collected enthusiastically by Europeans (especially the Dutch), they can still be found and bought at affordable prices in the markets of Malaysia and Indonesia. The huge variety of styles and the stories that go with them make these a source of continual fascination to any traveller in the region.

About ‘The White Rajah’

The White Rajah is the first of three books about John Williamson. Williamson is a fictional character, but his adventures take him into the lives of some very real historical figures. The White Rajah is quite closely based on the life of Sir James Brooke. Like the true story of his life, it raises issues about colonialism and our attitudes to what we now call Third World countries. But like his life, it also has pirates and rebellions and battles. And there’s an orang-utan who, if I’m entirely honest, probably wasn’t there in real life. It took quite a long time to research and write and is available for pre-order on Kindle at £3.99. You can use this book link to buy it, wherever you are in the world. Please do.