Another Tuesday Book Review: ‘Not Having It All’ 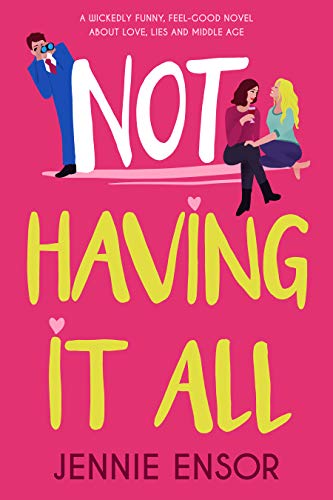 Email has led to something of a revival in the epistemological novel and Jennie Ensor’s latest, Not Having It All, combines email, snail mail, psychological case notes and diaries to tell the story of Beatrice Hudson, self-styled “stranded scientist, make-do mother and weary wife”.

As you might suspect from the number of (fictional) sources it draws on, this story sprawls a bit. While Bea is definitely the central character, we get almost as involved in the life of her best friend, Madeleine. Madeleine is an artist and free spirit who excites suspicion in Bea’s husband, Kurt, lust in Colin (we’ll get to him) and fascination in her psychoanalyst.

Madeleine is around a lot during this story as Kurt is off on business in Istanbul, leaving Bea to cope with four year old Fran, with only the part time help of au pair Katie. Madeleine is often by to help out with Fran, who alternates between being an angelic infant and a truly awful child, often referred to by Katie (understandably) as ‘Little Fiend’.

There is not only a huge cast of characters (I haven’t even mentioned Bea’s sister, Allie) but their lives are all filled with incident. Bea is a neuroscientist leading a small team on the fringe of a breakthrough in understanding the neuroscience of phobia. I was fascinated by the details of the experimental technique and the possible underlying neural pathways behind arachnophobia, but then I did actually study neuroscience at university. I suspect many casual readers may be surprised to get a lecture on the anatomy of the brainstem in the middle of a comic novel, but it’s more readable than my undergraduate texts and you will at least come away, as they say on the BBC, educated and informed as well as entertained.

My university course also touched on Jungian psychology and while Bea is a convincing neuroscientist, Madeleine’s analyst, Nigel Rowley, appears to have discarded Jungian theory almost entirely. Perhaps that’s why he is having doubts about his chosen career. Madeleine seems to bring that out in people – or maybe she is just drawn to troubled men. She meets Colin just as he is (from the noblest of motives) about to embark on a substantial insurance fraud.

It says a lot for Jennie Ensor’s writing (and the joyous gusto with which she attacks her plot) that we have no trouble in keeping track of these character and even the more incidental figures, like Colin’s brother, Gary, whose seduction of Colin’s wife ended the marriage. Would that all my friends had such interesting lives. On second thoughts, perhaps it’s best they don’t.

I couldn’t possibly start to describe the plot because I keep putting spoilers in my reviews and by now I get hate mail. Plus it is so gloriously over-the-top as to defy summary. I can tell you that Allie (the sister, remember her?) gets bitten by an emu, leaves her husband and runs off with a singer ten years younger than her. Other characters exploring their sexual boundaries join a swingers club or experiment with lesbianism. It’s an alternative, I suppose, to the alcoholism that some of them teeter on the edge of.

This book should be a desperately trying-too-hard mess, but it’s actually very readable and bits are utterly hilarious. I started off annoying my wife by reading her some paragraphs as she was trying to get on with her own book and she was impressed enough to add this her TBR list – a massive honour as books I recommend are generally rejected out of hand.

So there you are: it shouldn’t work, but it does. Enjoy!