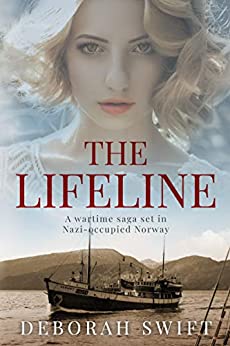 I seem to have built up a backlog of book reviews, so, having told you I’m cutting back, I’ve been forced bring back my Tuesday reviews, at least for this week, and maybe next, depending on how quickly I read. I have a cover reveal scheduled for Friday (look out for it!) and then a new book to talk about, so Deborah Swift’s latest gets its place today.

I’ve read a few of Ms Swift’s stories before, mainly set in the 17th century. She usually likes to spend quite a long time setting the scene before there is an lot of action on the page.

This story could hardly be more different. It’s set in German-occupied Norway in 1942 – practically contemporary compared with most of the other books of hers I’ve read, though this is her third book set around the Second World War. And we are thrown into the action practically from the first page when Astrid discovers her boyfriend sending radio messages to England.

Jorgen Nystrom is a radio operator for Milorg, the Norwegian Resistance. He has survived longer than most but now the Germans have tumbled him and they are waiting to arrest him on his return home, so Chapter 2 starts with his desperate escape with Germans firing at him as he flees.

We never find out how his cover was blown. (Perhaps the fact that Astrid stumbled in on him transmitting suggests he was getting a bit careless?) It doesn’t matter. Deborah Swift has done a lot of historical research on the Norwegian occupation, but no time is being wasted in scene-setting here. We are on the run with Jorgen, whose only chance of escape is to get the Shetland Bus: one of the fishing boats that run the unbelievably dangerous passage from the Shetlands to Norway, carrying arms and agents in one direction and refugees in the other.

We are now into a traditional war story, replete with the tropes of heroic escapes from villainous Nazis. Jorgen doesn’t have an easy time of it and if his desperate flight on cross-country skis touches on the edge of James Bondish implausibility, Swift does allow us to see him as vulnerable and even, worn down by hunger, cold and exhaustion, sometimes frail.

We have two main villains: an evil Nazi-sympathising policeman, Falk, and his agent, Brevik, a star skier who is sent to catch up with Jorgen, befriend him and penetrate the Shetland Bus network. Falk is a Nazi villain from central casting, “too short, too tubby and without the good looks that made men like Nystrom’s life so easy”. Brevik, though, is a much more interesting character. Lacking any political commitment or moral compass, he manages to fool everybody that he is a Resistance hero. I’d have liked the story to have made more of him. He is an excellent villain and I can’t help feeling that a lot of his potential is wasted.

Meanwhile, back in Oslo, Astrid is resisting the Nazis in a less dramatic but, for my money, much more heroic way. She is a teacher and when the occupying Germans insist on the Nazification of the educational system, she is one of the organisers of a school strike.

We see a lot of the casual violence of the Nazis, with hostages rounded up and shot in the street, teachers sent to labour camps in the far north of the country and the persecution of Jews. Astrid’s position is as dangerous as Jorgen’s and she doesn’t have the comradeship of Milorg to fall back on. In fact, her one contact in the Resistance makes it quite clear that when push comes to shove, she is on her own.

Eventually, with the Nazis trying to arrest her, and a Jewish father and daughter she has taken in to save them from deportation, Astrid, too feels she has no choice but to make a run for the Shetland Bus.

Will Jorgen make it to the Shetlands? Will Astrid escape too and meet him there? Wil their love triumph against the horror of the times they live in? I’d love to talk about this (there are some interesting twists and turns) but I’ve been accused of spoilers in the past, even when commenting on stuff that seemed blindingly obvious to me early in a story. So I’m not going to make any detailed comments on the plot. I will say that you are unlikely to be shocked by any of the twists, but they do keep things lively.

This book reminds me of the sort of war story I read as a child in the 1960s. It’s not the kind of thing I would usually read now, but I think it will appeal to people who like this traditional approach to WW2. It is a lot better than most because Swift has brought her historical writer’s approach, so the background in Norway is convincing with a wealth of detail that most people will be unfamiliar with. The Norwegian occupation is not something we are very aware of in the UK. We prefer our Resistance fighters French.

Given the solid research, it’s unfortunate that the publishers, Sapere, have, for some reason, hidden the historical note away behind the back matter. The true story of the teacher’s strike, in particular, deserves to be better known. Sadly, Swift’s story illustrates a painful truth: it is much more exciting to fight with guns and dodge enemies in the forest than it is to commit yourself to civil disobedience. In something that Swift has written to promote the book she quotes someone saying that the teachers who faced possible death in the labour camps reminded themselves that soldiers fighting the Nazis faced death every day in the same cause and, if the soldiers could take it, so could the civilians. I wish she had put these words in the mouth of one of her characters. As it is, skimming through the book as I wrote this review, I was struck by how many pages there are of derring-do and excitement compared to the pages about teaching the old curriculum in defiance of the ever-present danger of arrest by the Nazis. It’s understandable – writing extended passages about being cold and hungry and frightened but plugging along with teaching times tables to small children would be an enormous creative challenge. It’s sad, though, that as in real life it’s the men who get to be heroes while the women who plod away doing the right thing without support or recognition are just the ones who get left behind. That’s not Deborah Swift’s fault, but when we ask why so many people let Nazism happen, that’s a good part of the answer. All that is necessary for evil to triumph is for good men to play with their boy toys and leave the real resistance to the women.

So, how do I feel about The Lifeline? I feel it is good – though it could have been so much more. If you like war stories, you’ll enjoy it. If you want to know more about the occupation in a country the British were going to invade until the Germans got there first (a detail Swift, like most Brits, avoids mentioning), this is definitely worth a look. And if you are just looking for an adventure story with a dash of romance, you could do a lot worse. Swift is a fine writer and her prose will definitely keep you turning the pages.

Thank you to Sapere for providing a copy for review.