More from Spain (and Portugal) 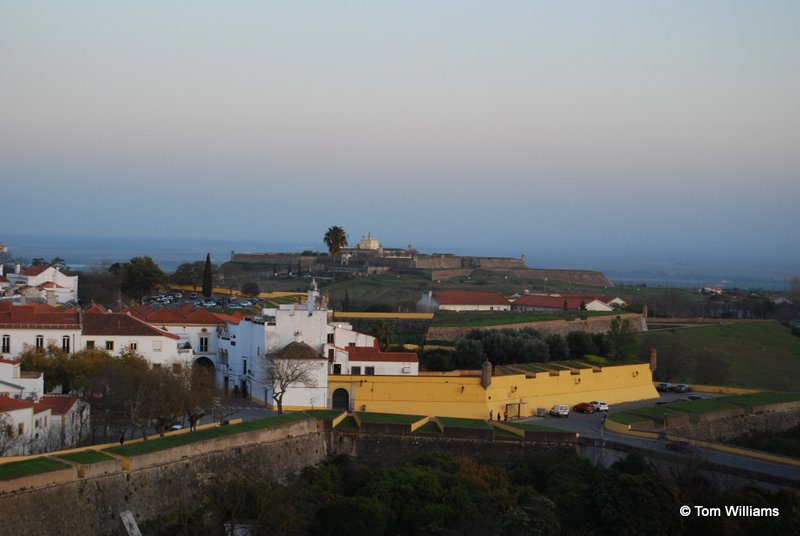 Trujillo is a tiny place so, much as we loved it, it made sense to leave the next morning for Badajoz. (If you missed last week’s post about Trujillo, do have a look at the pictures HERE.)

Badajoz features prominently in the Peninsular Wars, largely (as far as Brits are concerned) because of the siege of 1812. British forces eventually stormed the city, but the main attack through a breach in the city wall was unsuccessful. (The successful attack came through the castle.) Four thousand British and Portuguese troops died in the assault and the reprisals taken against civilians after British troops entered the city were terrible.

I did wonder how you lose 4,000 men in a breach assault and then I saw the wall that was breached. Badajoz: Site of the breach (on the wall away from the camera)

The astonishing thing is that it was breached at all. The walls are very thick with many gun emplacements, although presumably one of the reasons for making the breach here is that, unlike much of wall, this section is not covered by redoubts on either side.

I’m no expert on siege warfare, so I just admired the engineering feat that is the walls of Badajoz, most of which still stand.

From Badajox in Spain, we drove to Elvas in Portugal. It’s a short drive with no geographical features to suggest a natural border and, given that both are in the Schengen area, no sort of border formalities at all, so we were soon checking in to our Portuguese hotel which had been designed by a top Portuguese architect in 1942. Later we were to see photographs of the hotel in the Guggenheim Museum of Contemporary Art in Lisbon but the pride that the staff take in the history of the place is quite obvious.

The hotel is a very short walk from the town so as soon as we had checked in, we were off to enter through the town gate. (Well, one of the town gates – the wall is pretty well intact.) Elvas is not only ridiculously pretty, but also an astonishing work of military defence. Elvas was (and still is) a frontier town, guarding the road from Spain. Built in the 17th century, the walls, with their seven bastions and four semi-bastions, represented the very best in the defence technology of the day. The town was further defended by two separate fortresses which occupied higher ground that could be used as artillery positions outside the town walls. The thickness of the walls is clear in this photo. An interesting detail on the walls is the presence of toilets for use by the guards. There is a castle, but it’s something of a disappointment as it really isn’t a particularly strong defensive position but seems rather a place that people might withdraw to make a desperate last stand in the unlikely event of the walls being breached. You can see Badajoz from Elvas and Wellington was briefly based in Elvas. That’s Badajoz on the horizon

Some officers who died at Badajoz were brought back to Elvas for burial. The British cemetery is just below the castle walls and well worth a visit. Oh, yes, there’s an aqueduct too. Started in 1529, the aqueduct was plagued with construction problems and not finished for almost 100 years. It’s an impressive piece of work, though.

We did have an amazing trip (yes, there is more to come), visiting fantastic places and staying in beautiful hotels. We couldn’t ever have organised it ourselves. Our itinerary was planned by Robert Pocock, who was planning to join us to check out some of places on his next tour for Campaigns and Culture. Unfortunately he had to postpone his trip, but thanks to his instructions we saw most of the things he had planned. He is now busy planning future tours to the Peninsula with the possibility of bespoke tours before that if you want to hire his services privately. You can find details of his business at www.campaignsandculture.com.

More serious history in next week’s post as we discuss Wellington’s defensive fortifications that made up the Lines of Torres Vedras. You still have to look at my holiday photographs though.