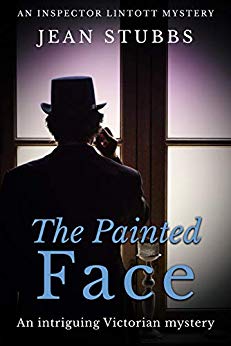 At the end of last year I reviewed ‘Dear Laura’ by Jean Stubbs. It was presented as a detective story, but I said in my review that I felt that it was more of a psychological thriller, so when the publisher (Sapere) offered me a sequel featuring the same detective I was intrigued as to what sort of a book I would be reading.

‘The Painted Face’ is, again, more an exploration of the mind of one of the protagonists than it is a conventional detective story.

Carradine is an artist: a man gifted with great technical skill, but unable to express himself as he would wish. In both his painting and his personal life he is unable to give vent to any real feelings. His emotions are trapped as the child he was when the step-sister he adored was killed in a train crash and his stepmother (Gabrielle), for whom his feelings were practically oedipal, subsequently died of grief.

He decides that the only way he can move on is to understand the mystery of his sister’s death. The circumstances had never been properly explained. Why was the child, whose mother was devoted to her, travelling apparently alone on a train from France to Switzerland? Why was the mother’s maid summarily dismissed soon after?

Inspector Lintott (from the previous story) has retired, but Carradine hires him to dig up the past. They travel together to Paris, where Gabrielle’s family had lived and where she spent much of her time with them. It was from there that Odette, the sister, had set off on her fatal journey.

The dedication of the book mentions Paris and the city is clearly a character in the book. It’s 1902 and Paris is at the height of its fin-de-siècle splendour (as Carradine would see it) or degeneracy (as Lintott definitely suspects, at least initially). The book is a celebration of the honest enjoyment of good food, good company, and good sex which Stubbs ascribes to the Paris of the period. She does the food and the company rather well and the sex, where discreetly touched upon, is nicely sketched too, but there is a gaping hole where Paris ought to be. There are no smells (though the sewers then were presumably even more odiferous than they often are now); there is little sense of the noise of a busy city full of cobbled avenues. We do not gaze through the windows of the shops of the Champs-Élysées and, although there are often descriptions of individuals encountered on the streets, we get no sense of the hustle and bustle, the colours or the swirl of movement.

In ‘Dear Laura’ Stubbs showed herself mistress of the domestic. Almost all the story takes place in one house and the mild claustrophobia of the setting adds to its strength. The best bits of ‘The Painted Face’ are also those which take place in quite intimate settings: the painter’s studio; a mistress’s boudoir; even the attic of Carradine’s home. The attempts to paint on a broader canvas – a journey across a peculiarly anonymous France; the walks around Paris – these simply distract from a story that is really about Carradine and his attempts to come to terms with his demons.

In the end Lintott solves the mystery and Carradine does find closure. It’s not really a detective story at all – most of the mystery is solved when he reads Gabrielle’s diaries which Carradine, despite going to the trouble of hiring a detective, has never thought to read himself. And the story is finished neatly by a series of improbable coincidences which would have embarrassed Dickens – surely the father of improbable literary coincidences. The final twist, too, is rather pat and predictable, but it does provide a satisfying ending.

This is a well-written story with some nice characterisation. Not only the tormented artist and the apparently stolidly conventional detective are well-drawn but so are the minor characters: the garrulous old lady who provides a vital clue tucked away in her apparently unending reminiscences; the restaurant owner who helps Lintott negotiate his way through a menu he cannot read; the servant with an active fantasy life who, in the real world, is constantly falling pregnant.

There is much to enjoy, but, taken as a whole, I felt it didn’t quite work. That may be just me: in any case, the time spent reading was not wasted and you may well enjoy it more than I did.