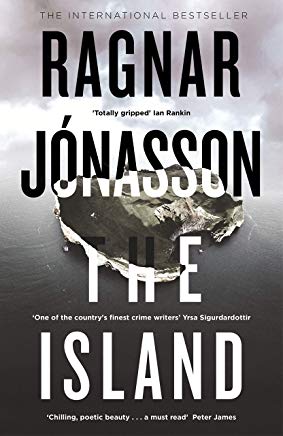 Exactly a year ago I reviewed The Darkness by Ragner Jonasson. The publishers have very kindly sent me a copy of his next book, The Island, which will be published next week.

The main character is Hulda Gunnarson, who [SPOILER IF YOU HAVEN’T READ THE DARKNESS] died in the first book. It’s a bit disconcerting and it took me a while to appreciate that I was reading a prequel. I appreciated the chance to learn more about Hulda, though, as I had found her a fascinating character in The Darkness.

In many ways The Island is more a story about Hulda than it is a detective story. The ‘whodunnit’ element is quite thin, though it does hold together as a mystery and the characters are interesting enough to make the read feel worthwhile. It’s the little details of characterisation that I love about Jonasson’s writing. Here he is writing about a couple who are such minor characters that they never appear in the story again, but this catches exactly the mood of so many people who are just beginning to realise that their youth is behind them.

In the end, they set off home a little earlier than planned, just after eleven. The three-course dinner was over by then, and, to be honest, it had been a bit underwhelming. The main course, which was lamb, had been bland at best and, after dinner, people had piled on to the crowded dance floor. To begin with, the DJ had played popular oldies, but then he moved on to more recent chart hits, which weren’t really the couple’s sort of thing, although they still liked to think of themselves as young. After all, they weren’t middle-aged yet.

The eye for character and telling details of daily life is a joy, but it can get in the way of the story, making for a somewhat “bitty” narrative. A trip Hulda makes to the USA in an attempt to track down her father, in particular, is completely detached from the rest of the story. It’s almost as if Jonasson really wants to write a literary novel about contemporary life in Iceland but has been forced by commercial pressure to write a detective story. The result is almost two separate books that don’t quite make a cohesive whole.

The Island is more mainstream than the full-on Scandi-noir of The Darkness. It centres on the investigation of a single murder in the Icelandic version of a classic country house mystery: four people spend a weekend on an isolated island and one is killed. The murderer has to be one of the remaining three. After the Grand Guignol of The Darkness I was amused by the constant reassurance that murder is extremely unusual in Iceland. Perhaps after The Darkness increased Iceland’s murder rate by several hundred percent the Reykjavik tourist board pressured Jonasson to ease off this time.

Flawed as it is, I enjoyed reading The Island. Jonasson has an easy style that kept me up late reading on and I enjoyed learning more about Hulda. It isn’t one for hard-core fans of detective fiction, but it’s definitely worth a look if you want character-driven stories in unfamiliar settings.