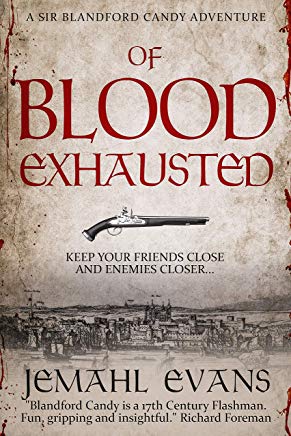 After the double-crosses and triple crosses and general chaos of the second of Jemahl Evans’ Blandford Candy books, Of Blood Exhausted is a relief. Even I could follow (most of) the plot. Evil foreigners are planning to assassinate Karl Ludwig, the Elector Palatine, who is visiting London in the hope (not totally absurd) that he might be offered the throne if Charles is deposed. His death, Evans tells us in an impressively succinct summary, “could drive a wedge between the Protestant states, and perhaps even tip the Dutch provinces into active war against the English Parliament.” Candy’s mission is to protect the Elector.

A French agent is also on a mission to protect Karl Ludwig, for reasons that are explained somewhat less succinctly. You can hardly blame Evans for that – it’s related to a whole series of alliances in Europe and he does well to explain it all. It is, though, an example of one of the many instances where Evans the writer loses out to Evans the historian, which is a shame, because Evans the writer can tell a very good tale. Anyway, the history lesson out of the way, we can concentrate on the fact that the Frenchman is d’Artagnan. Yes, that d’Artagnan. It turns out that the d’Artagnan of The Three Musketeers was a real person and that he did indeed spend time in England during the Civil War, though his adventures here are wholly fictional.

D’Artagnan is very French and witty. Sadly his wit suffers from the fact that Evans insists on translating every single word he says. Evans is a huge fan of footnotes (there are 76 in this book) but the one time footnotes would be more than justified he insists on putting everything in parentheses in the text. Even with this handicap, d’Artagnan is still much more witty than poor Blandford Candy who is regularly and amusingly shown up, but the two of them work together to track down the assassin who is duly killed. The Elector’s life is saved, d’Artagnan returns to France and Blandford Candy can go back to womanising without the Frenchman’s insufferable competition.

This relatively straightforward plot allows for an enormous amount of detail about the Civil War – the battles, and the politics that underlay them. Evans knows his period and makes as much sense of the history as anybody else I’ve read. The Civil War was messy and complicated and the Blandford Candy books are as good a way to get to know it as any. There’s an enormous amount of detail of daily life, lovingly researched (see those 76 footnotes) and brought vividly to life. It’s not as easy to read as, say, Deborah Swift, but then her adventures in Restoration England are painted on a much smaller canvas. She even presents Pepys as husband and man-about-town first and as an important civil servant at the Admiralty second. Evans is dealing with high policy, his book peopled with key political figures of the period who spend much of their time talking about the big policy issues of the day.

By the end of the story, the war is over. Charles is still alive, but his armies no longer threaten Parliament. That would mark a natural finish to the book, but Evans obviously has more plans for Blandford Candy who is about to build a new life for himself in America. Sadly his adventures between the natural end of the book and finally boarding the ship that will cross the Atlantic reminded me of the coda to Lord of the Rings as we wait what seems like forever for that ship to arrive and our hero to finally embark for the west. It’s a shame, because the last impressions the book leaves you with are in no way a fair reflection of the excellent quality of the rest of it.