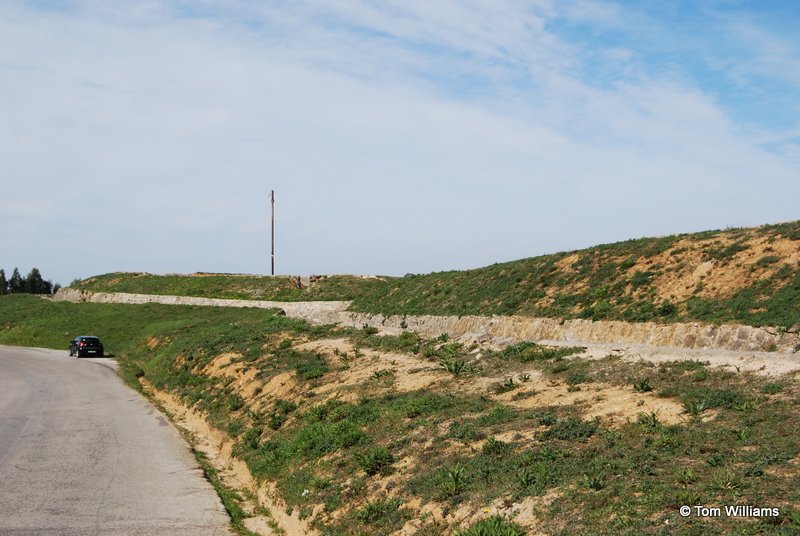 After exploring the Great Redoubt and a quick walk around Torres Vedras castle in the evening, we set off the next day to see Fort San Vicente. This fort was the strongest of all the forts of the Lines and has been heavily, but sympathetically, restored with stonework secured by concrete. A small museum has been built in the hermitage that stood on the site before the fort was constructed and which remained while it was a military fortification (though without a hermit).

Fort San Vicente is made up of three separate redoubts connected to form a single fort. You can see the three redoubts and the large central area in this aerial photo. The place is huge. Besides the hermitage it contains three windmills used, yet again, as munitions stores. There was also another semaphore in the chain that ran the whole length of the lines. Two of the (restored) windmills that were used as ammunition bunkers

There was no way that I could capture the size of the place in a single photograph, so I videoed it as I walked around. The video runs 13 minutes! If you’d like to watch it, it’s here.

It’s not a professional production. There’s a lot of wind noise and the focus slips at one point (don’t worry, it comes back) but you do get to see the whole fort, together with my commentary for what it’s worth. If you’re interested in this sort of thing, it’s probably worth looking at.

Fort San Vicente positively bristled with artillery. This is just part of one of the redoubts. The semaphore mast was in the same redoubt. The British used a ball semaphore, adapted from the one used by the Navy. They had seamen in the forts to operate them until, in a move that seems very 21st century, the Navy withdrew its men on the grounds that Wellington refused to pay for them from Army funds. They were then replaced with Portuguese veterans from the Corpo Telegraphico, who were trained to operate the British system.

The horizontal arms on the mast standing there today are not really long enough. When this was rigged up and working the arm would have stretched out as far as the five posts at the bottom. Ropes would have run from the arm to each of the five posts and balls mounted on these ropes would have carried the message. A model in the museum at the fort shows how it would have been set up. The shorter arms on the modern reproduction are probably wise. There were problems with the original masts which could not bear the weight of the arms and which had to be replaced.

The system allows the masts to transmit one number at a time from one to 999. Each number corresponded to a word in a codebook enabling vital military messages to be transmitted very quickly. Anybody could see the signals but without the codebook they were meaningless.

Restoration in this fort means that the firestep is clearly visible. Here Tammy (probably not that much shorter than a typical infantryman of the time) demonstrates its use. There are no gun emplacements on this stretch of wall as it faces into the rest of the fort. If troops are fighting here, the enemy has already breached the centre of the fort and will be at very close range. The presence of the firestep and the gated entrance (part of which you can see in the foreground) reflects the fact that each of the redoubts was viewed as a separate fortification with its own garrison. In total there were 2,200 troops – mainly Portuguese – garrisoning the three redoubts. Note that there was no barracks accommodation here. Most of the men probably slept on the ground with only their greatcoats for protection from the weather.

As at the Great Redoubt there were other, smaller, forts that protected the flanks of Fort San Vicente. We visited one nearby, Olheiros Fort. This was a pretty basic affair with a garrison of only 180 men. Again, it was built around a windmill, but here it was simply a more or less rectangular shape with a mere seven cannon. The stone faced ditch, though restored, seems to have held up pretty well. Its main claim to fame is that it is the most northerly of the Torres Vedras forts. That’s all we had time for for the Lines of Torres Vedras. If you’d like to see more, do have a look at the video where I talk about some of the details as well.

When we left Olheiros Fort we headed for Lisbon, which I will be writing about later. Next week, though, as a break from the Peninsular War we’ll have a guest post from Penny Hampson who will be writing about Regency fiction, comparing more modern authors with the mother of them all: Jane Austen.

I’d like to thank Robert Pocock of Campaigns and Culture for his help in planning the trip.

The photograph of the model of the semaphore in use was taken by Roundtheworld and is licensed under Creative Commons Attribution-Share Alike 4.0 International.

The aerial photograph of the fort is from Google Maps.