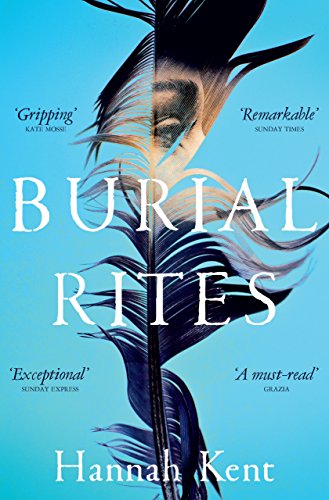 It’s Iceland in 1828 and Agnes Megnusdottir has been sentenced to death for murder. At the time, Iceland was ruled by Denmark, so the sentence has to be confirmed by the King in Copenhagen. As there is no prison in Iceland it is decided that, while she waits for the King’s word, Agnes should live in one of the isolated farms in the north of the island, working as a servant for the family there.

This is the background to Hannah Kent’s extraordinary novel, Burial Rites.

Nothing much happens. Agnes turns out not to be the monster people expected. She discovers that some people treat her with unexpected kindness while others don’t. The long winter turns to summer and then the days get shorter again.

As Agnes learns to trust other people around her, we learn more of the murder and how Agnes got caught up with it, but while the people she is living alongside grow increasingly sympathetic, the machinery of justice grinds on. An axe is bought and there is a bureaucratic exchange of notes between Iceland and Copenhagen as to who should pay for it. Legal processes are completed. The execution day arrives.

That’s all. That such a slight storyline becomes such a gripping read is down to the smoothness of Hannah Kent’s writing, her ability to draw us into the characters so that we not only know them but care about them too, and the detail of everyday life on an Icelandic smallholding 200 years ago.

When I was reading, I found myself wondering how much of the story was true. It was only when I had finished that I read the acknowledgements and discovered just how much research had gone into it. The basic story, it turns out, is quite possibly true, although to this day there are differing views as to Agnes’s culpability. More importantly, Kent has done an enormous amount of research into life in this remote place so long ago. Historical novelists are always caught between the danger of not providing a textured background on the one hand and of overwhelming their readers with irrelevant detail on the other. Authors are always told that they should research in depth but wear that knowledge lightly when they write. Kent is a rare and splendid example of somebody who gets it just right. When I was reading I felt that the historical details didn’t matter. Kent painted a picture of people living a harsh life, in almost constant darkness for several months of the year, in farms so isolated that you could die just walking to a neighbour. The images are so vivid that you see that harsh landscape on the shores of a grey sea that might as well be the edge of the world. It was only when I finished that I realised that the tiny details – the herbs they used, the way they slaughtered the sheep, the fuel they burned (dried dung for heat, peat to bank the fire at night) – were what made the whole thing so real. And because we see the scene so clearly, so we come to understand the people shaped by this harsh landscape and we come to understand something of their hopes and fears and, to an extent to share them.

This is an astonishing book. Do read it.