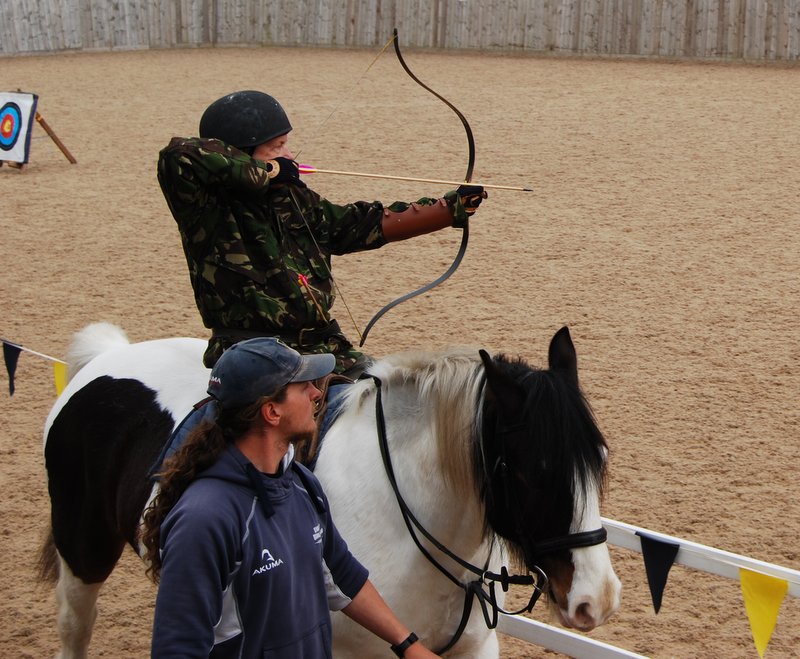 At Christmas my son made me a present of a lesson in horse archery and a couple of weeks ago I took myself up to Guy’s Cliffe, which seemed an appropriately ancient parish (occupied since Saxon times) to learn an ancient skill. It’s the home of the Knights of Middle England, who we’d seen displaying their considerable talents at Warwick Castle a couple of years ago and who, for a consideration, will do their best to teach the rest of us some of how it is done. The Knights of Middle England in action

I hadn’t expected it to be that exciting. In the past I used to take archery reasonably seriously and (as readers of my old blog will know) I am fairly comfortable sitting on a horse provided I am not asked to do anything adventurous. How difficult could shooting from horseback be?

The answer turns out to be very difficult. I was told that any experience I had either of conventional archery or even of riding was more likely to get in the way than not and I was soon to learn that this was completely true.

In the course of being cruelly exposed to my limitations both as an archer and a horseman, I was given a quick lesson in the history of horse archery which raised some interesting points about archery in general.

The British, and Western Europeans in the main, have never been big on horse archery. The famous archers of Olde England used longbows and fought on foot. The longbows used at Agincourt would have been anything up to 6 feet long and it would have been completely impossible to fire them on horseback.

To fire a bow with any accuracy at all while riding at speed requires two technical elements: a short bow and stirrups. Short recursive bows are more common in Eastern Europe and Asia (the bow I was to use was made in Korea) and stirrups are also thought to have been invented in Asia, making their way to Europe with Genghis Khan’s infamous horde. Me with a recursive bow.

The result is that horse archery is mainly practised, even today, in the Far East and in those parts of Eastern Europe where Ghengis introduced the idea.

Not only is the bow different, but the way that you shoot is different too. A modern target archer (and almost all the archers you see in films) puts the arrow on the left of the bow, and draws back with his fingers. In horse archery, the arrow is placed on the right of the bow and drawn back with the ball of the thumb. (For the purpose of this discussion, all my archers are right-handed.)

The reason for this is that if you are drawing right handed, you will have to fire on a target to the left of the horse. You can see what I mean in this photo of me trying it out on a very patient (and stationery) mount . As you are holding the bow with your left hand, you have to load with your right hand fiddling about trying to get the arrow across your body onto the left hand side of the bow just takes too long. Once the horse is moving, speed becomes essential. It’s a completely different situation from in target archery where you can generally take as long as you want. After years of being drilled to load on the left, the logic of this didn’t stop me continually trying to do things the wrong way round, resulting in a lot of targets disappearing behind me as the horse blithely trotted on to the next one.

The thumb draw, too, is an entirely sensible response to the practical realities of shooting on horseback. As everything is being shaken about, you need your finger free to stop the arrow jumping clear of the string. Drawing with the ball of your thumb leaves your index finger in a position where it can hold the end of the arrow lightly against the thumb until the moment when it is released.

Interestingly, some people have suggested that until modern times all archers loaded from the right. It does allow loading to be done very quickly. (If you want to look into this, I really recommend you watch some of Lars Andersen’s videos. Other views are also available. Historians differ: that’s what historians do.)

After a few shots from a stationery horse, it was time to try again, but with the horse moving. Each of us had someone holding a leading rein and the horses walked obediently down a marked off corridor that they were obviously used to, but the whole exercise was still quite interesting bearing in mind that if you are holding a bow in one hand and a bowstring in the other, that doesn’t leave anything to hold the reins.

The horses are very good at responding to pressure from your legs to get them started and then, as soon as you have finished shooting, you have one hand to steer with. The horses are all trained to respond to the pressure of reins on the neck – the way you traditionally ride Western style. It means you can steer one-handed. It was another skill to master though. (You’d have thought I’d have mastered it riding in South America, but I was terrible at it there too: old habits are hard to break.)

At a walk, the business of shooting wasn’t that tricky. You took one shot at an angle as you approached the target and another with your body twisted hard to the left as you passed it. By the time we were up to a trot, though, the targets seemed to come up nightmarishly fast. Actually we had several seconds, but in that time you have to take the arrow from your belt (people with riding boots tucked them against their calves), fit it to the string (or ‘knock on’), draw, aim and fire. With practice, that should become a single fluid movement, but not less than two hours after first being introduced to the whole idea. “Just try to get all your arrows off,” I was told. With time at a premium, the thing to sacrifice was, apparently, aiming. It was explained that in war the horsemen would ride close to their target at a gallop, firing as many shots as possible as they passed. Ideally they would circle round, firing the rest of the arrows that they had, rejoining their main force where they would be handed more arrows to repeat the process. Note that the arrows would not be in a quiver where they would simply be thrown out by the motion of the horse. Any quiver placed so that arrows can be quickly pulled out and loaded means that they will also quickly be tossed out onto the ground. In fact, is likely that the whole idea of the back quiver (as featured in almost every Robin Hood movie) is entirely a Hollywood invention.

After two hours I could loose off four arrows as my horse trotted very slowly past two targets and at least some of them hit home. If it had been a packed mass of enemy troops then (provided I stayed well out of spear range) I might even have taken a couple of them down. It’s unlikely, though, that Ghengis Khan is going to recruit me any time soon.

Sadly, there are very few places you can practise horse archery in England. (One of my fellow-students, who takes it moderately seriously, had driven up to Warwick from Winchester.) It’s also terrifyingly expensive. (The horses are trained way beyond your average hack and there is one-to-one supervision as you shoot which, given that you really can kill somebody with the kit, is a sensible precaution.) It seems unlikely that I’m going to take it up. If, though, you all buy my books (probably, to be honest, several times – they make excellent gifts) I may well be travelling to Warwick again. Then, in some improbably dystopian future, I might be a useful person to have around.