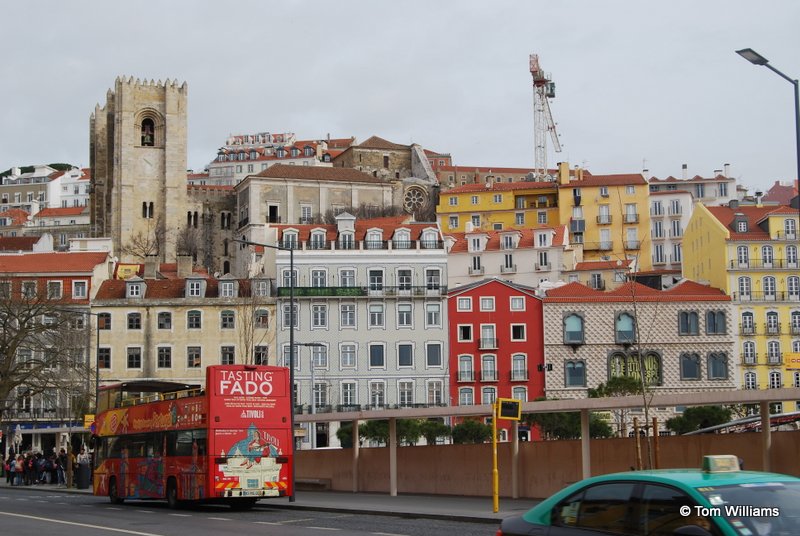 We’re back to my Iberian expedition today. (Almost finished, honest.) By now we are at Lisbon.

Lisbon is a small city but it’s been around for a long time and there are remains from the Romans through the Moors to beautiful medieval buildings. Much of it was destroyed by an earthquake and tidal wave in 1755, so there are grand squares and avenues that date from the late 18th century – an excellent time to be rebuilding.

My main interest was in the Military Museum which features a lot of weaponry from the Napoleonic era and I’ll be writing about that in a later blog, but I’m starting with something much older just because I found it fascinating and I hope you do too.

On our first day in Lisbon we headed up to the castle, pausing only to look at the remains of a huge Roman theatre built into the hillside so as to take advantage of the incline for the auditorium. There’s not a lot of it left, so we had to use our imagination a lot, but chunks of drainage channels, passageways, and seating gave an impressive idea of the scale that it must have been built on.

The castle looks great from a distance but close up it is a bit of a disappointment. The Portuguese dictatorship used to be more enthusiastic about the idea of Portugal’s proud past than the historic detail of it and the “restoration” work at the castle has definite elements of Disneyfication. The archaeological work being carried out to see what was there before the medieval castle is much more interesting. There’s a bit of Roman stuff that’s pretty meaningless except to a professional eye, but there are there clear traces of a couple of Moorish houses which are fascinating. The buildings had small bedrooms leading off the main sitting room and in one the remains of an internal dividing wall are still clearly visible. There is even a little bit of the decorative frieze from the sitting room where you can see the same paint has been applied in a very different pattern. These buildings date from the eighth century and seeing the remains was a little bit special.

The small child in me was particularly impressed with this. It’s an eighth century toilet – unusual because it is connected via the sloping drain on the right of the picture to a drain in the street outside. You can even see traces of the original tiled floor.

It wasn’t what we had expected to find in Lisbon castle but I was fascinated to get this glimpse into everyday life almost 1,500 years ago. I hope you have enjoyed reading about it too.

We spent the rest of the day exploring a lot more of Lisbon, but I’m not going to make you jealous with our descriptions of the food or the beauty of the place. I will leave you though, with a picture from our evening. Yes, almost everywhere we go we take our tango shoes and we can usually find somewhere to dance. Lisbon was no exception.

Next week: the military museum and more cannon than you can shake a bayonet at.