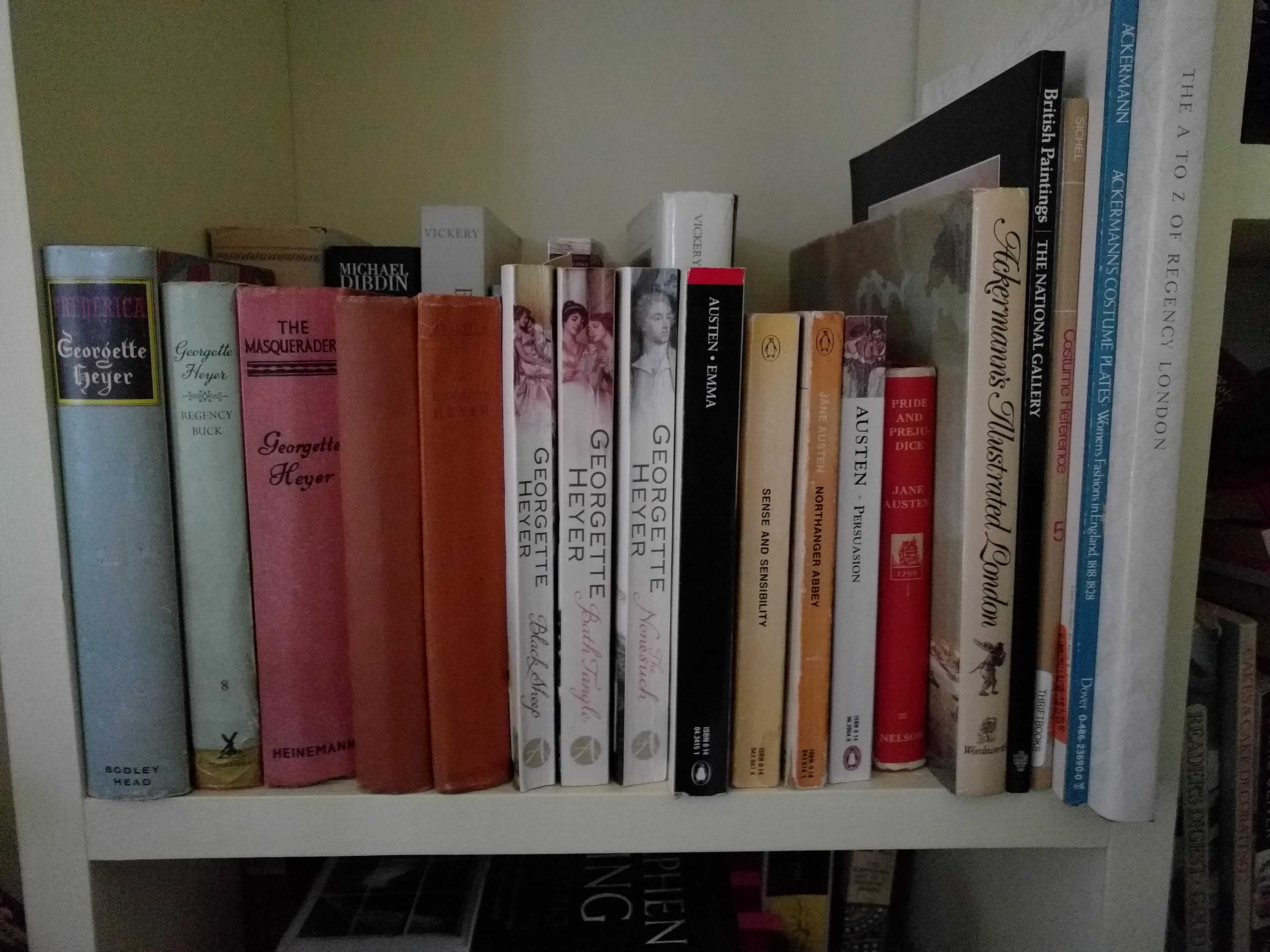 It is said that Jane Austen casts a long shadow. Some commentators suggest that any works of fiction set in the Regency period and containing an element of romance are inevitably in Austen’s shade.

First, I will come clean and say that I love a well-written Regency novel — I’ve even written a couple of my own. But when I’m reading one of these, I am not comparing them to Austen. Rather, I’m weighing them on their own merits, and asking myself whether the writing makes me feel I am reading about the past. Providing the author has not included jarring anachronisms, such as wolves running wild in 18th century England (I’ve seen that), or similar, and the writing is good, then I’m happy.

Yes, Austen is acknowledged as the foremost exponent of the Regency novel, but, let’s not forget, what she was writing was, for her, contemporary. Everything she wrote about happened at the time she put pen to paper. Her readers thought her work fresh and reflective of the period in which they were living — one of the reasons, no doubt, that her novels were successful at the time. As the years passed of course, other reasons for regarding her work as the epitome of perfection came to the fore: the elegance of her prose, her sharp observations, her ability to create memorable characters.

Importantly too, Austen would not have considered her works to be romances, certainly not in the way we understand the word today. Her books were about relationships and feelings, it is true, but they weren’t concerned exclusively with romantic love. She explored not only the relationships between men and women, but also the links between husband and wife (Mr and Mrs Bennett, Admiral and Mrs Croft), sisters (Elizabeth and Jane, Elinor and Marianne), and the social hierarchies of the society in which she lived. Her writing subtly conveys the realities of life in the 1800s  in a way which would have been easily understood by her contemporaries, but which requires a lot more work for modern readers.

In my opinion, anyone writing a Regency novel today cannot hope to compete with Austen, mainly because it is not a level playing field and I’m not even sure they are in the same game. A modern writer may have all the prose skills to convey the characters, the witticisms, the engaging plot lines… but what they do not have is the innate knowledge that Austen had about the time in which she lived.

I believe that a contemporary writer can undertake any amount of research to understand and add detail to their historical novel, but the result will always be their interpretation of life in the past, not an accurate recreation. I’m not saying this is a bad thing by any means. I believe it is important that a reader or writer who wants to understand a particular period or subject should read and research as much as possible, and build up their own picture.

To go off the point a little, this is pretty much how historians work. They do not examine one account of a person or event, but as many as they can get their hands on. They consider all the primary sources. They also research other historians’ interpretations, with which they may agree or disagree, before coming to their own conclusions. A perfect example of this is the biography. Two biographers may have access to the same primary sources and documents, but it is rare for them to paint exactly the same picture of their subject.

Think how many books there are about Henry VIII or Elizabeth I, and how many different interpretations there are of their respective characters. Henry was either a ruthless despot, determined to get himself an heir, regardless of the cost to the people around him, or he was a deeply religious man who believed the birth of his daughters was a judgement on him for marrying his brother’s widow and then casting her off for another. Elizabeth was a wily, intelligent woman who managed in a man’s world or she was a vain, manipulative egotist. All are valid conclusions.

You may be surprised to know that I do not consider Austen to have ever written a ‘Regency’ novel; she wrote novels set in the Regency because that was when she lived. For me, the originator of Regency novels as we know them, is Georgette Heyer (1902-1974) — a writer I discovered many years ago in my early teens, and some years before I was ‘forced’ to study Austen. At the time, I would never have thought to put the two in the same category, even though their works were set in the same time period. No, for me, every modern Regency novel should be compared to Heyer, and sad to say, not all come up to scratch. Georgette Heyer was the only daughter of George and Silvia; she was born in Wimbledon and had two younger brothers, George Boris and Frank Dmitri. Her writing career started at the age of nineteen when she published The Black Moth, a story begun several years earlier to amuse her brother George during his convalescence from a recurring bout of illness (he suffered from  haemophilia). Her oeuvre, consisting of fifty-seven titles, spanned fifty years and were best-sellers. Not bad for a writer who shunned publicity, so much so that her real name was a secret kept from her fans until after her death — one thing that she had in common with Jane Austen, whose own readers were not apprised of her name until Persuasion and Northanger Abbey were published posthumously in 1817 by her brother Henry Austen.

Heyer was meticulous in her research — her depiction of the battle of Waterloo in An Infamous Army, was required reading for officers at Sandhurst, according to her biographer, Jane Aiken Hodge. However, Hodge also points out that Heyer’s Regency world is a carefully selected, highly artificial one. With a few exceptions, Heyer, like Austen, does not often mention the poverty, the civil unrest, and the pervading air of paranoia about possible revolution, that existed at the time.

Also like Austen, Heyer’s works are written in elegant prose, witty, with memorable characters… but they are not the same. Heyer was recreating a world she had no firsthand knowledge of, while Austen was writing what she knew and lived.

To come back to my original point, I do not believe that today’s writers of Regency novels should worry about emulating Austen; they are not under her shadow. Do authors of biting social satires worry about comparisons with Dickens? I think not. They say that comparisons are odious, in this case I have to agree. Modern writers of Regency novels should not be compared to Austen. It is unnecessary and unfair. Austen is most definitely in a category of her own. Having worked in various sectors before becoming a full time mum, Penny Hampson decided to follow her passion for history by studying with the Open University. She graduated with honours and went on to complete a post-graduate degree.

Penny then landed her dream role, working in an environment where she was surrounded by rare books and historical manuscripts. Flash forward nineteen years, and the opportunity came along to indulge her other main passion – writing historical fiction. Encouraged by friends and family, three years later Penny published her debut novel A Gentleman’s Promise.

Her second novel, An Officer’s Vow, has just been released.

Penny lives with her family in Oxfordshire, and when she is not writing, she enjoys reading, walking, swimming, and the odd gin and tonic (not all at the same time). The future looks bleak to Major Nate Crawford. Depressed after being sent home from the Peninsular Campaign as unfit for service, he contemplates ending it all. Then an unexpected opportunity for adventure beckons in the shape of a delightfully intriguing runaway heiress. He will prove his worth as an officer and a gentleman by offering his help. He has a plan…

Lottie Benham is desperate. Her life is in danger and she needs a place of safety until her next birthday. The unexpected proposal from this attractive, but intimidating officer could be the answer to her prayers. Not normally a risk-taker, she decides to gamble all by placing her trust in this charismatic gentleman, who she suspects might be more in need of help than she.

But the best laid plans…

Caught up in conflict, danger, and deception, will Lottie and Nate survive to find the perfect solution to their problems?

An Officer’s Vow is the second in Penny Hampson’s Regency-set Gentlemen series, following the exploits and misadventures of a loosely linked group of friends.