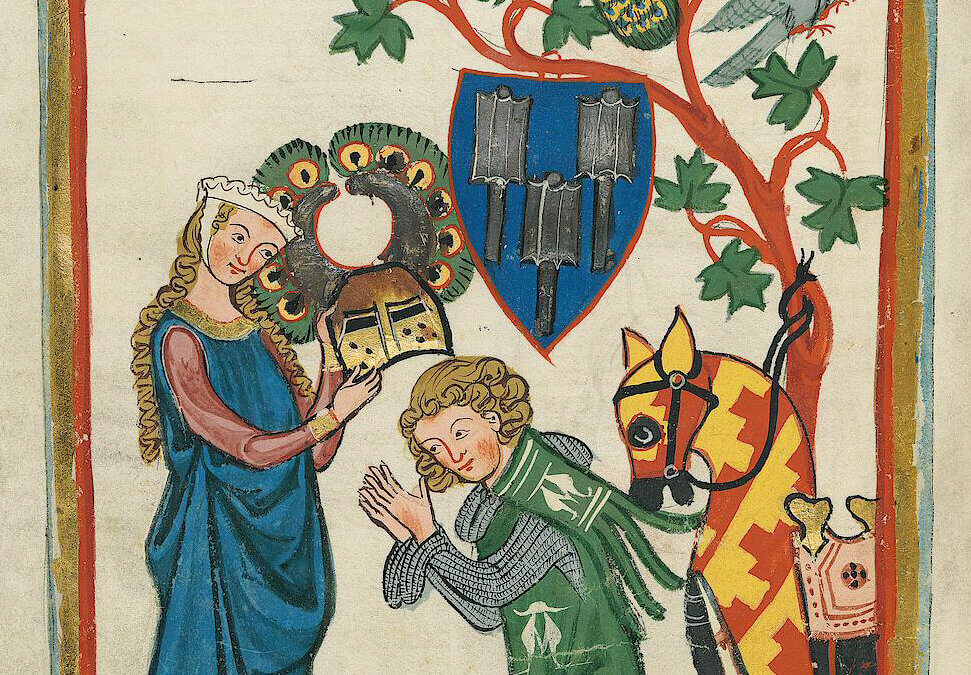 A guest post this week from Carol McGrath whose latest novel, The Stone Rose, is published on 21 April.

Isabella of France, the protagonist of my new novel, The Stone Rose, left her homeland in 1308 on 7th February, aged twelve. She had married Edward II of England in Boulogne in January. Edward was twenty-three and certainly, despite a reputation given him by later Historians, was not adverse to women. He already had fathered a boy named Adam by a woman unknown to History. It has been thought, too, that later he had a sexual relationship with his eldest niece, Eleanor de Clare. This was suggested as possible by Historian, Kathryn Warner. Edward and Isabella did have a successful partnership for many years despite the fact Edward was predominantly a lover of men and probably bisexual.

Piers Gaveston, the third party in this love triangle, was a nobleman from South Western France, Gascony. In 1307 he was married to one of the King’s other nieces, Eleanor’s sister, Margaret. There are three Clare girls in this story. Edward had known Piers at least since he was sixteen and he was infatuated with the dashing Gaveston. Edward’s and Isabella’s marriage was a political match designed to consolidate peace between France and England and it never mattered what the personal desires of Edward and Isabella were. Edward scandalised his kingdom and his barons were furious when he appointed his best friend whom he called his ‘brother’ and who was possibly his lover as regent of England during his absence abroad. Edward’s first cousin, Thomas, Earl of Lancaster, for instance, would have been more appropriate.

Edward might have been enchanted by the exceedingly pretty, educated Isabella who was exceptionally well-connected but for some years after their marriage he paid her little attention. She was, after all, very young and he was eccentric. He enjoyed the company of carpenters, blacksmiths and fishermen. He liked to thatch and dig ditches. His other hobbies were swimming and rowing. Isabella must have found these rather odd pursuits for a king. This was the medieval era after all. Equally, Edward was cultured and loved books, music and poetry as did Isabella. Writing this part of the book, I felt the Piers’, Edward’s and Isabella’s relationship was that of a young court, often extravagant and at odds with their elders. They were, within the pages of my novel, behaving as a charmed circle.  We do not actually know how Isabella really saw Piers Gaveston and the royal marriage may have been initially consummated once to make it legal and binding. Given Isabella’s youth it was unlikely they had much of a sex life. Most girls of the nobility did not produce children before they were sixteen. Yet, Edward and Isabella would have passed time in each other’s company hunting, feasting and during Christmas and Easter courts.

Isabella arrived in England into a swirling maelstrom of conflict between her husband, who was utterly infatuated with Piers, and his barons. This created a crisis that threatened to bring the country to the brink of civil war. Amongst those waiting for the royal wedding in Dover that February, amongst the great lords and ladies, was of course Piers. Edward had eyes for none other. Piers has been described by various contemporary chroniclers. He is said to have been ‘graceful and agile in body, sharp-witted, refined in manners and sufficiently well-versed in military matters.’ Others said he was ‘haughty and supercilious’ but also ‘very magnificent, liberal and well-bred.’ He was a man of ‘big ideas’ and he was ‘haughty and puffed up.’ Edward adored him and this clearly went to Piers’ head. Poor Isabella! When Edward arrived in Dover he hugged and kissed his friend but this was a tactile age when kissing was common as a greeting amongst men.

The real trouble was Edward ignored the other barons. It is assumed Isabella hated Gaveston but there is no actual evidence she did. Much later, Isabella did loath Hugh Despenser but this was a very different situation. Piers never threatened Isabella or her queenship. Nor was she ever insulted by him. However, Gaveston did poke fun at the nobility. It is hard to get a sense of Isabella’s personality in the early years of her marriage. She was young for politics and too young to begin a family. We have no glimpse of her correspondence from these years either. Edward was generous to Isabella without doubt and there is no evidence of neglect. Piers was prominent at her coronation. It was extravagant and it was written in the chronicles that at the banquet following the coronation Edward payed more attention to Piers than to Isabella.

After the coronation almost all the English barons led by the Earl of Lincoln demanded Piers’ exile. Gaveston was banished but recalled after the Earl of Lincoln’s death. Edward made Piers Earl of Cornwall. The difficult situation continued with further banishments and further threats of civil war over Gaveston’s influence on Edward, until in 1312 Piers was captured by his enemies and taken from his castle of Scarborough to Wallingford. Edward thought the Earl of Pembroke would ensure his friend’s safety on this journey south and Parliament would make a decision about his future, probably exile again. Yet, when he reached Deddington, he was kidnapped by Guy Beauchamp, Earl of Warwick, an enemy Piers had frequently mocked as the Black Dog of Arden. Piers was thrown into a dungeon at Warwick Castle, given a ridiculous trial and told he was to die. He was run though by a sword and beheaded on Blacklow Hill on the road to Kennilworth, his body left there to  be discovered later by travelling clerics.

Isabella was four months pregnant at this time and in the North with Edward. The royal couple heard the news near Hull. Edward never ever forgave Piers’ murder but how Isabella reacted cannot be known. She most likely did her best to comfort Edward.

I found it fascinating to translate these events into a novel, to play with their emotions, second guess these and create living, breathing historical persons and portray all three, Edward, Isabella and Piers fairly. Read The Stone Rose to find out how I wrote this first part of Isabella’s queenship, a love triangle, as a work of fiction which I hope has integrity.

About the Carol McGrath

Carol McGrath is the author of the acclaimed She-Wolves Trilogy, which began with the hugely successful The Silken Rose and continues with the brand new The Damask Rose. Born in Northern Ireland, she fell in love with historical fiction at a young age, when exploring local castles, such as Carrickfergus, and nearby archaeological digs – and discovering some ancient bones herself. While completing a degree in history, she became fascinated by the strong women who were silenced in record, and was inspired to start exploring their lives. Her first novel, The Handfasted Wife, was shortlisted for the Romantic Novelists’ Association Awards, and Mistress Cromwell was widely praised as a timely feminist retelling of Tudor court life. Her novels are known for their intricacy, depth of research and powerful stories.