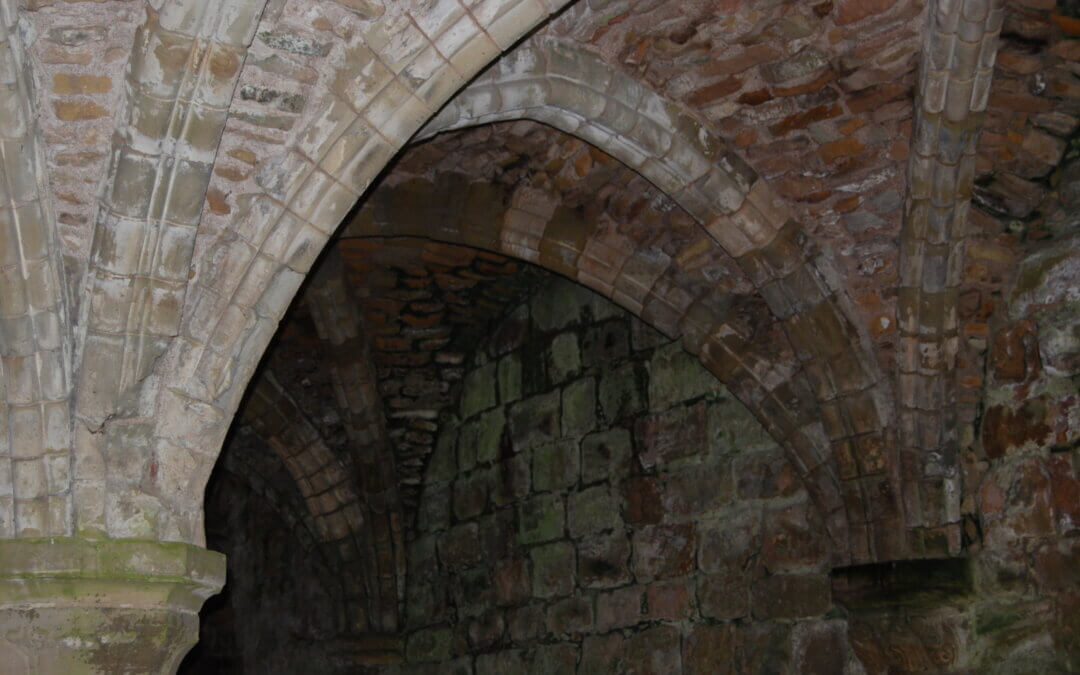 One of the lovely things about living in Britain is how you are really surrounded by history. Most of the time we don’t notice it. Of course, living in London, I know that there are medieval places like the Tower of London, but most people don’t visit them very often. What brings home to me how much the past is all around us, is that when we go to visit some historic site, as we did recently with Ironbridge, we so often end up in another (often much older) site that we stumble across on the journey. This time it was the remain of the 12th century Cistercian Abbey at Buildwas which is a pleasant walk along the Severn from our hotel in Ironbridge.

Like most of the abbeys in England, Buildwas was closed down during the Reformation and the lead was stripped from the roof so little is left but the walls. At Buildwas, though, the remains are in better condition than many other places. (A lot of historic abbeys are essentially just a few rows of stone marking out where the buildings once were.)

A particularly well-preserved part of the building is the Chapter House (where the monks held their meetings). It’s a small building as the abbey was actually quite a small community, but its vaulted ceiling reflects the fact that this was a prosperous place.

The guide books get very excited about the original tiling on the floor. The tiles are original and very beautiful but a close look at the floor shows that they have been reset over the centuries. This isn’t the original floor. In fact, part of the reason for the relatively good condition of the Abbey may well be that it was given by Henry VIII to the Grey family, who moved into the Abbot’s House. The family lived in it until the 16th century when it was sold but continued to be lived in as a private house. By the 19th century the Romantic movement meant that people valued having medieval ruins in their back garden and the work on the Chapter House floor and other evidence of repair work suggests that the owners of Abbey House were responsible for arresting the further decay of the abbey.

The abbey is now owned by English Heritage but the Abbot’s House and some of the buildings adjacent to it are still in private hands.

The abbey had some historical significance. Abbots in the early years of the abbey often acted as agents for the Plantagenets. The political importance of the abbots is reflected in the frequency with which they were summoned to attend Parliament during the reign of Edward I (1272 – 1307). The abbey fell from grace in the succeeding centuries, but the remains are still things of beauty and a reminder of our country’s past.