Why is there an iron bridge at Ironbridge? 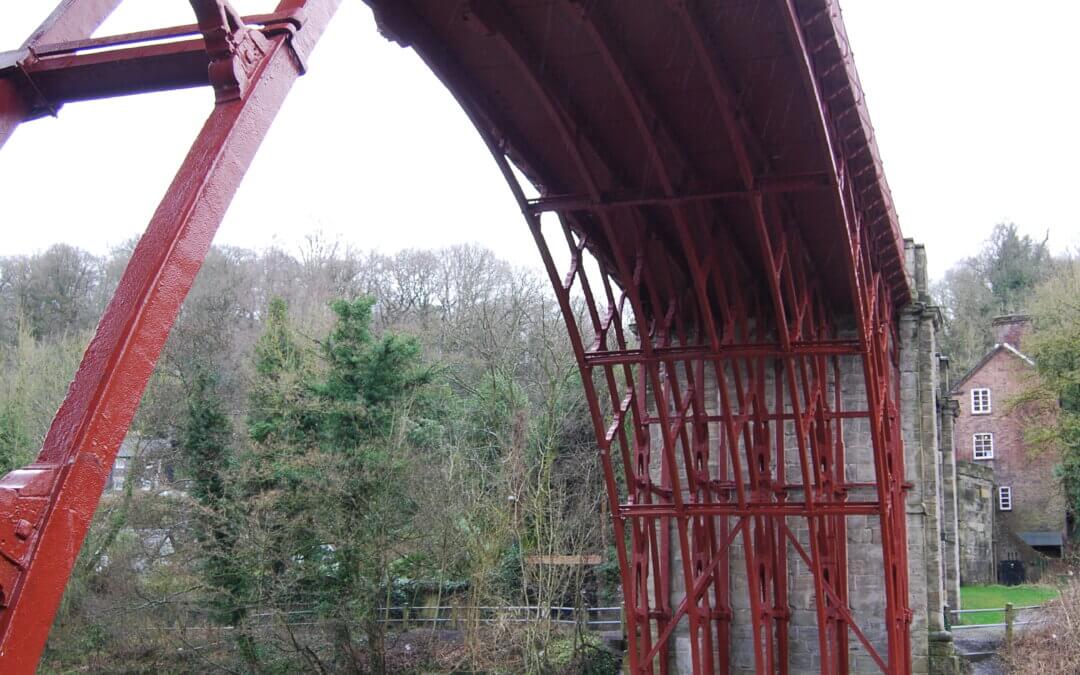 Last week we looked at the bridge at Ironbridge, but why was the bridge built there? Obviously people wanted to be able to cross the river, but we saw last week that the bridge was much more than just a utilitarian structure: it was showing off a new technique for producing iron. The iron bridge would have been impossible using the old technology of wrought iron, where iron pigs (basically lumps of iron) were beaten into the shape needed by smiths. The bridge was made of much bigger sections of iron than a smith could work, using the new cast iron technology.

Before there was an iron bridge, the area that now goes by that name was just part of Coalbrookdale, a flourishing industrial community that had grown up alongside the Severn. People had been smelting iron there since at least the 16th century using primitive smelters called bloomeries.

By the 17th century iron was being produced using blast furnaces where air is forced (blasted) into the furnace to increase the temperature. The photo shows the remains of the old blast furnace in the original Coalbrookdale iron works, now a museum. (The date of 1638 is now believed to be wrong, as an old photograph shows it originally said 1658.)

The Severn Gorge carves its way through a region rich in minerals, including iron ore. The Gorge had done much of the initial mining for the people who lived there, exposing seams of minerals in the sides of the Gorge.

Originally the iron would have been smelted using charcoal, which needed a plentiful supply of wood, another natural resource that the Gorge was (and, as you can see in the photo, still is) well endowed with. Later blast furnaces would have used coke from coal which is also found in the area and which, thanks to the gorge, could be extracted without deep mines.

Two other things were needed for an efficient blast furnace. One was limestone which (have you already guessed?) was found in the gorge.

The other was a supply of water to power the bellows that forced air into the furnace. This was provided not by the Severn itself but by the streams that ran down the steep sides of the Gorge.

The steepness of the Gorge walls even assisted in the building of the smelters. A blast furnace is built so that ores, fuel and limestone are put into the top of the furnace and iron is drawn from the bottom. This can call for a substantial building but, in Coalbrookdale, foundries were built on the side of the Gorge so that material was simply tipped in higher up the hill and the metal conveniently arrived at the bottom.

The coal that occurs in the area is low in sulphur and thus particularly well suited for making coke. In 1709 Abraham Darby made a blast furnace that ran on coke. The higher temperatures obtained meant that the furnace produced quantities of liquid iron.

Darby had also imported into England a system of casting iron into dry sand moulds, rather than  loam or clay moulds. (And, yet again, it turned out that the kind of sand needed was readily available locally.) This enabled him to produce cast iron items more efficiently (and hence cheaply) than traditional moulding. It was Abraham Darby’s new technology that produced the iron segments that his grandson was to use to build the iron bridge.

Not only was the topology and geology of the area ideal for the production of iron but, at a time when most heavy goods were transported by water rather than by road, the Severn, which runs through the middle of Coalbrookdale, provided a ready route for taking the finished iron to market.

The blast furnaces ran for over a century but were closed down around the 1820s, though the foundries remained in use. By the 20th century, though, iron production in Coalbrookdale was in decline as it failed to compete with new technologies and production methods. By 1946 the Coalbrookdale site was making Aga stoves in the last remaining foundry at Ironbridge. In 2015 Aga was bought by an American company and in 2017 the factory was closed on the grounds that it was no longer “economically viable”.

The whole area is now a museum, recognised as a cultural site by UNESCO. When we visited in February all the museums were closed on Mondays and Tuesdays (the days we were there) and soon after we returned to London, the centre of the town was under water. The area has a melancholy beauty in February and is well worth a visit. The melancholic air is fitting though: Ironbridge was a centre of industry when the natural advantages Britain enjoyed meant it led the world. Now it floods regularly and all it has to offer the world is tourism, and that only five days a week.