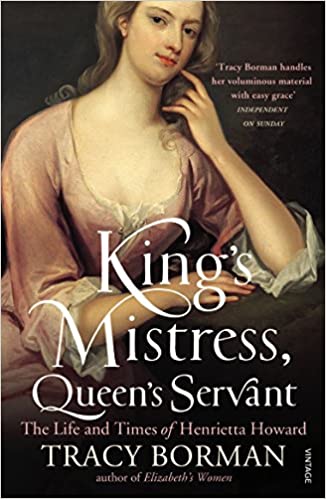 Tracy Borman’s book was written before this sudden flurry of interest in Henrietta, but it remains the standard book for people wanting to know more about her.

The instant summary of her life (as used to appear on posters advertising the house) is that she was the mistress of George II and she was given Marble Hill as a retirement gift on leaving the court.

Tracy Borman’s book shows that she was much more interesting than this (inaccurate) summary suggests.

Henrietta had an unfortunate life. Orphaned at an early age (her father was killed in a duel), she had made an unfortunate marriage in 1706 to a man who robbed her, beat her and essentially made her life hell. Reduced to living in lodgings in “an unsavoury part of the capital” and often skipping meals because her husband took all her money, Henrietta moved into a single room shared with her son and a husband she by now loathed, sold her furniture and saved whatever money she could from an allowance from her father’s will until she had gathered enough to pay to travel to Hanover. Her plan, almost incredibly bold, was to ingratiate herself with the Hanoverian court so that when Queen Anne died and the Hanoverians inherited the English throne, she would be well placed for a position in their London court. (I know it’s complicated but just trust me on this. We love to tell ourselves that the monarchy traces a single line back to Alfred the Great, but that line has an awful lot of kinks in it.)

Despite the fact that she arrived impoverished and with her drunken, loutish husband in tow, and that she was only on the very fringes of the English aristocracy, her desperate gamble succeeded. She made such a favourable impression on Sophia, the Hanoverian monarch who was tipped to inherit the English throne that Sophia promised that she would make her a Woman of the Bedchamber if she became Queen of England.

Queen Anne inconsiderately refused to die. Henrietta, though now a fixture in the Hanoverian court, had no official status. In 1714, Sophia was the first of the two royal ladies to shuffle off this mortal coil. Weeks later, Anne followed.

In the absence of his mother, George drew the lucky ticket that made him king of England. He took his time travelling to his new realm. (He never liked the country and almost resented being king.) Eventually, though, a date was fixed for his coronation and Henrietta and her husband returned to London ready to welcome their Hanoverian friends to their new home. It was a tense time. With Sophia dead, there were no firm promises of any position in George’s court.

Henrietta hitched her wagon to the rising star of George’s daughter-in-law, Caroline. Caroline’s husband (also George, because Hanoverians were unimaginative with names) would become king on his father’s death. Fortunately, Caroline had become very friendly with Henrietta in Hanover and honoured her mother-in-law’s promise that Mrs Howard should become a Woman of the Bedchamber.

Henrietta, then, was a professional courtier. Intelligent, charming and diplomatic, she naturally rose through the ranks of the court. By 1718, she had become George’s mistress, whilst continuing to serve with his wife, who she would spend hours with almost every day.

There is no suggestion that this was a grand passion. George was unfashionably devoted to his wife. In fact, one reason for taking a mistress may well have been to counter the impression, widely held in court, that it was Caroline who made all the decisions in their household. George was not a particularly sensuous man and his lovemaking took place to a strict timetable. A mistress was customary and convenient and Henrietta, subtle enough to serve both George and his wife, was ideally suited to the position.

She remained George’s mistress until 1734 by which time George was king. During that time her links with Caroline and George made her a key figure in the intrigues of the court, although she did her best not to become identified with the various factions. Eventually, though, she was inevitably drawn into politics and championed the Tory cause, to the intense irritation of Queen Caroline, who was a supporter of Walpole. The political divisions in court and her own fading charms (she was 45) led her to find life in royal circles increasingly difficult and she was relieved when the break with George was finally official.

She had known a break was coming for years and had prepared her house in Marble Hill as an escape from court life. She loved the place and spent as much time in it as possible. It’s not true that it was a retirement present from the king: she had bought it with her own money while she was still serving at court. However, the king did make her generous settlement when she left which enabled her to finish the building (work was constantly being delayed because of cost overruns) and live there comfortably.

Her appalling husband had died, leaving her free to marry again. She wed George Berkeley in 1735. She was too old to have children by then, but the couple were devoted to each other and she moved nieces and nephews into Marble Hill where they lived very happily as a family (albeit it one with a degree of coming and going among the younger family members).

Henrietta’s terrible experience of her first marriage and the helplessness of her position as a woman made her what we might well think of as an early feminist. She helped women friends and relatives to protect themselves against the predations of their menfolk and her will, when she finally died, tied up bequests to women in a way that ensured that they maintained control of their money in an age where most women were entirely dependent on husbands or fathers.

She had not only been involved in court and political life, but was the centre of an intellectual circle that included the playwright, Gay; the poet, Pope; and the novelist, Swift. Her private memoirs are regarded as one of the best guides to life in the early Georgian courts and the house at Marble Hill (the designing of which had been one of her main pleasures in her later years at court) still stands as one of the finest Palladian villas in England. (A quick Google search suggests several other contenders for this title but it is certainly a fine example.)

Even this whistle-stop tour of Henrietta’s life has run well past my usual word-count and Tracy Borman’s book is an impressive 350 pages. Sadly, though, she is distracted by the splendours of the Georgian court and the eccentricities of the courtiers and we can lose sight of Mrs Howard for extended periods. Pages are dedicated to details of the procession in which George I entered London, though Henrietta was not involved. There are rambling asides on Swift’s career and the social rituals of Bath (although, in fairness, these were rituals that Henrietta definitely joined in). But, although there is an awful lot about Marble Hill there are huge gaps in what we are told about the house. As it stands today, it is unliveable in. (There are, most obviously, no cooking facilities.) In fact, it has been described in the past as really just a ‘party house’ rather than a proper home. Borman makes it clear that it was definitely ‘a proper home’ and one which was lived in by young people as well as Henrietta who was in her mid-forties before she could spend much time there. I’m biased, knowing the place as I do, but a little more about the domestic arrangements would have been appreciated, given how much of the book is devoted to discussing the house.

Much the same is true of Hampton Court. A visit there makes it clear that the physical position of Mrs Howard’s rooms put her geographically close to the centre of power and this is important in understanding why she was (as Borman says) known as ‘the Swiss cantons’ (connected to everywhere but independent of all). This is not at all obvious from her account.

Sometimes Borman seems overwhelmed by the volume of material she has to hand. Why so much irrelevant discussion of details of the peccadillos of the young maids-in-waiting while Henrietta’s London house in Savile Street gets only a couple of pages? The Hanoverians were expert in distracting attention from things that mattered with glorious public displays (like the coronation, which is described at length) and riveting private feuds. Borman seems no less distracted than the citizenry of the time. There are also one or two occasions where I think some of her details is questionable. I would doubt, for example, if Twickenham is really only a couple of hours from London by river. (On a favourable tide and with a following wind, maybe, but other historians of the period would differ.)

Is it worth reading? Emphatically yes. Henrietta Howard is a fascinating figure and hers is a wonderful story to tell. Tracy Borman’s book is a good place to start, but I hope it is far from the last word we will read on this remarkable woman.