A trip to Ironbridge 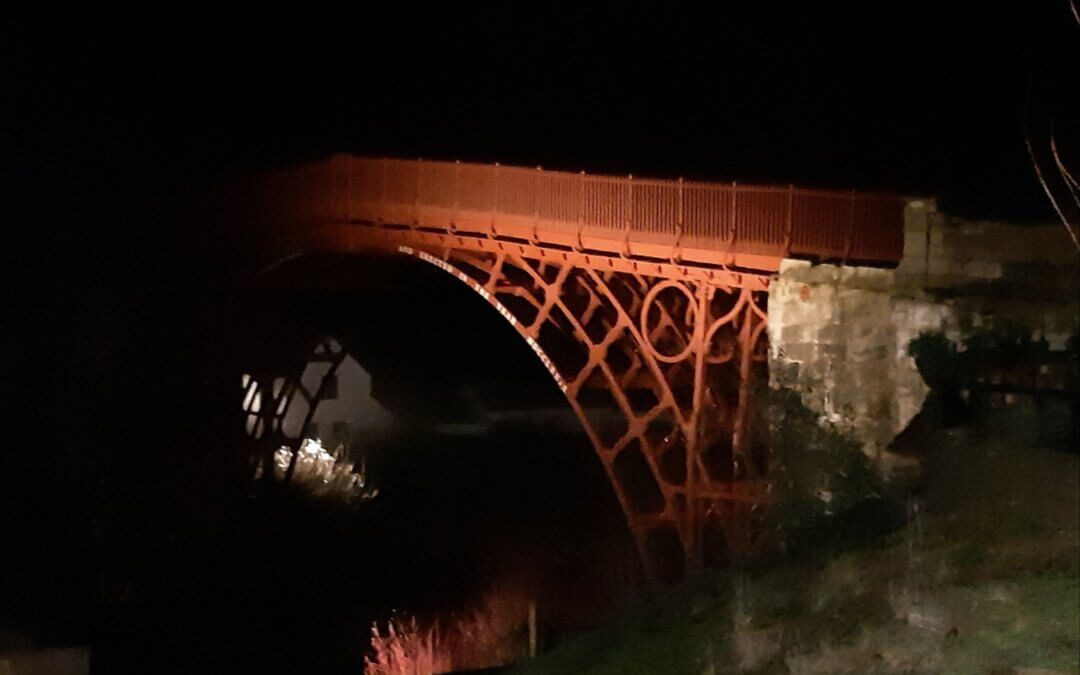 It’s time I wrote a post based around late 18th century history. After all, my books start in the late 18th century and that used to be the focus of my blog before there was a long pause in being able to get about and explore Britain’s past. But now we are back to something approaching normal, so my beloved and I went to Ironbridge for a Valentine’s break. Not, perhaps, the most romantic destination and you could be forgiven for saying that my beloved suffers for sharing her life with a historical novelist – except that the trip was her idea.

I knew next to nothing about the place. I’d read that it was pretty and the home of the world’s first iron bridge and, of course, I’d seen pictures of its high arc over the River Severn.

There’s no escaping that image, so let’s get it out of the way now.

It’s a shame that everyone just looks at that and moves on, because there is a lot more to this bridge than you will take away from a quick look at that iconic image.

Firstly: why the shape? I admit I’d just assumed it was something to do with the properties of the iron: they needed an arc for structural reasons as with the traditional stone bridges that iron bridges were soon to replace as the favoured way to cross water. In fact the shape was to allow sailing vessels to pass underneath at the centre of the river. At the time the bridge was built (it opened in 1781) the Severn was an essential transport link and the river was busy with shipping. In the 18th century the Severn was the second busiest river in Europe. Many of the boats sailing there were Severn trows (rhymes with ‘crow’) a vessel unique to the river. Although they could lower their masts to pass under bridges, it was obviously better that they did not need to.

Even allowing for this, the arch seems high, but levels in the Severn vary hugely. The river often floods (ancient flood defences are obvious on the riverside properties in Ironbridge) and, when the river was running high, sailing vessels could spend days waiting for the water to fall low enough for them to safely pass under the bridges. The iron bridge was designed to enable trows to pass even when water levels were very high.

It’s worth noting, in passing, that flooding remains a serious problem and the levels recorded on this riverside pub suggest it’s getting worse.

The second thing to notice about the bridge is just how beautifully it’s made. It isn’t just a functional piece of engineering: it’s a work of art.

The pieces of the bridge were cast using sand moulds. It was a new technology at the time and the pieces were quite small compared to the elements of bridges just a few decades later. They were not welded together, but fitted like wooden joinery with dovetailing between the pieces. And what pieces! The bridge is packed with decorative twists. It’s a photographer’s dream.

Why so beautiful? The bridge ran massively over budget and nearly bankrupted its main investor. Why did they produce something quite so elaborate? The original bridge was a single span. The two extra spans to the north were built later to replace wooden spans that were failing and they are much more functional. The point of the original bridge, though, was to demonstrate what could be achieved with the new cast iron technology. The bridge became famous and a major tourist attraction with people travelling from all over the country to see it. (The builders put a hotel at the end to profit from the interest.) The reputation of the Coalbrookdale iron works was established and the men who built the iron bridge were commissioned to build many more (less decorative) bridges. In fact, an example of their later work can be seen just outside the town where they built a railway bridge in 1863. You can see how much the technology of cast iron has developed. The huge girders of that bridge were unthinkable less than 80 years earlier, but the plaque proudly proclaims ‘Cast and Erected by the Coalbrookdale Company’.