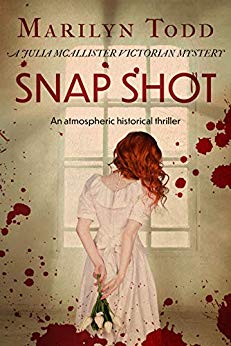 Marilyn Todd’s Snap Shot is described as a Victorian mystery. The thing about the Victorian period is that it really is very long. I was, at first, confused by the box Brownie cameras and the telephones, and a general feeling that we were, perhaps, more in Edwardian than Victorian times. The answer is that we are in a Victorian mystery, but only just. No date is given in the book, but the arrival of the box Brownie pins it down as about 1900.

1900 is a little outside my era: I’m more of a mid-nineteenth century writer myself, but Todd does seem to have a strong sense of period, although occasional intrusions by an authorial voice from the 20th or 21st century can be off-putting. When we are told of one character that “the V-sign he flashed wasn’t for victory” we are firmly in the Second World War or after. A phone might have “rung off the hook” in 1900, but it’s very unlikely – it’s definitely an idiom from the second half of the 20th century and while women nowadays may often complain of being “objectified” this isn’t a term that was much used in the period the book is set. Todd never puts these phrases in the mouths of her characters, but she would be better off avoiding them altogether. On the other hand, she often captures the period with beautiful images that gives a sense of the times without beating us around the head with “period detail” to prove how carefully it was researched (though it clearly was researched very carefully). Take this example, when a character takes a cab ride:

He could walk. It was only a mile. But there was something calming about the rocking of the hansom. The rhythmic clop-clop-clop of horseshoe against cobble. The smell of freshly polished leather.

Todd writes very well, with a lovely use of unlikely metaphors.

On the table, bluebells from the Common threatened to wilt but so far hadn’t plucked up the courage.

Or, of a restless man, our heroine watched him “dart about like a wasp with the runs”.

Ah, yes, our heroine. The story is told mainly from her point of view and, fortunately, she is a sympathetic character – a woman making her way in a man’s world. The difficulties put in the way of women in 1900 are spelt out but gently woven into the story. For example, it was legally difficult for a woman to run her own business.

Timbered Tudor buildings overhung the cobbles, rickety and narrow, with signs above the shops creaking in the wind. David Hart & Sons Pharmaceuticals, est 1823. Js. Simpson, Family Butcher. Thos. Payne, Barber. You could be forgiven for wondering if women actually existed.

Even to rent rooms for her work, she needed to find a man to vouch for her.

… Oliver, of course, signing the paperwork, women being too weak and too stupid to manage such matters themselves.

Julia McAllister, though, is not to be put off by these obstacles. She is gutsy, beautiful and, for 1900 has a very open mind – but as a photographer of dirty postcards, this is definitely a good thing.

Somebody is murdering Julia’s models and trying to frame her for it. Julia needs to find out who the real murderer is before the dangerously handsome Detective Inspector Collingwood arrests her.

The plot bowls along with plenty of gruesome deaths and a little bit of sex to keep the pages turning. Finding out whodunnit came as a surprise, but not so much of a surprise as to make me feel cheated. Thinking about it, there may have been the odd tiny gap in the plot, but far less than in the average TV detective story and, really, who is going to give it quite that much attention? It’s frothy and it’s fun and it has a convincing historical background. By the end, Julia is ready to leave the country, but I rather suspect she won’t. This book is set up for a run of sequels and I look forward to reading them.