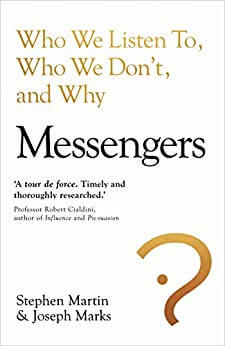 The subtitle of Messengers is ‘Who We Listen To, Who We Don’t, And Why’. In a world that has given us Donald Trump and Boris Johnson, learning the answer to this question seems worth the effort involving reading the book, but having finished it I’m not sure that I’m any clearer.

This is a pop psychology book with all the strengths and weaknesses of that genre. It starts out with a lot of anecdotes – some mind-blowingly banal (somebody who tweeted something on the same day that Barrack Obama tweeted something very similar got millions fewer re-tweets) and some quite fascinating (employees of an Indian entrepreneur with a caring management style offered to work for nothing when her business was in trouble).

Anecdotes, though, obviously don’t make up a convincing argument so the book quotes lots of psychological experiments, some by the authors and some from other sources. The problem with this approach is that you have to take an awful lot on trust. I’m sensitive to this because my degree was in Experimental Psychology and I’m aware that very small differences in the way an experiment was conducted can have quite profound influences on the outcome. It’s difficult to be confident in the results of an experiment which has been reported in a few short paragraphs. This is an inevitable problem with this kind of book and does not reflect badly on the authors, but it does mean that if you accept their arguments you will trust the research and if you don’t you will (probably at least sometimes justifiably) dismiss the research. In fairness, research studies are well footnoted and you can follow them all up, but it is unlikely that the non-specialist reader that this book is clearly aimed at will ever do that. You have to take a lot on trust and, ironically, one of the main messages of the book is that humans are terribly bad at judging when they can take stuff on trust and when they should be more sceptical.

Leaving these reservations aside, what does it tell us? Very crudely put, it suggests that we pay more attention to the characteristics of the messenger than we do to the characteristics of the message. We like leaders to be tall and square jawed, or empathetic and caring. It’s an analysis that explains the appeal of Donald Trump. He is a classic alpha male – bombastic, dominant, and pugilistic. Some of this, according to the book, is innate. He was born with a face shape that is associated with dominance. (There is a photograph that illustrates how facial height to width ratio is calculated, enabling this to be quantified.) Some of it may have been learned over his lifetime: the way he stands, the amount he gestures with his arms, the deep timbre of his voice. Perhaps it’s significant that when comedians who do not share his political approach mimic him they tend to emphasise the speech mannerism where his voice can suddenly move into quite a high register. Or perhaps it’s not – the authors don’t mention this.

That’s part of the trouble. Human behaviour is complex. Few people are consistent. Boris Johnson is often compared to Donald Trump, but untidy blonde hair is not the attribute that the authors think is important. On the attributes they do think important – posture, vocal mannerisms, etc – Boris is almost the antithesis of Trump. He bumbles on, waffles and, to a degree, charms – but he hardly fits the stereotype of an alpha male.

In fairness to the authors, they do acknowledge the complexities that underlie many of the behaviours they analyse – but perhaps still not enough. So, for example, at one point they write:

[Apologies] are … immensely powerful social tools, critical to the repairing or re-establishing of relationships. Australian Prime Minister Kevin Rudd provided a formidable demonstration of this when, in the course of a four minute speech in February 2008 he issued a public apology for the way in which indigenous Australians had been treated years before he himself had achieved public office. He recognised, he said, that he needed to “apologise for the laws and policies of successive parliaments and governments that have inflicted profound grief, suffering and loss on these our fellow Australians”.

Much later, in a separate discussion of apologies, the authors point out (in line, as it happens, with my own review of the literature1) that an apology is only likely to be affected if it is “made quickly… made sincerely. And it needs to be made in a way that shows remorse and commitment to change in the future.” Kevin Rudd’s four minute speech could not possibly have met these criteria and yet the authors explicitly link it to “the highest satisfaction rating of any Australian Prime Minister”.

Obviously there is more going on than can be covered in one relatively short volume. In fact some of the simplifications border on the absurd. At one point the book argues that an experiment showed that facial features are so crucial that “a glance at the faces of candidates running for election was all that was needed to make an informed, and largely accurate, estimate of who would (and indeed did) win.” Whilst what a candidate looks like can be a significant factor, the suggestion that facial appearance can be used to accurately predict the outcome of real elections would, if true, suggest that the selection of legislators by popular ballot is an idea that needs to be reviewed. Personally I am not suggesting that we abolish democracy, but that we view statements like this with grave suspicion.

There is usable, and indeed valuable, stuff in this book. It does no harm for us to be reminded how much we allow irrelevant assessments of people’s social class, dominance, or empathy to affect what should be rational judgements. This can even extend to favouring loan offers which are accompanied by a photograph of an attractive woman rather than an attractive interest rate. There are practical lessons to be learned, too. My wife does some university lecturing and I have passed on the information that lecturers who make more arm movements whilst speaking are perceived as better teachers by their students. In the new world of university education, where student assessment is critical to career advancement, I can confidently predict a fair amount from arm waving next term.

Overall, though, I found this an irritating book – neither an easily read series of anecdotes nor a serious academic study, it repeatedly overpromised and underdelivered. If, however, you honestly believe that you would never form your initial (and surprisingly firm) view of somebody based on the logo on their polo shirt, then perhaps you need to read it.