‘An Unwilling Alliance’ by Lynn Bryant 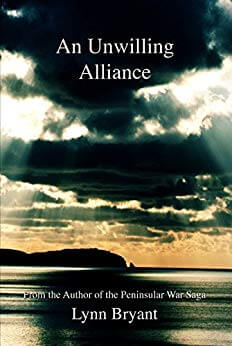 Lynn Bryant writes stories of war and love in the Napoleonic era. One day I may make her hero, Paul Van Daan meet my James Burke just as, with a sort of inevitability, Lynn and I met up at various conferences about Napoleonic military history.

Lynn has written several stories about Van Daan’s adventures in the Peninsular War, but she has now branched out into another series featuring the exploits of Captain Hugh Kelly, one of the stalwart sailors who kept Britain safe from Boney. It should be an interesting series. It’s important to remember that, at the time, the Navy was much more highly regarded than the army and the war in the peninsula was seen as a bit of a sideshow. The real land fighting was being done by other countries further north in Europe while the Navy was engaging French vessels on a regular basis. In fact, our land offensive in Spain was possible only because of British control of the western coast of Iberia, maintaining our lines of supply and, in the early days of the war at least, constantly harassing French positions near the coast.

An Unwilling Alliance is set in the year before the start of the Peninsular War and centres on the British attack on Copenhagen in 1807. This is one of those military engagements that the British prefer to forget all about. British ships bombarded the Danish capital when Denmark was a neutral country. The aim of the exercise was to make the Danish fleet unavailable to Napoleon if, as expected, he invaded Denmark. However, there were inevitably considerable civilian casualties and nowadays the attack would almost certainly be seen as a war crime. Even at the time (as reflected in Lynn’s book) there was considerable disquiet about the action.

Unlike me, Lynn is a “proper historian” (shortlisted for the first Society for Army Historical Research fiction award, no less) and she provides more military detail than I do, with a lot of very precise factual information about the deployment of particular regiments and brigades. I remember reading her fictional account of an action in the Peninsular War and then later coming across a contemporary description of it in my own research and realising how well I understood the situation from Lynn’s story. She really is very good and weaves the detail into her fictional narrative. But An Unwilling Alliance is not just a convincing war story. It is also a romance. In fact the opening chapters are almost entirely devoted to Hugh Kelly’s pursuit of the girl who is clearly destined to become the love of his life, Roseen Crellin.

I can get very irritated by Georgian romances. A particularly annoying example was the recent TV adaptation of Sanditon. Young ladies meet unsuitable men in the peculiar absence of chaperones. Introductions are sloppily informal. Any real Georgian woman behaving in this way would promptly be labelled a tramp and unfit for decent society. So I could easily have given up by the end of Chapter 1 as Roseen Crellin wanders unescorted across the hills of the Isle of Man in contravention of every rule of decent behaviour. However, Lynn gives Roseen a convincing back-story to explain her behaviour and, more importantly, the poor girl is shunned by decent society and we see the social cost of breaking with convention.

When Roseen’s ill-considered behaviour destroys her budding romance with Hugh Kelly and threatens to ruin her life, the story catches something of the reality of the limitations that the world placed on young women back then. And because the social environment and the character of Roseen have been so well established, when an even more outrageous breach of decent behaviour results in a near miraculous reuniting of the lovers, I was perfectly prepared to accept it. This is, after all, as much a romance as a war story and, though I won’t give the game away with the details, as soon as Roseen sets out on a particularly inappropriate venture we all have a pretty clear idea of where it will end up.

Lynn writes in fluid prose. The exciting bits are exciting, the romantic bits are romantic and the whole thing has a wonderful sense of place. Lynn is a proud resident of the Isle of Man and her love of the island comes through. It made me want to visit, and what better recommendation can you have for a writer’s descriptive powers?

All in all, I found this a book that is difficult to fault. If you like Georgian romances, Napoleonic war stories, or just a dashed good read, I do strongly recommend it.

(Some people will think that I’m only saying this because I know Lynn. Any writer friends who’ve been on the wrong end of a criticism of a book that I didn’t like will be happy to disabuse them.)

An Unwilling Alliance is available from Amazon: mybook.to/UnwillingAlliance