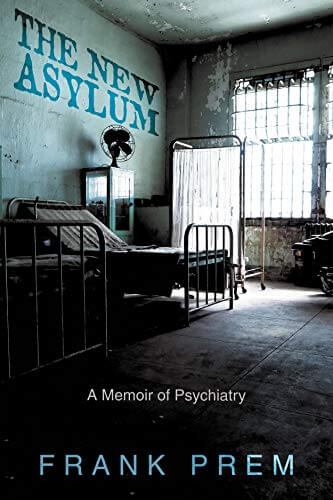 I’ve been very enthusiastic about Frank Prem’s first two books of poems, so he kindly sent me a copy of his latest, The New Asylum.

I’ve taken a while to read it and I’m finding it quite a difficult book to review. When I was at university I spent one summer vacation working in a psychiatric hospital. It says a lot about the period that the official name of the hospital was the – Hospital for the Mentally Subnormal and Severely Subnormal. I doubt it’s still called that these days, although the cruel bluntness of its name was at least honest, unlike the weaselly ‘learning difficulties’ of today. I was on a ward for ‘psychotic and disturbed’ patients. Daily life could include violent attacks, trying to reassure a paranoid patient that the others didn’t all hate her, and dealing with random chaos. A tutor at university said that I described behaviour that was already unusual as the increased availability of effective drug treatment meant that patients seldom exhibited such florid symptoms. Perhaps part of the problem was that we had only limited access to drugs that could be used for acute interventions because they had to be administered by a qualified doctor and there was only one on duty in the whole hospital. By the time he got round to our ward in response to an urgent phone call we usually had the patient in a straitjacket (yes, we still used them) and the immediate crisis was over. Despite all this, though, it was a happy summer. I won’t say I made firm friends, but I did go back to visit patients I remembered with affection. There was the woman who was being prepared for a half-way hostel. “What do you want to do when you get out?” “I want to rob gas meters, Tom.” I wished her luck. She was a pleasant person and it’s good to have a goal in life. And the lady who thought she was the Pope always tried to be nice. “Do you want to hear a dirty joke, Tom?” “Go on then.” (It was always the same joke.) “A white horse down a coal mine.”

Why am I telling the story of my summer instead of reviewing Prem’s book? Because his poems took me back to that summer, which I haven’t really thought about for decades and it has aroused emotions I had forgotten. The hospital, by today’s standards was (like Prem’s) a dreadful place. And (like Prem) I had no idea what I was doing. The nurses had little formal training and relied on experience and instinct. They were wonderful and, like Prem, I am amazed at how they just kept on dealing with the blood and the mess and the violence and, despite everything, created a safe and, astonishingly, kind place for the people who lived there. The doctors (noticeably absent in Prem’s poems too) were never around, leaving the nurses and the nursing assistants (that would be me) to cope, and we despised them. But we got along and nobody died. (Given that we had actual murderers on the wards, this wasn’t something you could take for granted.)

Take it away, Frank:

A good poem can touch the heart and take you to places you may have lost and it can bring back the sad things and the happy. These are good poems. I found them difficult to read, but I’m glad I did. They may not have as much effect on you as on me, but I hope you read them. Frank has things to say and it would be good to hear them.

in aftermath
it seems so clear

there are few mental-health
happy endings

and there are no
simple cures

and minds that won’t
take the time
to learn

of bearing
other people’s burdens

there is no room
no role for heroes