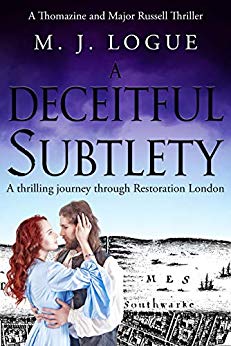 This is the second of M J Logue’s books about Major Russell and his young wife, Thomazine, and I’m happy to admit that I’m a fan. What I love about books is the characters and their relationship. Essentially these are love stories for grown-ups. This is still more true of A Deceitful Subtlety than the first book, An Abiding Fire, for the Russells are now settled in the Chilterns, concentrating on the rearing of sheep and raising a family. Respectability beckons, though theirs is still a passionate relationship.

We follow their falling outs and their making up, their misunderstandings and their struggles to iron out the wrinkles in their relationship. There are more of them than usual, for Thomazine is pregnant and moody and her temper is not helped by the sudden appearance of a woman who may, or may not, be an old flame of her husband’s. When husband and old flame have to journey to Bruges, Thomazine goes too, braving sea-sickness and the funny foreign ways of the Dutch so that she can keep an eye on her man.

There’s a nice sense of ‘foreignness’ to Bruges and an interesting picture of the English émigré community there, though I got little sense of what Bruges itself was like, which is sad as much of the town (a UNESCO World Heritage site) still stands and its beauty deserves to be celebrated. Why are they in Bruges? I’m honestly not quite sure. There is a notional reason, but as with much of the plot, it didn’t quite make sense. This is, to be honest, not a book you read for its plot. In fact, I was completely bemused about a lot of it (no details because of spoilers) until I read the very long and fascinating historical note. It’s clear that Logue has researched her period extremely well, but if you don’t already have a definite grip on some minor characters of the time, you’ll likely have no idea what’s going on for much of the book. Who is William Scot and why are we looking for him? The historical note explains, but in the novel itself we are just constantly assured that he is a man of mystery.

“I would have said to you that there was not a man in this city about whom I did not know something, even if it were only that he keeps a second household in lodgings off the Mariastraat, or favours this tailor over that. I know nothing at all about Mijnheer Scot, and that troubles me. No one speaks of him, no one at all. He is like a man with no face, you know? He is alive, he breathes, so much I know. But no one speaks of what he is as a man.”

This does leave rather a hole where one of the main characters should be – an irritation that becomes more marked as it turns out that another person we meet is a fascinating historical character who is lost in a rather insubstantial sub-plot. It does raise questions though – like why are people so concerned about a man of very little importance while showing so little interest in somebody of real significance and – probably more relevantly to a writer – somebody that the reader will have heard of?

No matter. In some books the slightly rickety plot would be a real problem, but fans won’t be reading it for the plot. We want to know if Thomazine’s pregnancy will end safely, or if the scheming minx who started this all off will have her wicked way with Russell. (She won’t, of course, but will Thomazine believe this?) We may even end up caring about the latest addition to the cast – a rather repulsive small black dog who I fear we are all destined to come to love.

If all the domesticity gets a bit cloying (I didn’t think so, but it’s possible someone might), be assured that there is violence and sudden death and even torture (though of an anonymous individual in what are literally “noises off”). You may be confused at times, but you won’t be bored and you will (I hope) lose yourself in the love story.

And did I mention that Logue just writes really well? I show my age by caring about this in a world of plot-driven stories where no sentence runs to more than fifteen words and the vocabulary is deliberately unchallenging. Here, for no reason at all, she is describing a bit of excitement while they are penning their sheep to be shorn. If you’ve ever watched (or tried to help) as sheep are penned up, this will have a horribly familiar ring to it.

A chalky-blue butterfly settled briefly on Thomazine’s wrist, its threadlike legs tickling her hot skin, and she smiled down at it. Had she not been looking down, her eyes would not been caught by the old bellwether. A cunning villain, that sheep, with eyes as yellow and knowing as the Devil’s and twelve years of malevolent experience under his fleece. His witless ladies were milling and bleating in panic, but he’d been here before, that one. His baleful slotted eyes met Thomazine’s.

And he was out, the hell-spawned eunuch, forcing his scrawny besmottered flanks through the meagre gap in the hurdles. Where he went his ladies followed, and suddenly there was a flood of pounding hooves as the rest of the flock went with him.

If you don’t love those paragraphs, this probably isn’t a book for you. But if you do, you’re in for a treat.