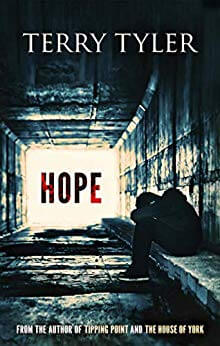 Terry Tyler’s move into dystopian novels has led her into increasingly political territory and Hope is a straightforwardly political book. It foresees a world where a right-wing government uses draconian powers to round up the economically inactive and, effectively, imprison them in camps where they are fed contraceptives with the intention being that the unemployed will eventually die out. There are sideswipes at lots of other things as well: the surveillance society; state initiatives to make people live healthier lives; the ubiquity of social media; the elimination of independent shops by huge chains; the increasing power exercised by the USA over Britain’s affairs.

Terry Tyler makes a good case that this could happen here, but whether or not you are convinced probably depends on your political opinions. It’s not a book you want to give to that aunt of yours who is a stalwart of the local Conservative party

Like a lot of agitprop (and that’s a word we’ve heard a lot less of since the 1990s), characterisation is very definitely in second place to plot. Reading this has made me revisit 1984 and it’s clear that the slightly sketchy drawing of all but the main character is in a long tradition of books like this, and if we don’t hold it against George Orwell, we shouldn’t hold it against Terry Tyler. But is her story up there with Orwell’s classic?

Probably not. Tyler is a talented writer and her prose kept me going but her opening (an email providing the background to the plot) is hardly, “It was a bright cold day in April and the clocks were striking thirteen.” Orwell captures the misery of life in 1984 with acute observation of detail. Here he suggests that the food available is inadequate.

By leaving the Ministry at this time of day he had sacrificed his lunch in the canteen, and he was aware that there was no food in the kitchen except a hunk of dark-coloured bread which had got to be saved for tomorrow’s breakfast.

Terry Tyler is more specific but somehow fails to capture the sheer misery of the situation quite as well.

Our induction means we’re late, and there’s not much left. I eat pasta with a vaguely tomato tasting sauce, with a few things in it that might be courgettes.

The world Terry Tyler describes is not quite as grim as in 1984. The possibility of escape exists and the ending (slight spoiler) is not as remorselessly negative, although I was pleased that Tyler had resisted the temptation to provide a straightforwardly happy ending either.

Hope has a lot to say and it says it well. I’ve found myself reviewing it by comparing it with what must surely be one of the most influential novels of the 20th century and that suggests that Tyler must be doing something right. Hope is not 1984, but it is worth reading and thinking about. It ends with the country waiting for the results of a general election. Try to finish it before 12 December.

Hope is available on Amazon: https://www.amazon.co.uk/Hope-Terry-Tyler-ebook/dp/B07S89DK54