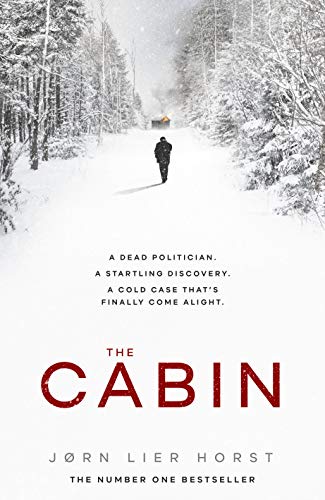 The Cabin is Jørn Lier Horst’s sequel to The Katharina Code, which I enjoyed so much that Penguin offered me an ARC of this latest one.

All the main characters from The Katharina Code are here: William Wisting, the police officer who led the last investigation; his journalist daughter, Line; the policeman from the Cold Squad, Stiller, with his unorthodox approach to obtaining confessions. Where The Katharina Code was, above all, a psychological thriller, The Cabin is more a regular police procedural, though the investigation Wisting leads is operating outside the normal police framework. He is investigating a crime that may involve a senior politician and the Director General of Public Prosecution, who can apparently instruct police how to proceed (we’re in Norway), is anxious that the investigation is conducted secretly.

Wisting runs the job from his own home, recruiting his daughter to interview suspects in the guise of her investigative journalism role. (Do they not have journalistic ethics in Norway?) The team work through suspects methodically, checking fingerprints, establishing alibis, researching links between criminals on the police intelligence database. Line asks questions the police cannot ask and gets an inside track on the links between the criminals, inevitably (it’s that kind of story) exposing herself to danger as the crooks realise she is working with the police.

The plot becomes fairly convoluted with an unsolved murder, a major robbery, an apparently accidental death of a suspect and various gang-related beatings all seemingly inter-related. Only at the end do we discover, thanks to an anonymous tip-off, what part the politician played in it all.

I’m being deliberately vague because of spoilers. It’s wanting to know how the crime works out that keeps you going. It’s not the characterisation: the police team are interesting, but this story adds nothing to the understanding of these people we gained in The Katharina Code

In the end, as in The Katharina Code, the psychology of the criminal is important, but this is only discussed after the crimes are all neatly solved. I suspect that Horst saw this as the core of the book, but the need to satisfy the story arc of a police procedural means it is rushed out as a coda at the very end of the story.

The Cabin is a perfectly serviceable detective mystery (though not helped by occasionally clumsy translation) but readers who loved the quirkiness of The Katharina Code may well feel disappointed.

The Cabin is available on Kindle (https://www.amazon.co.uk/Cabin-Cold-Case-Quartet-Book-ebook/dp/B07MM2QJMB). The paperback will be published on 12 December.