Round and Round: Terry Tyler 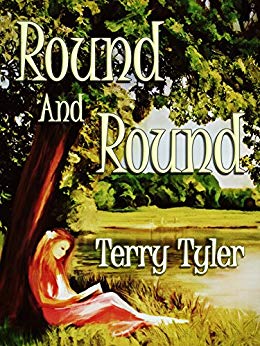 Round and Round is a novella. People don’t seem to take novellas seriously. Stephen King suggests (and surely he should know) that the novella just doesn’t appeal to commercial publishers. For King, books between around 20,000 and 40,000 words (Round and Round is 36,000 words) fall into “a really terrible place, an anarchy-ridden literary banana republic called the “novella”. There is, he points out, nothing at all wrong with the novella, artistically speaking.

“Of course, there’s nothing wrong with circus freaks, either, except that you rarely see them outside of the circus.” [Writing in the Afterword to Different Seasons]

The problem is that the things are practically unsaleable – something I’m all too aware of, having just written a 32,000 word novella of my own which is kicking around while I try to decide what to do with it.

The demise of the novella as a commercially viable form is sad – and probably foolish too. I’ve read too many books recently where a perfectly decent 35,000 word story has been padded out to make a 70,000 word novel which really hasn’t been very good. Also the growing popularity of e-books and the increasing demand for instant entertainment, which can be consumed and enjoyed at one sitting, means that there is surely a market for these things, if only online.

Fortunately, Terry Tyler publishes independently, so she doesn’t have to worry about whether her books are “commercially viable” or not. As a result, Round and Round is out in the world, available on Amazon for just 99p.

Tyler’s heroine is Sophie Heron. She’s heading rapidly toward her 40th birthday and realising that she doesn’t really love her husband, Chris. Where did it all go wrong?

The answer, she decides, is that it was when she was 24 and got four Valentine cards. One was from Chris. She chose him, and now she is sure that was a mistake.

Thanks to a little magical realism, courtesy of her dead aunt Flick (clearly some sort of witch, but the good kind), Sophie is able to discover what her life would have been had she chosen each of the other three.

I won’t spoil the book by telling you what happens. It’s a lightweight romance well-suited to its 32,000 words. In fact, I think it could have been a little shorter. The setup (the 24-year-old Sophie has gone on a miracle diet and suddenly become irresistibly attractive to men) is longer than it needs to be. I’m happy to know that she has four suitors – I don’t need to know how she got there. Once we’re into the story proper, it bowls along and, rather to my surprise I find myself caring about Sophie’s choice. It’s never going to be (like the other Sophie’s Choice) a major novel of ideas, but Tyler’s prose, which is consistently smooth across all her books, makes it a really enjoyable way to spend a long train journey.

There’s a lot more to the story, too, than meets the eye at first. Is there really The One waiting for us if we can only sort out our lives? Or is there another one along just behind if we mess up the first time? How much of our life-long happiness is based on just luck, and how much is down to our own efforts? As Sophie sees how life might have panned out if she had chosen differently, she discovers that not only her life, but those of the men she knew, can change for better or worse according as to the partners they choose – or who choose them.

I’ve read many much more “serious” books that have made me think about life less than this one. My own unfortunate Beloved has heard so much about it she’s threatening to read it herself. She’ll probably enjoy it. So will you.