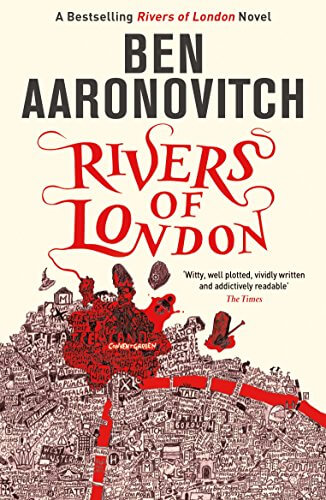 I have only kept in touch with one person I was at school with. It turns out that he is an extraordinarily good copy editor, so now he has been raked in to read all my books before they are released on the public. Just remember that if you keep in touch with old school friends, one day this could happen to you!

When he read Something Wicked he asked me if I had read Ben Aaronovitch’s Rivers of London. When I told him that I hadn’t, he said that Something Wicked reminded him of Aaronovitch’s book so I had a look at it on Amazon. What I saw made me very pleased I could honestly say I’d never read it, because there was definitely more than a passing similarity in the opening pages and I didn’t want people to say that I had copied his approach. It’s a humorous urban fantasy which combines a police procedural with things that you would never expect to see in Dixon of Dock Green. (Younger readers: ask your parents. Or Google it.)

Last week I got round to reading the rest of the book and it’s rather wonderful. And, yes, there are definite similarities to Something Wicked. Perhaps Aaronovitch’s familiarity with the supernatural (the story does suggest quite a lot of research) means that he read Something Wicked and then moved back through time to write Rivers of London. (Not an entirely original thought: I recommend Morley Roberts’ story The Anticipator.)

Like Something Wicked the story starts with the discovery of a body that has been the victim of an unusual murder. In this case it has been decapitated. There follows a lot of detail of police procedure but the appearance, fairly early on, of a ghost as a witness to the crime suggests that things are going to get very weird very quickly. While my detective finds himself working alongside Chief Inspector Pole, a vampire from the mysterious Section S, our hero here, Chief Inspector Nightingale, is a wizard working for Economic and Specialist Crime. Pole and Nightingale share a preference for working alone from their homes and both seem to take an unhealthy interest in mortuaries, but while Pole’s brief sticks to the vampiric, Nightingale covers all the ghosties and ghoulies London has to offer – and Aaronovitch’s research has turned up more strange things than Nightingale can shake his mysteriously powerful silver-topped cane at. To be honest I got a bit lost in the ghosts, the genii locorum, demons, revenants and assorted other phantasmagoria. It’s a complex plot (and the first of a long series) but it makes sense as you read along, though I must admit to waking up at 4.00 am worrying at some of the details. It doesn’t matter, really. Our narrator is a probationary constable whose natural curiosity and somewhat eclectic skill set was unappreciated by the Metropolitan Police generally but fits right in with Chief Inspector Nightingale. He’s a beautifully rounded character, whose constant amazement at the world he finds himself in massively helps us suspend our disbelief. “Of course he’s being possessed by a revenant,” I found myself saying. “Good heavens, man, isn’t it obvious?” And obvious it somehow became, however barking mad the characters, the plotline and the twisted logic. It’s helped by a wonderful sense of place, with lots of details of London geography that pin it firmly to reality (though how he managed to put Teddington Lock downstream of Richmond I have no idea – a careless copy editor, I suspect).

Above all the book is funny – often laugh-out-loud funny. It’s a wonderful mix of horror and humour and glorious British eccentricity at its best. I do recommend it.

And when you’ve read it, do you think you might like to take a peek at Something Wicked? Proof, if proof were needed, that two authors can independently turn up with the same idea. Unless, of course, Aaronovitch has read The Anticipator and figured out how to work that trick in real life. Actually, given his familiarity with magic, perhaps he has.

I bought Rivers of London for Kindle: https://www.amazon.co.uk/dp/B004K1EC1S

Something Wicked is available as an e-book or in paperback: https://mybook.to/Something_Wicked