Journal of the covid years: our first social gathering 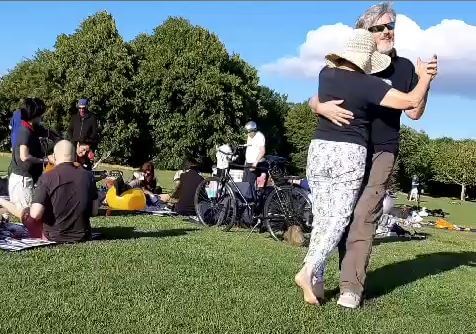 June 2020 and it’s been over three months since we’ve seen our friends who we would usually see every week. With restrictions on outdoor gatherings lifting, we could finally meet up. We were excited.

The event of the month – the summer solstice picnic in Regent’s Park on Saturday. The first return of music and dancing and socialising.

I studied the map and packed food and worried about clothes all morning. At 2.30 we set off on our bikes for the 1.5 hour ride into town. Yep – we are getting used to this. And cycling through Hyde Park on closed roads was great. London looked excited and buzzy. Lots of picnic-ers and birthday balloons and cyclists and rollerbladers. Even a game of roller hockey by the Albert Memorial as we passed.

The problem came in finding our group in Regents Park. Our instructions said “by the hub near the camels” – which we struggled with when faced with a huge open area, covered with groups of thousands of Londoners meeting up for the first time. I found T, ultra-excited (“I’ve missed this so much. It’s been lonely on my own”) and we wandered the zoo perimeter until we found and L and B putting up a gazebo. Soon we were a large group of at least 20, ignoring all Government guidelines about who can sit with whom, which would be far, far too complicated to understand, even if we cared.

Our host finds it impossible to greet people except with a kiss. Tom and I jumped away, but then compromised with a handshake (Tom) and hug (me). I put my satsumas and tea cakes on the shared food blanket, and looked awkwardly around, wondering how this socialising business was meant to work.

I spent a long time chatting to L. She and her husband have spent time filming funny videos and putting them online. She talked about her two-hour walks, finding routes from one park to another that she has never done before. Her daughter and mother live nearby, so she has kept in touch. But underneath was a huge seam of worry about the collapse of her business.

L is meticulous about her tax returns, so she has been getting 80% of her net earnings for last year (before things really took off). But that’s net earnings, and she is still repaying business loans. “We’ve coped, but we’ve had to think about things differently. We had to worry about whether we can afford to fill up the van with petrol, which we have never done before.”

By now, even Tom was talking to people. Someone produced a violin and someone else had a guitar and people were dancing barefoot on the grass. Tom and I discovered that if we put on our tango shoes, we could just about manage a pivot on the artificial strip provided for a cricket pitch. Then the bandoneon came out. “Last time we played music here we were fined”, our host said. But now the park police had given up. Tom and I ate the wraps we brought, and the shared stuff on the blanket, and soon it was 8pm and I needed to get home before it got dark.

I cycled back through an idyllic London, past crowds on Parson’s Green and Barnes Common, watching cars turn on their headlamps in the long, long summer’s evening. A minor incident on Putney Bridge when I crossed two lanes of traffic and got an angry honk. Otherwise, I was fine until I turned into our road and realised I was absolutely, totally knackered. Crawled up the stairs to bed.