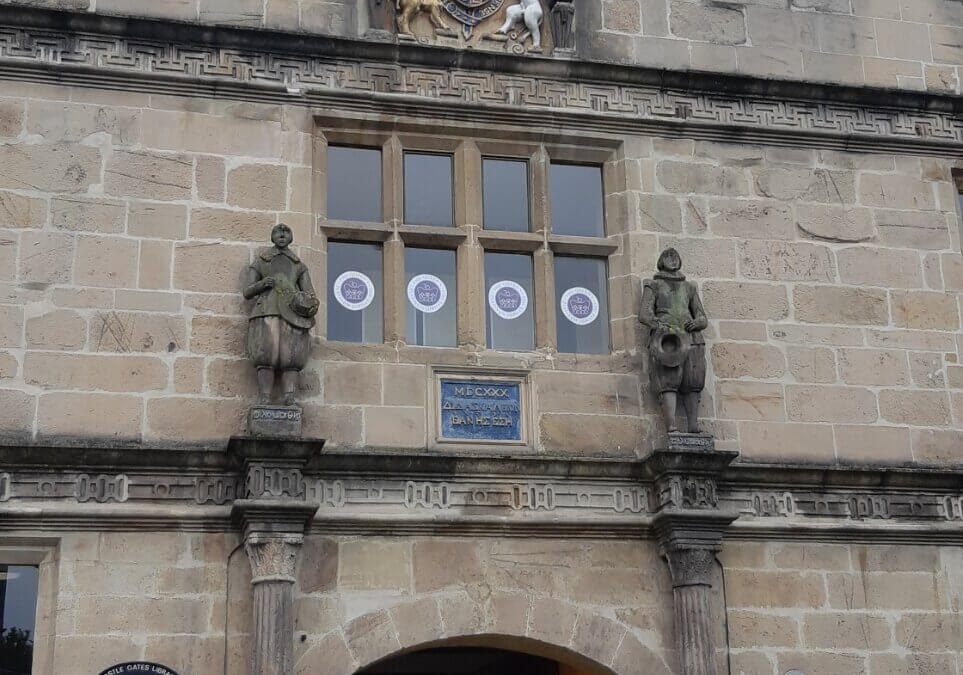 If you follow me on Twitter, you’ll have seen that Tammy and I spent a couple of days in Shrewsbury last week. It’s somewhere that we have been meaning to visit for years and we have finally got round to it.

Like so many people, I was attracted to the place by reading about the medieval town in Ellis Peters’ Brother Cadfael stories. She describes the abbey at the foot of the town and the castle at the top so well that I wanted to see them for myself. There are still bits of the abbey and the castle standing but, to be honest, not much, though both are worth a visit. We started with the castle. Apart from a tiny bit of wall at the entrance, all that is left of the medieval castle is the Great Hall built by Henry III in the 13th century.

It’s been chopped and changed a fair bit since, with an extra floor added and internal partitions put in and taken away. It was, for a while, a private residence but the 20th century saw it purchased by the Shropshire Horticultural Society who tried to restore the Great Hall to its original appearance. This included putting in not one but two minstrels’ galleries, because everybody knows that 13th century Great Halls had minstrels’ galleries. (They didn’t.) Overall, though, the building is in remarkably good shape.

As you can just about see in the photo the ground floor (where all the light is) is now a museum celebrating the history of the Shropshire regiments. It’s an unfashionably unashamed celebration of the Army with more red coats than I have seen in a while, plus some unusual exhibits like a lock of Napoleon’s hair. (A Shropshire regiment guarded him at St Helena.)

Otherwise little is left of the castle. Even the Norman motte — the artificial high point that is usually the last thing to be lost in ancient fortifications — is but a shadow of its former glory as much of it slipped into the river below back in 1271, taking with it the wooden tower on its summit. The romantic tower that you see today is a 19th century folly.

At the other end of town the abbey, too, is a shadow of the building it once was. Henry VIII’s Reformation saw the destruction of almost all the Abbey buildings and even the great abbey church itself, once 302 feet (over 90 metres) long was truncated to serve as a parish church. What remains, though is splendid. The two lower arches in this photo are original Norman. (The top storey was added later.)

The only other parts of the Abbey to survive were a pulpit which had been part of the refectory so that monks could have the gospels read to them as they ate (and which was saved as it made an attractive garden ornament for the man who bought the land to build on) and a hall for sheltering travellers. The hall features a lot in the Cadfael stories as travellers often drive the plots, so I had to photograph it, however unimpressive it looks.

The Abbey and the castle may be shadows of their former selves, but the town in between is astonishing. Built in the loop of the river there has been no room for urban sprawl or even any major redevelopment and much of the original mediaeval street system and a remarkable number of the buildings still survive. What distinguishes Shrewsbury from many other historic towns is that the ancient buildings have been pressed into use for the 21st century. So the beautiful old market hall (pictured below) contains a cinema upstairs in the late 16th century building.

The public library is housed in Shrewsbury School, which was founded in 1550. (That’s it at the top of the page.) As a school it, of course, had its own library and the idea that people are still using the building for at least part of its original purpose seems to me to demonstrate a much better understanding of “heritage” then all those buildings that we have carefully sealed away so they can be enjoyed as museums. Some of the library’s rooms are spectacular.

In Shrewsbury, most of the buildings aren’t museums unless, of course, they are the local Museum and Art Gallery, which incorporates 13th-century Vaughan’s Mansion, one of only a handful of early medieval defensive hall houses remaining in the UK and a 19th century music hall.

There was a lot to see in just two days and we took time to visit Wroxeter Roman city as well. Once the fourth largest city in Britain, it’s now basically a single wall (known as ‘The Old Works’) in a field but the archaeologists have worked their magic and the place was definitely impressive. As the Romans would have said, though, Sic transit gloria mundi.

So there we are: several decades after I first said, “We ought to visit Shrewsbury,” we did and it was very, very good. I can recommend it. We stayed in The Old Post Office, itself an amazing old building in the centre of the town. If you have a couple of days to spare, you could do a lot worse.