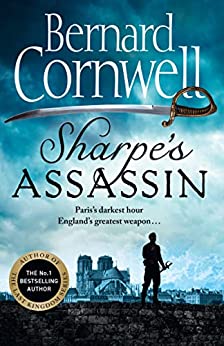 So how do Sharpe’s exploits compare with Burke’s?

Cornwell’s creation is first and foremost a soldier and Sharpe’s adventures follow him through Wellington’s military successes from India to Waterloo. His fans love the military detail in the stories and the scenes of action, whether Sharpe is brawling with an individual or part of an army engaged in a historic battle. This story is set after Waterloo, so the possibilities for military set-pieces are limited. Even so, Sharpe’s approach to saving the spy from the fortress focuses on a brute-force military approach. Burke and Sharpe both use cunning to infiltrate the fortress, but where Burke’s approach is designed to slip out quietly with as little fighting as possible (though things don’t work out exactly as planned), Sharpe, having won past the first gate, goes for a straightforward military assault. It means Cornwell inventing an action where there wasn’t one but it does mean Sharpe can get in a small battle early in the book. Sharpe is, after all, not about subtlety. The story has him working alongside a rather foppish spy who is all about subtlety but is all-too-easily fooled by the Bonapartists. Fortunately he has Sharpe watching his back and cheerfully blasting away at the French at every opportunity.

There’s an attempt at blowing up a dinner being held by the victorious British (very similar to one of the attempts in Burke at Waterloo) and Sharpe, like Burke, foils it. Like Burke, he fails to stop the villains escaping, setting things up for the final conflict which, again, involves lots of troops in a firefight with some artillery and the odd Congreve rocket to liven things up. Burke would, I suspect, find the outcome messy, but Sharpe ends up seeing off the Frenchies and disrupting their evil plans. The Duke is saved and peace finally comes to Paris.

By the end of the book, Sharpe is living peacefully in Normandy with his lady love. Burke gets no such happy ending. The real James Burke continued to spy for Britain long after 1815 and there is no sign of an end to war for him. I suspect we may see more of Sharpe in time, too. I wonder if he will ever decide that there are problems not best solved by bloody violence. Probably not. The world needs men like Sharpe as well as men like Burke. Long may they both thrive.

Amazon provides a platform that is happy to host both a famous author like Bernard Cornwell and a significantly less famous one like me. Sharpe’s Assassin is available on Kindle at £4.99 or in paperback at £4.50 (it’s on offer). It’s an interesting pricing policy and explains why traditional publishers claim that e-books aren’t doing that well. It’s because they deliberately over-price them. The paperback is a bargain though.

My own tiny publishing effort can’t afford to subsidise paperbacks so I’m afraid Burke and the Pimpernel Affair and Burke at Waterloo will both set you back £8.99. (Printing isn’t getting any cheaper.) On the other hand, I do pass on the savings that come with e-publication, so the Kindles cost just £3.99.

At these prices, why not sort out your Napoleonic spy escapade needs for the rest of the month and buy all three?