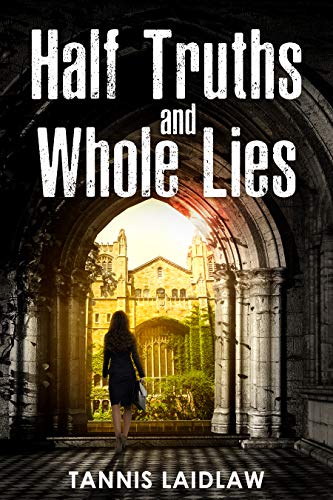 Every so often I “buy” a free book on Amazon which is being promoted in the hope of getting some reviews. If I read a book like this and I like it, I feel that I really should review it. That’s only fair, isn’t it? I hope you do the same.

Anyway, the latest random book picked up like this was Tannis Laidlaw’s ‘Half-truths and Whole Lies’. Here’s the review.

Sophie Rowan has left an American university to lead a research project at a prestigious medical school in London. There she discovers, to her amazement, that her professor takes credit for the work done by other researchers on her team.

This is an enjoyable tour of an aspect of academic life that anyone who has worked in a university (I’ve dabbled and my wife has worked as an academic) will recognise. The evil professor in this case is more blatant than most, simply plagiarising her students’ theses and publishing them under her own name, but I am surprised that Laidlaw’s protagonist is shocked to learn that professors don’t always properly credit work done by others in their departments. (I hasten to add that the academics I’ve worked for have been generous with credit, but this is far from a universal experience.)

Sophie Rowan’s journey from dewy-eyed innocence to an understanding of just how Machiavellian university politics can be makes for an excellent read. At the same time as she is learning the realities of academic life, she is also exploring her new home in London. As a Londoner, I enjoyed seeing my city as experienced by a foreign visitor. Sophie Rowan’s London is well observed and it is clear that the author, too, has seen London as an outsider. The confusion that Sophie feels when offered “nibbles” is just one example of the fun that Laidlaw has with this.

This is quite a layered book. Sophie has rather a busy back-story and she has to sort out family issues and her love life as well as deal with university politics. There’s so much going on it’s easy to get very involved with the character and I did enjoy the story. As it goes on, and the evil professor is revealed as a sexual predator as well as a plagiarist, things get a bit melodramatic, culminating in a stand-off between somebody who can be legitimately described as psychotic and somebody who shows many of the attributes of a psychopath. A butcher’s knife features. It’s a slightly rushed and over-the-top ending which I found a bit unsatisfying, but those who want to see good triumph and evil carted away in handcuffs should enjoy it.