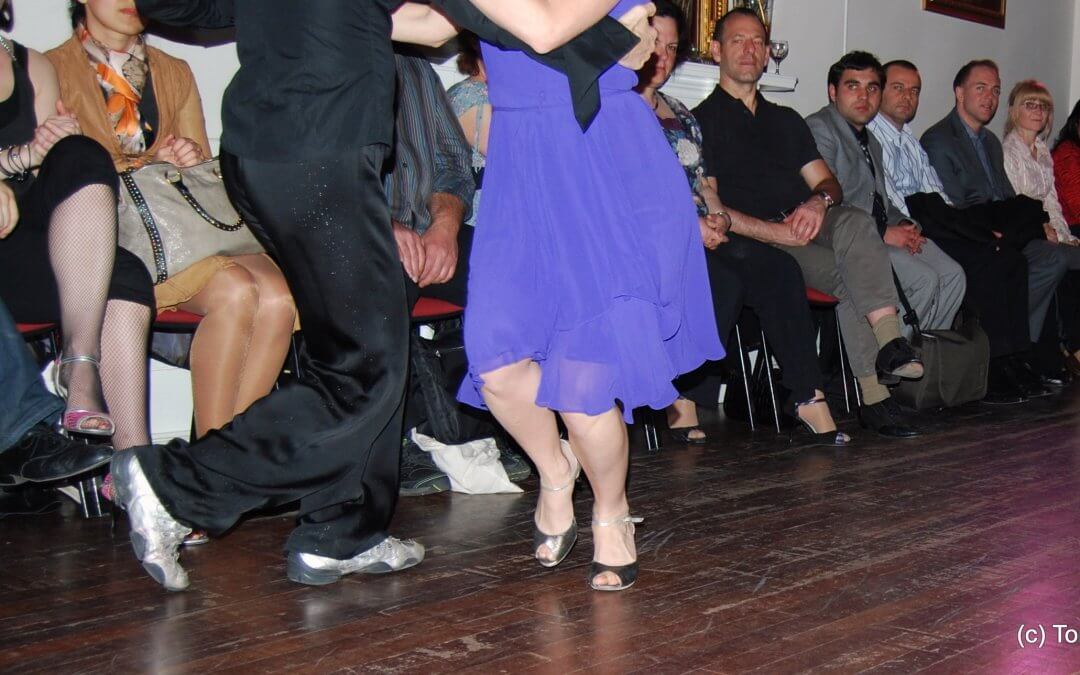 I haven’t blogged about tango for a couple of years now, though it does feature pretty regularly on my Twitter feed. As January is the time of year that people decide to take up a new hobby, I thought it might be a good week to post about the way I seem to spend so much of my time.

The social dance for unsocial people

Somebody said that they had a friend who was put off learning to dance because they weren’t very confident in social situations. Tango is the perfect dance for them! If they are anything like me (and many others who struggle with large groups) they will find social situations difficult because there is so much going on. (Extraverts can skip this bit.) You have to cope with all these unwritten social rules, know how to say the right things to the right people, have a supply of acceptable small talk and be able to laugh at unfunny jokes. Tango gatherings are so much easier. There are rules, but they are simple and easily learned. Conversation can be avoided by suggesting that it would be nice to get on the floor (it’s not just acceptable not to talk while dancing, but often considered best practice) so there is no need for small talk or the ability to laugh at anybody’s jokes. For introverts, tango is ideal.

There is the little business of learning how to do it, which can take a while. Women can pick it up easily, because most women choose to follow rather than lead and, at least when you are starting out, following is quicker to pick up. For men, learning can be hard work but with a good teacher you should see visible progress quite quickly. Finding a good teacher can be tricky. There are lots of teachers (even I teach occasionally) and some are noticeably better than others. My own teacher is Alexandra Wood (draw your own conclusions). Try a few introductory classes (a lot of teachers offer your first group lesson free) or ask around among dancers you know, either in real life or on social media.

How it’s good for you

What are the benefits? Well, even the most grumpily asocial character benefits from human contact. Psychologists report that hugging is good for your physical and emotional well-being. (See, for example, this article in Psychology Today.) Tango is a dance built around the embrace – it’s essentially walking while hugging your partner.

There are lots of reports that tango is associated with improvements in mental and physical health. In particular, tango is often linked to lower levels of dementia in old age. In Argentina, several hospitals offer tango lessons to people suffering from Alzheimer’s and Parkinson’s. It doesn’t cure these diseases but it can relieve the symptoms. There’s an excellent (and moving) radio programme about using tango to help people with Parkinson’s on the BBC Radio website.

Tango improves posture. A good teacher will start by working on your posture and I have seen dramatic improvements in the way people carry themselves, which stretch well beyond the dance floor.

The sort of exercise that tango provides – low impact steady exercise over a long period with just short breaks between dances – is ideal for improving cardio-respiratory health. Anyone who thinks dance is for softies should watch a dance off between professional dancers and pro sportspeople as I did once. The dancers were still moving long after the sports professionals had given up. (The only ones to come close were skiers, which justifies my choice of sporting activity.)

It opens up a whole new world

I remember complaining that at school I was forced to study the geography of South America which, I said, was surely the area of the world that I was least likely to ever visit. Since I started tango I have made seven trips to Buenos Aires as well as dancing in Iceland, France, Portugal, Romania, and Turkey. I’ve even tried to learn Spanish (to the despair of Spanish-speaking friends who can’t believe anyone could be so bad at picking it up). Even without mastering the language, though, I’ve discovered the joys of Argentine art, literature, and film and TV, all of which are impressive. And, of course, I discovered James Burke whose first adventure, Burke in the Land of Silver is closely based on the real-life adventurer and his exploits in South America.

I have met lovely people from all over the world through tango. It starts as a way to have a few dances once or twice a month and ends up as the opportunity to dance once or twice (or more) a week with an ever-growing group of friends who you may well end up going on holiday with or more. A few people I know have married their dance partners though, contrary to what a lot of people think, I really can’t recommend it as a way to find love. But maybe that’s just me (though it certainly helps keep the flame alive in my relationship).

Perhaps, of course, you are a socially confident, terrifyingly healthy, well-travelled, cultured individual already. In which case you could just take it up because the music is fantastic and the dances are fun.

It’s the start of a new decade. Try a new passion.