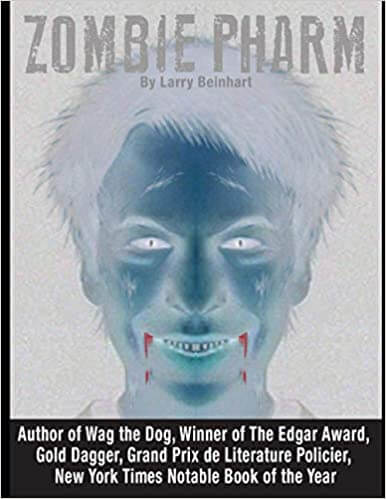 I’m always interested to read how other writers approach things I’ve just written (or am writing) about. So I was fascinated to see Loren Estleman tackling the idea of anti-Napoleonic agents in Paris because that’s exactly what’s going on in the next Burke book. And now I can look at how a well-established author updates a traditional fantasy genre to make it work in the “real” world. In Something Wicked I took a new look at vampires so that we could imagine them living “normal” lives in London (and dancing a lot of tango, as it happens). Larry has created a thoroughly 21st century monster but one that behaves exactly like traditional zombies. I think he’s made it work.

There’s a not particularly subtle (not at all subtle really) sub-text that comes from a clearly left-field political perspective. It will put off some readers but I enjoyed it. Big business is bad and pharmaceutical companies are not to be trusted. Larry’s targets range across underfunded police departments, private military contractors, the war on drugs and dumping toxic waste in third world countries but they do all come together to create ‘the School of Tomorrow’. Here children are fed behaviour modifying drugs to produce perfect high-achieving pupils taught by staff who have been similarly pharmaceutically “Optimized”. All goes well until the drugs are polluted with poisonous run-off from a toxic waste dump (I told you it all fits together) to produce children with massive cravings for more drugs (I told you it wasn’t subtle). Once they’ve taken all the pills, they start trying to extract the drugs from the bodies of teachers and others who have them in their blood stream. Yes, these are now zombie children! All locked in a school!! With just a few drug-free individuals trying to save them!!!

It’s every zombie film you’ve ever seen. Bits are hilarious, much is gross. There’s zombie sex (not very good sex, but I guess that figures), spectacular amounts of violence, stupid policemen, clever stoners and evil businessmen trying to work out how to make money out of it all. The set-up is an enjoyable read and the climax had me so hooked I missed my Netflix fix. Personally I felt the middle act was perhaps a tiny bit over-extended, but then I’ve never been a huge zombie fan. There’s only so many shuffling creatures cornering people and ripping them apart that I can feel invested in, but lots of readers will love it. The fact that the evil zombies are often small children does give it a slight edge: they’re more likely to bite your calves than your neck and when people start retaliating it turns out you can throw a small child quite a distance. Definitely not a book for those of a sensitive or nervous disposition.

So does it work? Clearly I thought it did. Larry is self-publishing this, because despite his record as a best-selling author (Wag the Dog, No One Rides For Free) traditional publishers were unenthusiastic, so Larry has self-published this. I think it will do well: clearly reimagining traditional fantasy tropes is where this genre is at (he says, hoping to see a spike in sales of Something Wicked). Seriously, this book deserves to do well. It’s a great read and just £3.50 on Kindle.

Apparently this genre is called ‘Urban Fantasy’. Who knew? Certainly not me when I started writing it.

If you enjoy this sort of thing, can I point you at Something Wicked? I may have mentioned it once or twice already, but reviews suggest it is good. Vampires hanging out in the sort of tango clubs I hang out in, just trying to get by in a world they think might not be too happy if we all knew their lifestyle choices.

I’ve also written a novella, Dark Magic about a troupe of stage conjurors whose act is getting a little diabolic assistance. It does not end well but you will laugh. Surprisingly (and satisfyingly as far as I’m concerned) some people said it was genuinely scary as well as funny. No zombies, though – not even one.