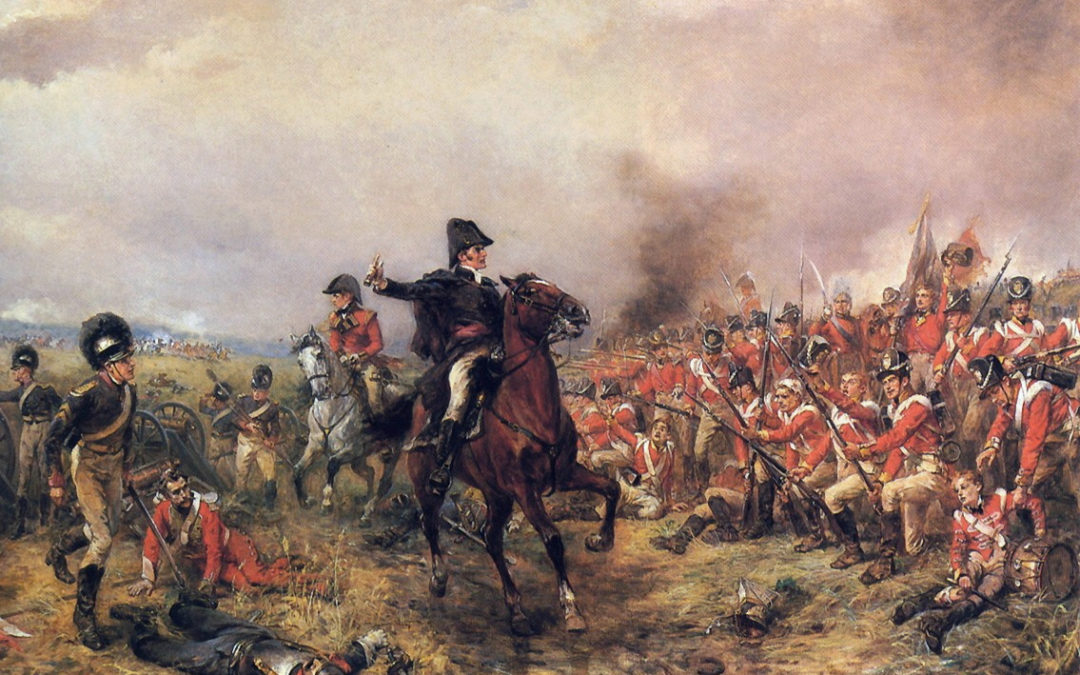 I mentioned in last week’s blog post just how small the field at Waterloo was. Marshall-Cornwall writes that Wellington’s front extended 4,000 yards (so around 2¼ miles or just over 3½ km). Wellington’s famous despatch after the battle describes his position:

The position which I took up in front of Waterloo, crossed the high roads from Charleroy and Nivelle, and had its right thrown back to a ravine near Merke Braine, which was occupied: and its left extended to a height above the hamlet of Ter la Haye, which was likewise occupied.

Wellington had placed his army on high ground. It’s not that high, as you can in the photo below. This gives a bird’s eye view of the battlefield (from the Lion’s Mound). We’re looking toward the French lines and you can see that there is a definite slope for them to climb up, but it’s a shallow ridge rather than a steep hill. Even so, it was a wet day and the ground was very muddy, making the advance toward the British lines that much more difficult and dangerous, as every second that you spent on that slope you were exposed to their fire.

The picture below gives a better idea of the reality of that slope on the ground. The sign you can just see in the foreground says that this was the point at which the French cavalry attacked the British. In fact the British were probably a little further back from this, as we’ll discuss below, but it’s close enough. What you can see quite clearly here is that there is a dip in the ground beyond where the crop (sugar beet?) is growing. The cavalry would have charged up from that lower ground and, again, galloping through the mud would have slowed and winded the horses.

The French had taken up their position on a similar ridge facing the British, although in their case the ridge offered no real benefit as Napoleon chose to play an offensive game so his troops were soon moving ahead of his lines. Wellington, on the other hand, was fighting an essentially defensive battle. He did not put his troops on the top of the rise, but deployed them just the other side of the high ground, on what military tacticians call “the reverse slope”. This protected them from much of the French fire. Napoleon had started his career as an artilleryman and was usually very effective in his use of cannon fire. Battles started with an exchange of artillery but at Waterloo much of the French shot was wasted. The British were protected from direct fire by sheltering just below the rising ground. This would not normally have been too much of a problem for the French gunners, as cannon were usually aimed short of the enemy so that the balls would hit the ground and then bounce repeatedly, moving at just the right height to take out the maximum possible number of troops before eventually coming to rest. On that day, though, the mud again favoured Wellington. The cannon balls ploughed into the mud on the French side of the slope and stopped there. Relatively few balls bounced across the top to wreak havoc on the British lines behind.

Napoleon took up his post at the rear of his army near to the inn of ‘La Belle Alliance’ which was to become famous as the point where Blucher and Wellington would meet at the end of the battle. From Napoleon’s vantage point to the Allied lines was less than a mile.

Elizabeth Longford estimates that Wellington had 67,661 men against Napoleon’s 71,947. This means, she writes, that there was “a total of nearly 140,000 men and over 400 guns, not to mention 30,000 horses, all crammed into under three square miles.” At a time when battles could be fought across rivers, around mountains, and might include the odd town, this was an unusually small field for a major conflict. The result was that, although Waterloo was not a particularly awful conflict in terms of the absolute numbers killed, this three square miles was, by the end of the day, to be one of the bloodiest killing fields of the Napoleonic era.

Although the battlefield is small, there were two distinct conflicts within it (and, later in the day, a third, which we will come to).

Wellington wanted to hold strong points ahead of his line. He chose to place men in the chateau at Hougoumont on the right (west) of his line and at a farm called La Haye Sainte at his centre.

Wellington knew that he was outnumbered by Napoleon and, with his troops exhausted after the battle of Quatre Bras only two days before and a day’s marching in heavy rain, he did not have the strength he needed to take the fight to the enemy. He was relying on holding his line until Blucher could arrive with the Prussians to move the battle decisively in the Allied favour.

Wellington’s fundamental strategy, then, was hardly subtle. His men were to remain on the ridge line (or, for much of the day, sheltering on the reverse slope) and hold the line as Napoleon threw the French forces against them. If the British and Allied soldiers absorbed the French fire all day without breaking, Wellington was confident that the Prussians would relieve them and that the Allies would win. It meant a particularly brutal battle, but one in which, although there were to be individual acts of heroism, the reality for most of the Allied force was that they were to stand and take their punishment or die and fall at their posts.

Napoleon probably did not believe that the Prussians would arrive and may not have attached enough importance to the speed at which he had to gain the victory. He had initially planned to start his attack at nine in the morning but nobody was ready by then. Troops were still coming up from Quatre Bras and the ground was so sodden that the heavy guns were difficult to move. In the end, the battle did not commence until around 11.30.

Various authorities give different times for the start of the battle. Frankly, the idea that anybody knows exactly when it was is straightforwardly ridiculous. Even if people had looked at their watches at the exact moment of the first cannon sounding (and many probably did) the watches would all have given different times. There was no Greenwich Time signal and people would have set their watches to the sound of a church clock, possibly days earlier in Brussels. Watches could be quite accurate, but not as accurate as today and definitely not keeping good time if they had been worn by somebody galloping on a horse, as would almost always have been the case. So “around 11.30” will have to do and anybody who claims greater accuracy is kidding you.

Whether the battle started at 11.30 or up to half an hour later, the important thing was that Napoleon had wasted several hours that he could have used to pound away at the Allies – hours that would prove critical as the Prussians drew closer to the battlefield.

The first French assault was not a massed attack on the British centre. Instead they French force moved off to the left to attack the chateau at Hougoumont. The battle there was to continue all day and the defence of the chateaux has become, for the British, one of the defining incidents of Waterloo. We’ll look at just what happened there next.

There are thousands of books about this battle. The two I’ve directly referred to are:

There is a lot of detail about elements of the Battle of Waterloo Burke at Waterloo. (“A good general account of the battles described.” – Amazon review.) Burke at Waterloo is available on Kindle at a ludicrously cheap £3.99. If you enjoy my blog, you might consider buying it. mybook.to/BurkeWaterloo