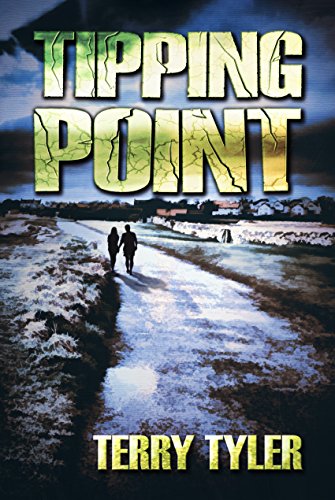 War, they say, is 98% boredom and 2% terror. I suspect that the end of the world, when it comes, will be much the same. This can pose a bit of a problem for a dystopian novelist.

Terry Tyler’s Tipping Point draws together several contemporary issues to make a worryingly convincing scenario for the end of the world. The population is growing out of control. The government builds up dossiers on people by spying on their social media feeds. When a virus is deliberately released in Britain, the poor, the unemployed, the sick, immigrants and political troublemakers are left to die, while useful citizens are vaccinated and survive.

That’s the plan, anyway. Almost inevitably, the plan goes wrong. The virus makes its way into the population before the vaccinations are completed and a pandemic more or less wipes out the population of Britain. There are suggestions it’s rampaging across the world, but with no communications, no TV, no Internet, nobody is really sure what’s going on anywhere.

Tipping Point follows the lives of a few of the survivors as they make their way through a landscape of burned-out villages, looted shopping centres, and abandoned towns. Everybody has to come to terms with the reality of life without electricity or running water. People band together and arm themselves in a world where order has broken down and the strong take what they can from the weak.

There are some nice touches. The whole thing, it is suggested, was an American plot. The virus was first released in Britain, with British government consent, because the islands provide a convenient area for a field test. (That seems to nail the special relationship more accurately than many more overtly satirical books.) There is the social media app that has been set up to guarantee your privacy that is owned and run by the government who access all of it. The plan eliminates the intellectual and scientific classes as well as the poor and useless because, as one character conveniently explains, “We want the worker bees. Mr and Mrs Average, of commonplace intelligence, who – if they ever stopped to think about it, which they don’t – know that society works best when the masses take direction from the few, without question, and everybody knows their place.”

The main insight, though, is that life after the apocalypse is, once you have survived the immediate conflagration, extraordinarily dreary. Survivors raid toy shops for board games, unable to play on their computers. With no TV or video, they are reduced to reading – and reading real books, rather than Kindles.

Anybody who has read Terry Tyler’s Twitter feed will know that she is a big fan of The Walking Dead and Tipping Point sets us up nicely for the zombie apocalypse (people even refer to it in conversation) except that there are no zombies. The result is that, despite a large cast of characters – nicely defined and easily kept track of – there is really not a lot happening.

Terry Tyler writes very readable and pleasant prose, which makes it easy to carry on despite a lack of incident. When exciting things do happen (escaping through a checkpoint, fleeing a would-be rapist) the story rattles along and the underlying ideas are genuinely interesting, but every 50 pages or so I find myself agreeing with the characters that life after the apocalypse is really, really dull.

The book is the first of a trilogy and by the end of Book 1 different characters – the good, the bad, the ditzy and the borderline psychopathic – have all independently decided to flee to Lindisfarne. It wouldn’t be my choice of refuge, but I’m not writing the book. Volume 2 may well see more incident. But in the end, there’s not that much that can happen. Most people are dead and those who are left are battling to cope with the day-to-day business of survival. It’s 98% boredom and, though Terry Tyler’s writing isn’t boring, I can’t help wishing there were zombies …