‘The Gilded Lily’ by Deborah Swift 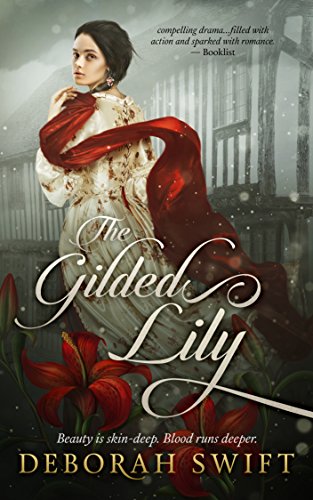 I recently came across an old blog post by Deborah Swift on “Subtlety and Melodrama in Historical Fiction”. She explains that melodrama can slip in when the action becomes too fast paced. With historical novels one solution that she suggests is to “remind myself of the reality of the world I’m writing about”. It is the research, and the context in which the drama happens, that roots the story in reality and prevents the melodrama from getting out of hand.

It’s an approach that is very clear in The Gilded Lily. Ella and her younger sister Sadie have fled Westmoreland where Ella has robbed her dead master. (How involved was she in the death? It’s not at all clear.) They make their way to London where they soon discover that the money they have stolen is hardly enough to keep them. Their dreams of living as fine ladies meet the reality of life for young women in the mid-17th century city.

Deborah Swift certainly follows her own advice to root herself in the reality of the world that she is writing about. The book accurately reflects the dreariness and misery of life for the working classes of the time. The sisters first find work in a wig factory, their fingers constantly cut as they pull the threads through the hessian of the wigs, their necks and arms stung as their overseer lashes at them if she sees them lift their heads from their work. It’s an excellent historical account, but the drab monotony of their lives can’t help but rub off on the reader. Despite interludes of excitement when they think that their crime in Westmorland might be catching up with them, it can (despite Swift’s easy writing style) be a long and sometimes difficult read.

Eventually Ella, the more daring of the two, finds work with the distinctly suspect Jay Whitgift, the son of a successful pawnbroker. Ella has hopes of winning Jay’s heart and hence finally escaping from the drudgery of daily life and becoming a respectable woman. It is a measure of Swift’s skill in summoning up the period that we never for a moment think that she will succeed. Other novelists may give us girls who marry rich men and live happily ever after, but Swift is too firmly rooted in the reality of the 17th century to let us believe for a moment that this will not end badly.

It ends extremely badly indeed. True to the approach that she outlined in the blog post, Swift uses the solid historical background of the story to allow her to leap off into something that, without such careful preparation, could easily be completely over- the-top melodrama. Instead, I was gripped as a story of two poor girls making their way in the city turned into a tale of white slavery, murder, arson and a dramatic finale at the Frost Fair held on the frozen Thames. Suddenly I was turning the pages enthusiastically wanting to know if Ella could escape Jay’s murderous plan or if Sadie was indeed condemned to starve, literally locked in a garret.

The Gilded Lily offers an outrageously exciting story in a beautifully detailed period setting. If the beginning seems a little worthy, it’s well worth sticking with.