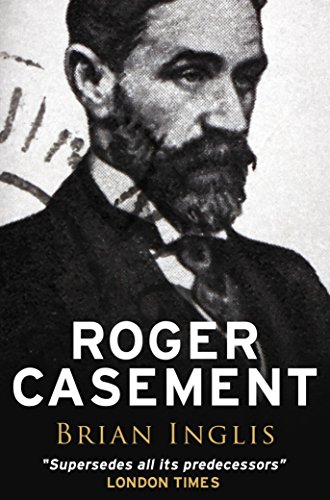 Lately I’ve been writing about events in the run up to the Irish Rebellion of 1798, so when I saw a biography of Roger Casement on a free promotion on Amazon, I “bought” it. The events of the Easter Rising of 1916 clearly followed on from the failed revolt of 1798 and had many similar details. I thought it would be interesting to read the life of somebody so intimately concerned with the 1916 uprising and compare their life with, for example, the life of Wolfe Tone, the famous 18th century Irish Nationalist (and incidental character in my book).

The end of Casement’s life did have remarkable similarities to Wolfe Tone’s. Like Tone, he was born a Protestant. He, too, quit Ireland to live in a country at war with Britain in the hope of persuading Britain’s enemies to assist a rising of the Irish. Like Tone, he was received sympathetically and there were many indications that assistance would be forthcoming, but, like Tone, he discovered that, in the end, Britain’s enemies saw Ireland as unworthy of any significant military effort. Like Tone, he saw the rising against the British as doomed to failure and, again like Tone, he placed himself in a position where his capture, and ultimate death, was almost a certainty, preferring to die in Ireland than live on in exile. (Sadly, Casement was executed in England and for many years his body lay in Pentonville, until it was returned to Ireland, where he was reburied as a national hero.)

Casement’s earlier life, though, could not have been more unlike Tone’s. He was born in Ulster, but after he had left school his uncle got him a job in Liverpool with a shipping line. He persuaded the company to let him go on a trip to Africa and was so impressed with what he saw that he decided he must return. When he was just 20 he started working for Stanley. This was the start of an involvement with Congo that was to define much of his life. At the time, Leopold of the Belgians was exploiting the Congo natives to harvest rubber from the jungle. The natives were treated as slaves and frequently abused and tortured. Casement believed that the European countries had a duty to develop the economy of Africa in the interests of the local people and started campaigning against Leopold’s cruelties.

That one sentence summary of Casement’s activities in the Congo grossly simplifies what is the theme of about the first third of the book. Casement’s activities in the Congo were often the stuff of “Boys Own” adventures and Inglis’s writing style carries you with it like any historical thriller, despite occasional jolts because of what seem to be typographical errors. These can be confusing, as (as with any biography) Inglis uses a lot of quotations from contemporary reports, letters to or from Casement, etc and these are frequently not set off from the main text, so that you can read a paragraph without realising that this is no longer Inglis, but somebody completely different. This does lead to a certain amount of doubling back, which can take you out of what would otherwise be a gripping story. Even so, I belted through the account of Casement in the Congo and felt that, by the end, I knew much more about a particularly shameful episode of Western colonialism than I ever had before. I can just remember from my childhood the horrific legacy of Belgian rule in the Congo working itself out in wars and revolts, the echoes of which resonate down to the present day. This is the first time, though, that I have ever known how these problems started and this, on its own, would make the book worth reading.

Casement’s success in improving the lot of the Congo natives led him to attempt a similar intervention on behalf of the natives of Putumayo in the Amazon who were being similarly exploited by the Peruvians. He was less successful this time, largely because of a failure by the Foreign Office to pursue the matter with any vigour. Even so, his adventures in the Amazon are, again, nothing if not an exciting read.

Throughout Casement’s adventures there is what, in a novel, would be a subplot about his promiscuous homosexuality. So outrageous that they are at times genuinely comical, Casement’s sexual adventures were not funny at a time when homosexuality was illegal. Casement himself saw his sexual predilections as a personal failing and the stress of living with this secret may have contributed to what Inglis suggests was quite severe mental illness later in his life. The publication of some of the more torrid parts of his diaries after his death go some way to accounting for the fact that Casement’s considerable achievements are not as well known in England as they should be.

Of course, the fact that Casement was hanged as a traitor has also damaged his reputation. The homosexuality does seem to have been a significant factor, though, as by today’s standards he was definitely a freedom fighter up there with Nelson Mandela. If you think this must be an exaggeration, I can only suggest you read some of the fulsome praise of his character produced by supporters at the time. His behaviour was certainly no more treacherous (and arguably much less so) than, say, that of Gerry Adams, a man who England seemed quite capable of doing business with.

It was Casement’s involvement with the Easter Rising that drew me to the book, but in the end it was the least interesting part of it. There is an enormous amount of detail on the infighting between the various Republican parties that bedevilled the movement for Irish independence and continues to wreak havoc in the North. For those of us sitting comfortably distant in London, the detail of who is on whose side when becomes almost incomprehensible. Interestingly, in another parallel with Tone’s life, Casement spent much of his energy is trying to bring the squabbling factions together.

Casement’s adventures in Germany are a sad tale of growing disillusionment. Having read Tone’s account of life in France, there are, again, strong parallels. In the end, Casement realised that the Germans would not provide military support to any uprising and that an attempt at a coup against England was doomed. He returned to Ireland hoping to prevent an action that he knew would kill many Nationalists without any prospect of victory. Ironically, his return was used by the English as evidence of his involvement in the uprising and he was hanged. It’s a desperately unhappy end to a remarkable life.

Inglis’s biography verges on the hagiographic at times. Unfortunately, he feels the need to quote extensively from Casement’s poetry. Casement was not a great poet and these outbreaks of versification do not improve the book. Frankly, I’m not sure it’s improved by all the quotes from Yeats either, but Yeats’s skills as a poet are more generally acknowledged. Overall, though, this is a surprisingly readable account of the life of a sadly underrated man who deserves the recognition in England that he does get across the Irish Sea.