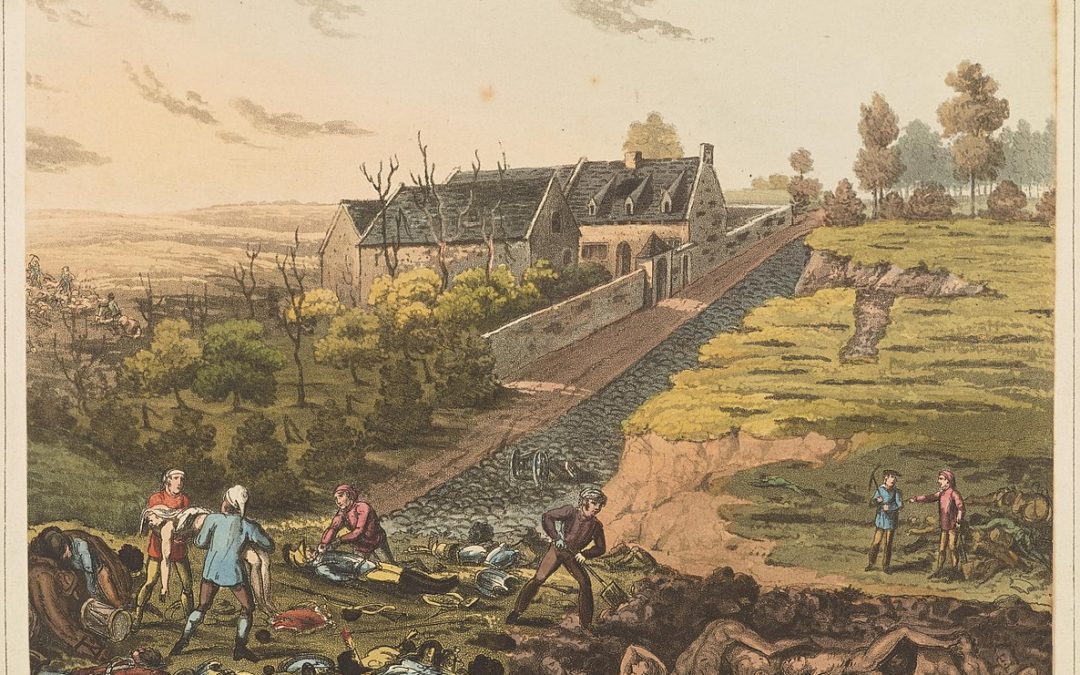 Last week’s blog looked at the way that the wounded at Waterloo were treated. We saw that many were left for several days on the battlefield and even once they had been taken off the field for treatment conditions were harsh and most died. It’s worth remembering that when we read about the numbers of deaths in battles of this era these are the numbers of people who died on the day. Actual casualties including all those who died of their wounds later were invariably much, much higher.

Even so, those who did get treatment were the lucky ones. What happened to everybody else?

Scavenging the dead (and the not quite dead)

Even while the last of the fighting was going on, scavengers were out to take what they could from the dead. By nightfall there were many scavengers working their way through the field. The accounts of survivors who spent the night wounded in the open are quite terrifying. Col Ponsonby of the 12th Light Dragoons was injured late in the afternoon and robbed by a French soldier during the battle:

A tirailleur stopped to plunder me, threatening my life. I directed him to a small side-pocket, in which he found three dollars, all I had; but he continued to threaten, and said he might search me: this he did immediately, unloosing my stock, and tearing open my waistcoat, leaving me in a very uneasy posture.

The battle over, he is then searched by a Prussian after plunder.

The groans of the wounded all around me became every instant more audible: I thought the night would never end.
It was not a dark night, and Prussians were wandering about to plunder… Several stragglers looked at me, as they passed by, one after another, and at last one stopped to examine me. I told him, as well as I could, for I spoke German very imperfectly, that I was a British officer, and had been plundered already; he did not desist however, and pulled me about roughly.

Soldiers were not well paid and the opportunity to plunder was definitely one of the perks of the job. Being plundered by people who were supposed to be on your side must have been a bit of a blow though.

It’s easy to take a censorious view of the civilians who moved onto the battlefield stealing anything they could. Many bodies will have been stripped naked – boots, especially, being much prized. You have to remember, though, that people living in the area will have lost everything because of the war. Their crops will have been trampled, their homes may well have been destroyed and anything valuable is likely to have been looted. The Prussians, in particular, were prone to kill livestock on French farms simply because they hated the French so much. In the circumstances, the only restitution that people were going to be able to get was that they took for themselves by stealing from the corpses.

A particularly macabre theft was that of teeth. In the early part of the 19th century, rich people with plenty of money but very few teeth were prepared to pay well for a good set of dentures. These were usually made from ivory but they did not always look natural. The best dentures were made with an ivory base and then set with real human teeth at the front.

Demand for human incisors far outstripped supply, making the theft of teeth from corpses on the Waterloo battlefield a lucrative operation. The number of teeth salvaged from the bodies led to dentures made with them being known as “Waterloo teeth”. Waterloo teeth were seen as more desirable than teeth from other sources as people knew they came from fit young man who had died suddenly from causes unconnected with disease. Given that some dentures were made with teeth recovered from bodies in cemeteries, the attraction should be obvious.

Dealing with the bodies

When we think of clearing bodies off the battlefield, we naturally start by thinking of the human dead, but a priority at the time was the horses. The corpses of horses are a more immediate problem as up to half a tonne of horse will rapidly swell with putrefying gases and poses a major health risk as well as smelling utterly disgusting. Where possible, horses would have been buried.

The bodies of the killed were all completely stripped in an incredibly short time, and many in the course of a few days became horrible objects; such as lay exposed to the sun turning nearly black, as well as being much swollen … Entirely to clear the ground of dead men and horses occupied period of ten or twelve days … The human bodies were for the most part thrown into large holes, fifteen or twenty feet square …

Soldiers who died alone, separated from their comrades, might not have been gathered up with the other dead and there is no doubt that many bodies were simply left to rot. This ossuary near the battlefield contains bones that have been discovered in the course of agricultural work over the years. Farmers may have lost their crops in 1815, but they were at least rewarded with bumper harvests in subsequent years. The bone meal and blood fertilised the fields wonderfully.

The advantages of bone meal were well-known and entrepreneurs ‘harvested’ the fields of Waterloo for the bones of the dead, which were ground up and sold as fertiliser. This was the view of The New Annual Register in 1822:

The oily substance, gradually evolving as the bone calcines, makes a more substantial manure than almost any other substance, particularly human bones. It is now ascertained beyond a doubt, by actual experiment upon an extensive scale, that a dead soldier is a most valuable article of commerce; and, for ought known to the contrary, the good farmers of Yorkshire are, in a great measure, indebted to the bones of their children for their daily bread.

How do we see these things today?

The reader who commented that I didn’t pay enough attention to the dead of Waterloo made a valid point. We look back at these battles and we see the red coats of the British infantry and the shining breastplates of the French currassiers and we tend to forget how terrible the whole business was. The books about James Burke were written as adventure stories, so it’s natural that there is more about the glory of war (and there definitely was some glory, if not as much as we remember) rather than the horror. Even so, with every book I wrote I found myself dwelling more on the dead and injured. In Burke at Waterloo one of my two main characters is injured in the battle and Burke finds himself reflecting on whether it was all worthwhile.

‘The war’s finally over, William. It seems unreal, somehow.’

‘But we’re going home, sir, safe and sound.’ He winced as his horse stumbled and his shoulder was jolted. ‘Well, almost sound. We saw off Napoleon and saved the world from tyranny.’

‘I suppose we did, William.’ And maybe they had. He didn’t know where Napoleon was now, but he was no longer Emperor of France. The Prussians were in Paris and Napoleon was on the run. Austria, Russia, Prussia, and Britain would carve up Europe between them. France had had its day of glory and nothing would ever be quite the same again.

William looked worried as he turned to Burke. ‘It’s been worth it, sir, hasn’t it?’

‘Oh, yes, William.’ He made sure to sound confident. It wouldn’t help for William to share his doubts. ‘It’s all been worth it.’

A reflective hero doesn’t necessarily sell (prove me wrong and buy the book) but the more you learn about the reality of 19th century warfare, the more reflective you tend to become.

Warfare now is generally less bloody than it was then – strange but true. Even so wars leave a lot of injured soldiers and the governments that sent them to fight and die are not always as generous as they might be when they return with shattered limbs and often enormous psychological trauma. Rightly or wrongly, British soldiers have been fighting in some very odd places in recent decades and that has left a lot of young people still needing help. At this time of year especially, we remember them.

Please give generously to the Poppy Appeal.