Lost in Talavera: what could possibly go wrong? 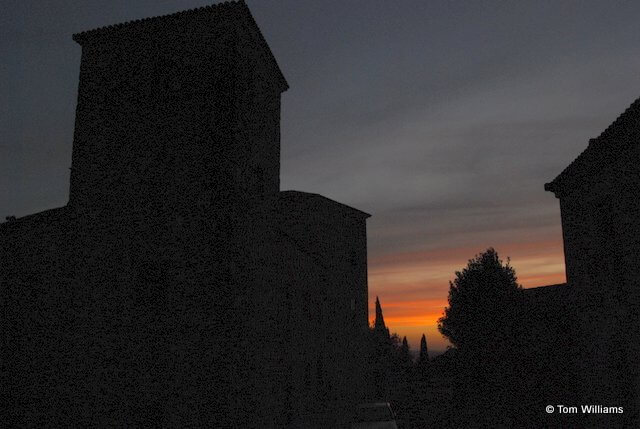 People seem to have enjoyed the accounts of my trip to Talavera which have popped up on various websites while I’ve been promoting Burke in the Peninsula. I’d like to say that the whole experience was massively less chaotic than I depicted it, but sadly my beloved was with me and she keeps a diary. So, for those who want the full, unvarnished story of the battlefield reconnaissance that never was, here’s her account, written at the time and including an even more embarrassing error.

Our notes for Day 2 said take the old road to Talavera. Look at battlefield. Continue to Trujillo, via fort at Oropesa.

Seemed like a lot, so we get into the car and set off, straight after a fantastic hotel breakfast. I can’t say I was exactly relaxed – I tensed every time we passed something – and even if I didn’t scream I did make little squeaky noises from time to time. But we reached Talavera without incident. Only problem – Tom had no idea where the battlefield was. A ridge going north from the town probably. We set off northwards, trying to find the road out of town. As we passed an Aldi, I suggest grabbing something to eat. Went in, found some pears and croissants and pork scratchings. Tom started to get antsy. “We need a drink,” he protested, “and we can’t hang around.”

I went to grab a drink as quickly as possible. There was a large one and a half litre bottle of something green and sparkly which advertised itself as “fresh apple”. It clearly wasn’t apple juice. It was probably some chemical, sweetened concoction, but I didn’t have time to try to find something better. Grabbed and paid.

Once we’d found the road, we drove to a ridge. Was it the ridge. Who knew? It was surprisingly steep and stony above the flat, dry plain. As we wandered around, lost, Tom said he was thirsty. I gave him the apple juice and he took a large gulp. “Yuck. It’s disgusting,” he said, handing it back.

Not that bad, surely. I’d give him all the tea I put in the flask and drink the stuff myself. I took a glug. Okay. Not a drink. Clearly some cleaning product. Closer inspection showed it to be fabric conditioner. With a poison warning on the back. If drunk, seek medical advice.

Tom was not amused. He said a lot on the subject. We tried to wash away the taste with tea. And check to see just how ill we felt. Not quite right. But not exactly sick. Maybe the poison warning was exaggerating.

We pressed on and wandered around the fort in tiny Oropesa, and admired the storks’ nests on the towers, and burped a strong chemical taste of apple. Found some cough sweets in my bag, which reduced the odd taste in our throats. By the time we got to Trujillo we were feeling quite cheerful. And not at all hungry. If you are ever on a diet I recommend fabric conditioner as an appetite suppressant.

It hadn’t actually been a bad day and Trujillo turned out to be absolutely stunning. It was February, but freakishly warm, so we had the place to ourselves and the weather to enjoy it. Tammy (whose diary does contain quite a lot of detail on food, even when not washed down by fabric conditioner) loved our romantic meal in the plaza and our hotel – a 16th century palacio – was one of the nicest places we’ve ever stayed.

The taste of harsh words and chemical apple was all forgotten.

Burke in the Peninsula

We were visiting Talavera because the battle features in the latest book about the adventures of James Burke, Burke in the Peninsula.

So far, the Burke books have avoided the Peninsular War, but the latest goes back to 1809. Fresh from his adventures in South America (Burke in the Land of Silver) James Burke is dispatched to join Wellesley’s army in the peninsula. To his disgust, he is not to be fighting as a regular soldier, but is again spying – this time travelling ahead of the army to try to build links with the Spanish guerrilla forces. But the conflict is a dirty war and Burke learns the hard way that not all the guerrillas are everything they might appear to be. It’s not long before he’s fighting for his life, but which of the Spaniards can he trust?

William Brown is with him, of course, but when the pair have to split up, Burke takes the war to the enemy behind French lines while Brown ends up fighting alongside the infantry at Talavera. Hence our trip.