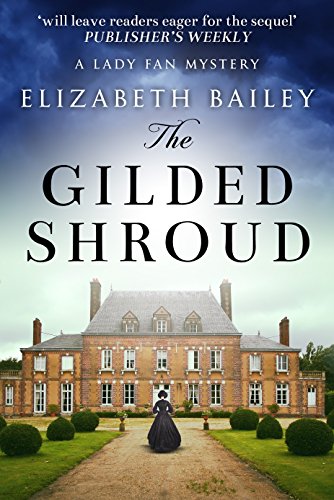 The Gilded Shroud is a classic Agatha Christie type murder mystery. Emily, Marchioness of Polbrook, has been strangled in her bed. Whodunnit? Her husband, who has apparently fled the scene? Her lover? One of her ex-lovers?

The family closes ranks but, numbed by the horror of events, they struggle to cope with the situation. Fortunately for them the Dowager Marchioness, acerbic but with a heart of gold, has just acquired a new companion, Ottilia, who is a veritable Sherlock Holmes.

The mechanics of the story work smoothly enough. There are clues to be found and suspects to be identified. It’s a little too easy. [Possible spoiler] As Ottilia herself says, it’s always a good idea to be suspicious of somebody who mysteriously turns up somewhere they were never supposed to have been.

There is a love story, too, and that also ticks along smoothly, although after chapters full of quickening pulses, rueful glances and warm smiles, this reader wished they would just, as the young folk say, get a room.

There’s a fair amount of period detail, which carried me along, although the Jane Austen enthusiast who advises me on such things suggested that some of the meals and meal times weren’t quite right for the period. The position of companion and its ambiguous status in households of the time allows Ottilia licence to cross social class divides and the exceptional state of the household allows the possibility of normal conventions being disregarded to an extent. Bailey takes full advantage of the possibilities here but, I felt, never pushes my suspension of disbelief too far. I suspect it may worry readers with more interest in social history.

It’s nicely written with the occasional insertion of words more likely to be seen in the 18th century than nowadays. (I particularly enjoyed “divagations”.) Bailey’s style, though is smooth and it is generally an easy read, though it would be easier if there weren’t occasional abrupt shifts in point of view that can leave you wondering for a moment whose eyes we are seeing the action through.

I can see that this book could well appeal to Jane Austen fans, classical romance enthusiasts, historical fiction buffs and people who enjoy a nice Agatha Christie. It should have appealed to me, but it didn’t. I found that the mechanics of the plot came between me and the characters. It’s difficult to say why. The characters are well drawn with decent back stories, but it’s all a little too smooth. We know, almost from the beginning, that the Dowager Marchioness may seem like a dragon but will be truly kind. We know that Otillia and Lord Francis will be engaged by the end of the book. We have a fair idea whodunnit, although the details of the how and why take a while to come out. It’s all a little too pat. The biggest mystery is why it’s called The Gilded Shroud, when no shroud, gilded or otherwise, features in the book.

That’s just me, though. I like some bite in my stories and this is more Pavlova then any substantial food. It’s also unfair to make a judgement on what is clearly intended as the first in a series of books. Introducing so many characters and making them credible, which Bailey by and large does, and then making the mechanics work so well leaves limited space for any deeper layering. The next book may well appeal to me more.

After reading even a short review like this, most people will know whether or not this is the kind of thing that will appeal to them. Those who like it will like it a lot. Those who don’t will hardly hate it, but will probably enjoy something a little more substantial.